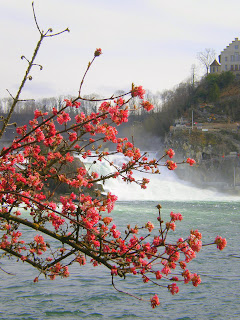 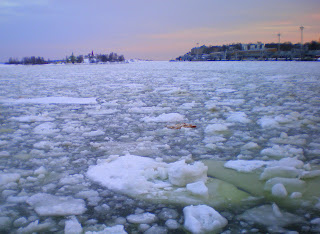 It's been a confusion of seasons, highlighted by the coincidence of spring gently breaking in Switzerland when I paid my visit to the Lucerne Easter Festival last week, and the Finns' toughest winter in 40 years just about holding on with the last of the dazzling sunny days up north in Helsinki, from which very lively city I've just returned. Above are the Rhine falls near Schaffhausen, ozonous clouds of spray chilling the mild air down by the river banks, and the harbour of Finland's capital through which the ships to Estonia and Sweden ice-plough their way.

I've now a plethora of overwhelming impressions to digest: Abbado, Dudamel, Harnoncourt at Lucerne; Sibelius's home of Ainola in deep snow, the most emotional four hours I've ever spent at a composer's house; the breadth and intensity of the Finnish musical and cultural scene, the easy charm of all the people I met there. More here and over on the Arts Desk anon.

Then it was back to London to see once again the Volga into which Janacek's and Ostrovsky's Katya Kabanova - commandingly sung and characterised by Patricia Racette, pictured below by Clive Barda - finally plunges in David Alden's ENO production. 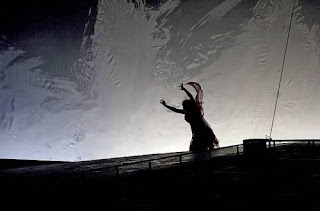 Musically, it was all there on the first night, as I tried with some struggles to articulate in my Arts Desk review. But throughout this evening's final performance, the extremes of the score as devotedly rendered by the ENO Orchestra under Mark Wigglesworth's electrifying baton, from the tenderest pianissimos to the most scary-exultant lovesurges, registered even more viscerally (J said this was all very purple. I've cut out a few adjectives and an adverb, but it still is. Shows how tough it is to do justice with words to something truly numinous in music).

Anyway, I've never heard Janacek more searchingly conducted, and that includes by Mackerras (whose last Katya at the Royal Opera felt a little low key to me). Well, we'll see how the great Janacekian fares with Vixen later this week. London is so lucky, though, to hear two such different Janacek masterpieces cheek by jowl.
Posted by David at 22:26