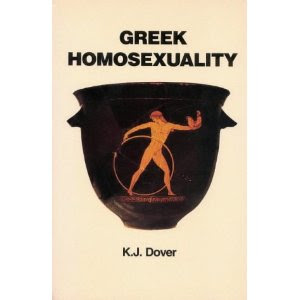 Professor Sir Kenneth J, that is, news of whose death last week reached me via The Spectator, which I picked up on the plane to Zurich. I can't think of much to say about Wolfgang Wagner or Lady Susana Walton, except that their deaths mark the ends of two very different musical reigns. Dover is different, and I'm glad I read a mag I usually avoid. My usual tirades against Tory raggery and the in-club melted when I encountered two articles pages in - one by Andrew Gilligan, eloquent on the pros and cons of the east London mosque, and the other by Peter Jones in defence of Dover, who it seems has had a rough time in some of the obits.

At university, we enjoyed his deBowdlerised, pithy, scholarly-salacious commentaries on Aristophanes - I just found my copy of Clouds and searched for a characteristic insight into bottoms like peach-fuzz. I didn't find it, but this is a flavoursome sample on l.1014. Forgive me if I don't spend time formatting the Greek words:

Muscular young people are commonly depicted in vase-paintings with buttocks jutting out above massive thighs, and apugos is a derogatory word. It was a standing joke against the Athenians that they wore down their buttocks by rowing, and in Frogs 1070f we encounter the idea that too much sitting around and talking 'wears down the buttocks' Posthen mikran: An abnormally small penis is characteristic of gods, heroes and youths on vase-paintings, an abnormally large one characteristic of barbarian slaves and of some kinds of satyr. Possibly the Greeks shared the common popular belief that there is a correlation between size of penis and sexual appetite.


Even this doesn't quite give the sense of what a marvellous stylist Dover was. He's quoted in the Spectator article, which I recommend you read in full. But I can't resist repeating a few words from the Preface to his, forgive the word, seminal Greek Homosexuality, published in 1978: 'I am fortunate in not experiencing moral shock or disgust at any genital act whatsoever, provided that it is welcome and agreeable to all the participants (whether they number one, two or more than two) ... no act is sanctified, and none is debased, simply by having a genital dimension.'

He sounds like the model of a humane being. I'd love to have met him.
Posted by David at 09:42

Sir K.J.'s book sounds like one I need to explore. My most extensive study into the topic has been via John Boswell, whose conclusions I know to be controversial, and refuted in books by other scholars.

SIr K.J. sounds like those old teachers of the Classics long gone now. I was fortunate to have a few, who use to make jokes in Greek or Latin and then for those of us who did not get them translate. Since I go to Greece every so often I would love to read his book but I wonder if it is still available.

There are quite a few copies at reasonable prices on Amazon, but what interests me even more is what another poster recommends below - Sir KJD's autobiography. Will be checking that out on abebooks.

Indeed. But I suspect a great deal of trouble would come about from not acting on those proclivities. And we won't begin on the Catholic church...

With me around here, that would be wise. :-)