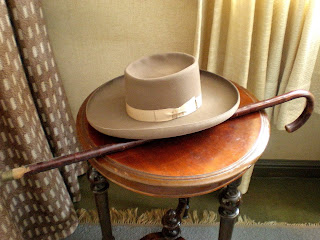 200 words in a BBC Music Magazine article on my top composer houses won't do justice to the four-plus wonderful hours I spent last Thursday at Ainola, the home of Jean and Aino Sibelius just outside Jarvenpaa, half an hour's commuter train journey from Helsinki. So I thought I'd expand on the house, the paintings and some extraordinary tributes from Sibelius's confreres in several blog entries over time.

Hilkka Helminen, the house-museum's director, met me on an icy Jarvenpaa station platform in clear blue skies - the last day, as it turned out, of the extended Finnish winter. Her love and enthusiasm for the spirit of place seemed to be reflected by the other Finns I met - with one exception, who found the house 'oppressive'. I couldn't have disagreed with him more. On a sunny winter day, with the snow gleaming outside, light flooded in from all the big windows of Lars Sonck's humble national-romantic construction. 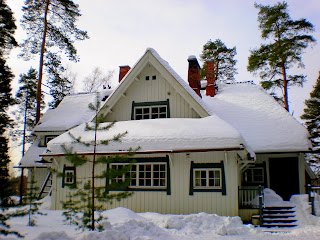 You approach the house up a snowy track through the wooded hill - or rather I, and a few privileged others, did at this time of year because it's only open to the public from May to September (the last visitors to sign the guest book were Olli Mustonen and his family). Without the cordons that marshal the many visitors in season, and with only Hilkka to guide me, it was just like being welcomed into someone's home by the housekeeper when the hosts were absent. Because Sibelius and his wife lived here from 1904 until his peaceful death in the downstairs bedroom on 20 September 1957, and because, following Aino's death at the age of nearly 98 in 1969, the descendants - who still visit and celebrate on birthdays - passed it on to the Finnish state with all contents intact, it has more the feel of a great artist's living home than any I've visited. 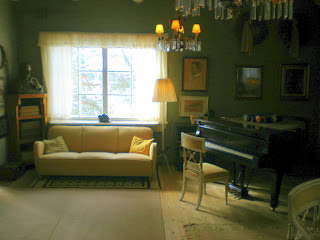 The drawing room is a homely mixture of inherited antique furniture, striking paintings and, crucially, the Steinway grand which replaced an upright in 1915, when 144 admirers of Sibelius clubbed together to buy it for his 50th birthday. 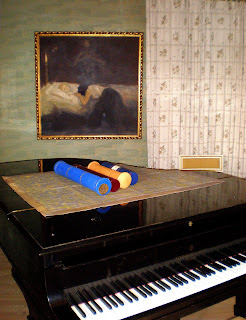 Curiously, the keyboard faces a grim painting, Rukous or Prayer by Oscar Parviainen, in which a young girl is claimed by death just as in Kuolema - and in real life, though the Sibeliuses' third daughter Kirsti was little more than a year old when she died. He claimed that he needed the reminder every day when he sat at the piano. No photograph was taken, so upstairs in Aino's bedroom, part of the house not open to the public, Kirsti is represented above the five daughters who lived by a Van Dyck child. 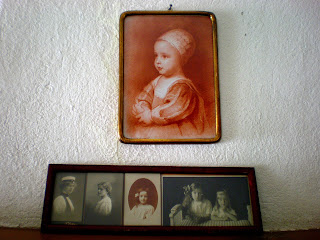 I'll mention some of the other pictures in a later entry. Now we move into the dining room, pictured with Hilkka in the foreground. 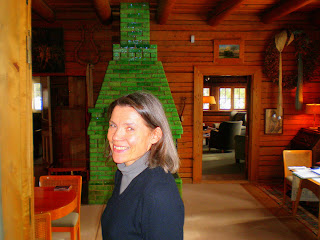 The great green fireplace is one of only two features on which Sibelius himself insisted. Apparently he 'heard' its colour in F major - I didn't know about his synesthesia - just as another Parviainen of a funeral cortege to the left apparently resounded in D major. The dining table is seen below with more treasure paintings behind lining the staircase wall 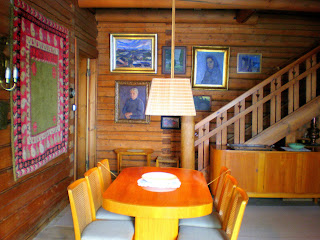 while a small table and a window seat helped me to place that 1915 photo I posted back in 2008 when I was working on Sibelius 6 for Radio 3's Building a Library. 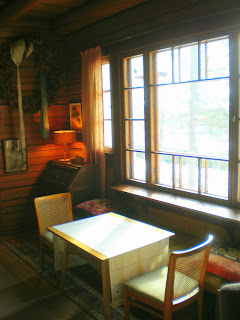 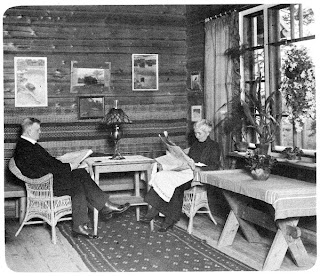 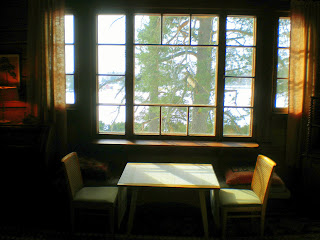 Off the dining room is the big kitchen and the room for the two servants who stayed with the Sibeliuses for most of their time here and the bedroom in which Sibelius died with his second study (the first was upstairs), his familiar hat and cane on a chair in the corner (pictured above). 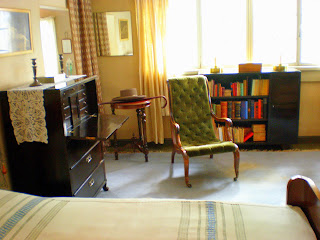 Adjoining bedroom and dining room is the comfortable library, converted from children's rooms in 1935. 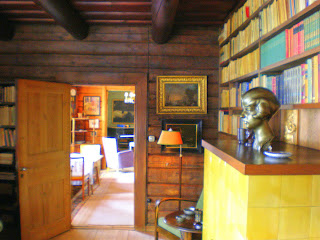 I could hardly believe I was seeing the original of the triptych with the missing third panel by the great Akseli Gallen-Kallela. 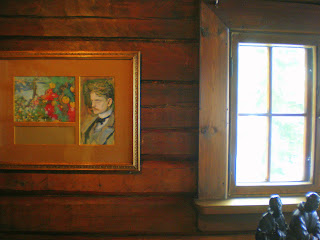 It contains his symbolic (mis)interpretation of Sibelius's 'fairy tale' En Saga with the tousled, attractive portrait and the empty panel which Sibelius refused to fill with a quotation from the tone poem. More anon on the books and the gramophone collection.

We spent the whole morning there, and I was very surprised when Hilkka offered a return visit after lunch at the excellent catering school nearby. This was when we went through the contents of the 78s and I discovered still more wonders. She was also game enough to accompany me through the thigh-deep snow to the site of the graves of Sibelius and Aino, covered at this time of year, of course 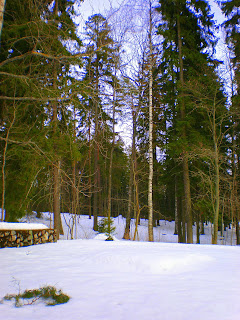 and the sauna, designed by the multitalented Aino (whose gardening skills were not, of course, evident at this time of year). 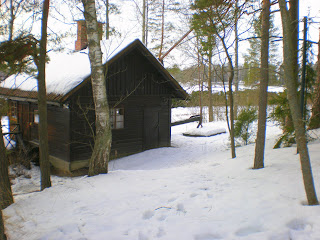 It wasn't until 3.30 that Hilkka dropped me back at Jarvenpaa station. 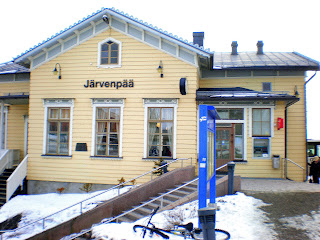 I was rather amused by this quartet - the old stationmaster and his wife in the photos on the wall, the new generation beneath - in the comfortable waiting room. 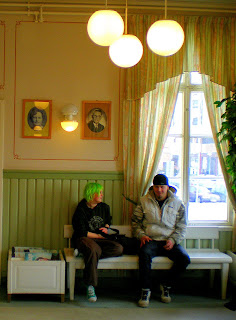 Then I labelled my thoughts on the crowded train back, Luonnotar once again running through my head as it had on the outward journey, before stepping out at Helsinki's famous Central Station, designed by Eliel Saarinen and opened in 1919. 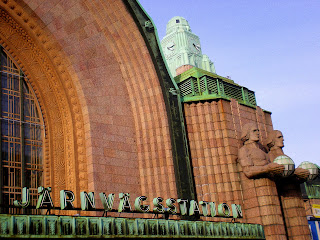 To help plan your essential trip to Jarvenpaa, there are further details and photos on the Ainola website. More can be found on the individual artworks at www.sibelius.fi.
Posted by David at 10:43

Crikey, David, how lucky were you. Great pics again.

Hi Mr Nice, I'm writing to let you know, with much apology, that I've "borrowed" your beautiful photograph of Sibelius's hat and cane at the top of this post, and used it in a video I made in tribute to the composer.

Your photograph occurs at the end of the video. You can watch it here: http://www.youtube.com/watch?v=b9pIftsHVHU

And I've also blogged about it here http://dustofhue.com/2010/06/music-video-ossia-from-tempest/

The photo has been desaturated to match the mood of the video. I've also acknowledged that its source is yourself and your blog, in the credits.

Once again, my apologies for not asking in advance. :( I hope you like what I've done, and allow me to keep the video as it is! Last but not least, I enjoyed your post very much!

Not at all, Leon, especially as you've gone to the trouble of crediting. It's always nice to know - preferably beforehand, but your gracious message has more than made amends.

Suppose I ought to put up a 'fair use' comment, but by and large, people are honest, I hope.

I'll look at the film when I get a moment later.

Thank you :) I'll be sure to be more careful next time. I chose your photo for a very specific reason. If you watch the video, you'll see why - I hope. I tried to find a similar alternative, but none presented itself. Your photo was the one that got the message across, perfectly.

Once again, my sincere apologies and many thanks!

I watched it, and I loved it. I wish more folk would pay attention to that short but profound Tempest epilogue: we had one hour's worth of the music excellently conducted in the Barbican by John Storgards, with an adapted version of the play; but they ended where the suites do, with the tempest music. Completely wrong.

Best wishes for your future ventures. You can't go wrong with Sibelius as your guide.

Thank you so much for your encouragement, I really appreciate it! I'm honoured to have you as part of my (video) mission to promote this little gem of a piece.

May I have your permission for re-print the Sibelius' photos shown on your blog?

I have written an article in Mandarin language and would like have the photos mentioned above to be included in my article and it will be published in Taiwan in a later date.

By the way, Ms. Hilkiki, the director of Ainola, has granted me photos' permission last week.

I am a retired structural engineer and has being a music lover for over 20 years.

Thank you in advace for your soonest reply.

Thanks for asking permission. Please do, giving a credit if you would, please, and a link if possible, and could I ask you to do me the courtesy of letting me know when the article appears?

Thank you so much.

I will mail you a copy once it's published next year.

Is credit captioned as "Courtesy of David Nice (davidnice.blogspot.com)" OK?

Yes, of course, Amy, thanks for the courtesy.

David,
Would love to repost image "Helsinki 2010 048" with a Brennan Manning quote on FB. Not selling anything, well, continuing to try to transmit through the words of Manning and your beautiful image the idea of unconditional love & unconditional welcome to "the table"; but that's it. "Courtesy of David Nice (davidnice.blogspot.com) of course give the credit: Thanks so much!! PDK

Hello David, I have posted the link to this page to my Facebook group dedicated to Jean Sibelius.
Link : https://www.facebook.com/groups/594873430534189/
I note you resist Facebook yourself, so if you have objections I will of course remove it. I love reading your articles, thank you so much,

No, Susan, always happy to share a love of the great master, and thank you. Don't forget there are many more 'Sibelius at home' posts after this one...I just couldn't stop. It was a privileged four hours indeed I had at Ainola.