Stars and shoes of the BBC 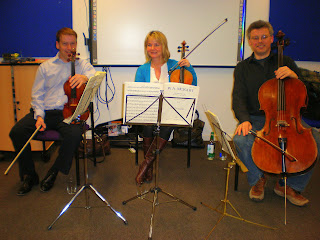 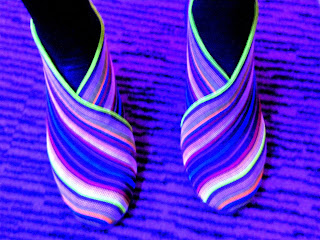 Strictly speaking, every player of the BBC Symphony Orchestra is a star, but we've been privileged to discover how many of these modest souls shine in chamber music thanks to my BBCSO course at the City Lit. Following top soloists, two string quartets and two different viola ensembles, we had a visit on Tuesday from one of the orchestra's two leaders, Stephen Bryant, along with viola-player Mary Whittle and cellist Mark Sheridan, regular course visitor (pictured above Emily Kershaw's shoes, of which more below).

After a long rehearsal sawing away at Wolfgang Rihm, whose taxing, tiring music I couldn't quite face yesterday, and a couple of hours' practice in a Keeley Street rehearsal room, these dauntless heroes of the musical world treated us to two movements from Mozart's E flat String Trio. They were tackling it for the first time and it was tough work, they told us, playing in E flat, though the key does bring out special qualities and certainly Mozart at the peak of his powers would have known what he was doing.

All three had interesting things to say about playing Rihm and his colleagues, who interfere with the line they need for the classics. I think they were just as interested to know what the students thought; it turns out these players really want the feedback, and even intend to set up a BBC Symphony club with two of their number taking the initiative. Self-effacing Stephen is, I'm told, as adored and respected a leader among his fellow musicians as Andrew Haveron. And just as Andrew had the chance to shine in Korngold's Violin Concerto a couple of weeks back, his colleague will be giving the UK premiere of a new work by Detlev Glanert in the 2010-11 season (curiously, he did exactly the same for the Korngold). He's promised to come back and take us through its demands, so we'll hold him to that.

Over at the Barbican two nights later, Sir Nick Kenyon and colleagues unveiled plans for their forthcoming season, which means more of the same with a few new superstars thrown into the mix. I have to say I was most intrigued by the shoes of a very glamorous lady standing in front of me, before I realised she was that vivacious Radio 3 producer Emily Kershaw. I explained I was no foot fetishist, and the name 'Manolo Blahnik' meaned nothing to me until I watched Sex and the City, before snapping at her heels.

The fluorescent lighting of the Fountain Room showed them up in their best possible light. The above, ever so slightly fuzzy, was taken senza flash; using it reveals a still quite colourful reality. Em has just pointed me in the direction of many more shoes of this ilk and others in quite a different style on the United Nude website. May come in useful if I seek presents for the goddaughters (though haven't even glanced at the prices). 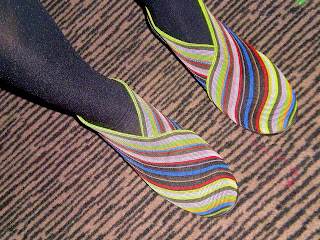 Oh, that Barbican carpet. Anyway, Emily's shoes were the highlight of the evening along with sparky Jeremy Denk in the Stravinsky Concerto for Piano and Wind. Denk-by-nature's durchgespielt Prokofiev Visions fugitives had been the highlight of what I heard at the 2008 Bard Festival, and this was no less challenging. 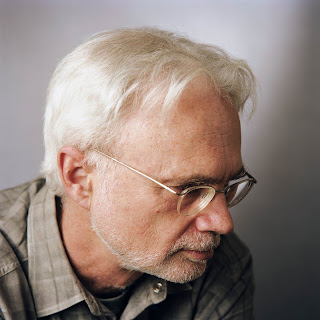 A shame the baton of John Adams, photographed above by Margaretta Mitchell, is not as accomplished as his poetic pen, and really doesn't need to be used to beat time so much. But his City Noir was entertaining and luminous enough; it's more of the same, but with Adams that's usually a beguiling same, as I wrote in my Arts Desk review.
Posted by David at 12:39

Wow - what shoes! They quite upstage all else.

Then paint them, dear Julie...