First Lord of the Savoyards 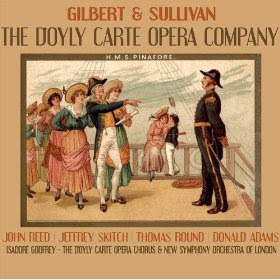 Distinguished death of the week would have to be that of Michael Foot, plain 'Mister' to the end of his days (not that the BBC's wider readership was much interested, since 'most read' item at the time remained 'Mutya applies for Sugarbabes name'). Of more personal resonance for me, however, was the passing of John Reed. When I was a lad, he ruled the waves as master of the queen's patter in the guise of Lord High Executioner, First Lord of the Admiralty and Lord Chancellor, to name but three. Read the Guardian obit here, where it's especially cheering to read that 'he is survived by his companion of 52 years, Nicholas Kerri'.

I guess I must have seen most of Reed's performances on visits to the D'Oyly Carte shows at Sadler's Wells; certainly I remember, for their rarity value, his Sorcerer, John Wellington Wells, and grumbling old Gama, Princess Ida's father. Most influential on me, though, was the Reed version of Sir Joseph Porter, which I mimicked as much as I could in the Banstead Junior School production of HMS Pinafore. I don't think I even grasped the basic gist of the big number, but I got all the stresses, and the delay on 'stick close to your desks...and never go to sea', thanks to the Isidore Godfrey recording. 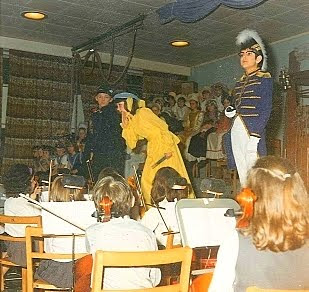 Here I am, a cocky ten year old, in mama's splendid costume (real ostrich feather in the hat), looking haughtily away as the Josephine of Julie Wilkinson declares in aside 'he little thinks how eloquently he has pleaded his rival's cause!'

It was, I reckon, a fine achievement for a humble primary school, even if the orchestra consisted of nothing but recorders, cellos (the only instrument actually taught by a visiting player) and inspirational Mr Soper the music master on the piano. A tatty old C120 cassette which I've had transferred to CD bears witness to my piping treble former self (though no record remains of 'Hear my prayer' and the really serious stuff, which I'd be curious to hear to know if I was a little Ernest Lough or not). Over three decades later, I was still hankering for the John Reed slot, showing off in the Lord Chancellor's Nightmare Song at Charleston. We're speculating about Lehrer's Periodic Table for this summer's show, but they need to speak to my agent first. 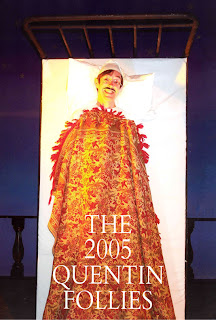 As for the Reed style, the best I could find on YouTube was this rather witty, sub-Gilliam animated film to his performance of the Major General's Song. A pity the artist couldn't fit in Gerrit Dou (Gilbert's 'Gerald Dow') and Zoffany as well as Raphael, but the end result is rather good.

Still in Victorian topsy-turveydom, took an afternoon off yesterday and perused, among other treasures, the Lewis Carroll cases in the British Library. Currently on show there is Carroll's original handwritten Alice's Adventures Under Ground, minus the Mad Hatter, the Cheshire Cat and the Duchess, who appeared in the expanded masterpiece with Tenniel's illustrations of genius. 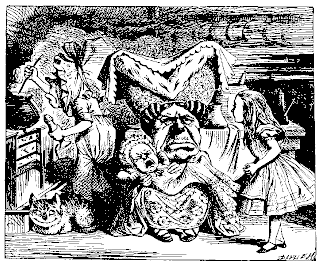 Tenniel had to invent those for himself, but he followed Carroll's wacky amateur drawings rather faithfully for the rest. What else did I learn at the BL? That Nabokov translated the fantasy into Russian as Anya in the Land of Wonders. And not much else. Inevitably the display ended with designs for the new Tim Burton film, which are fine as far as they go. But it sounds like a splashy treatment of a taut original, so I've no desire to go and see it (much as I surprised myself by admiring Burton's very original take on Sondheim's Sweeney Todd). Behold, on the other hand, how much a humble early filmmaker in 1903 was able to make of Alice in nine minutes with limited means. Do stick it out for the incident of the Mad Hatter and the March Hare trying to cram the Dormouse into the teapot, and for the kids as cards.

Messageposter Jane Irwin suggested I watch the Jan Svankmajer Alice, which I've been meaning to do for years. I finally took a peep on YouTube. It's weird, weird, weird, and encourages me to get the full thing:

Well, David, how courageous of you to submit your youthful self to public scrutiny. I'm sure you were excellent.

No, Jane, I don't, and it's an absence I've long wanted to remedy. Maybe I'll spoil my pleasure in the whole if I look out a few clips on YouTube.

I always find the word 'companion' a little bit euphemistic and dispiriting.

By the way, you will be horrified to learn that you misspelled 'Sugababes'.

Agreed, 'companion' goes back to earlier times. 'Boyfriend' sounds odd over 50 years. 'Husband' makes my toes curl. 'Partner' would do me fine, even if it sometimes sounds businesslike. When people ask if I'm married, I say I'm civilly partnered. But I've no idea if JR and his other half - there's the real phrase - took the plunge or not.

Devastating news, maybe not in tune with the flippancy here - I just heard that the great Philip Langridge died last night. There'll be room for tributes anon.