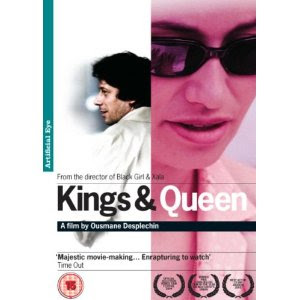 ...there were a couple of astounding Dogma films to maintain the unfashionable tradition of true soul-scouring movies. But Lars von Trier is erratic, to say the least, if always compulsive (though I can't steel myself to see the latest).

Yet it struck me, watching first Arnaud Desplechin's A Christmas Tale and then working back through the other films starring the ineffable Emmanuelle Devos and sexy, compelling Mathieu Amalric, that here at last was a filmmaker prepared to plumb the depths (no idea, by the way, why he's called 'Ousmane Desplechin' on the above DVD cover). Sure enough, in interview, Desplechin invokes Bergman - Ingrid as well as Ingmar, by virtue of her fearlessness in presenting a woman who is neither directly sympathetic nor cuddly, as he maintains they mostly are in the recent movies he's seen (Notorious was the film of choice).

If this suggests that Rois et Reine, the most recent Desplechin movie I've caught up with, is grim, that's far from the case. There's an edgy humour which applies especially to Amalric's manic-depressive hero. I slightly regret having to pass over the bewitching Devos in favour of Deneuve's cameo psychiatrist, but this little scene gives a good sample of dialogue which you never know whether to laugh or shout about. Click a second time on the screen to catch the full picture on YouTube.

In addition, the lighting in the cinematography is extraordinary, the script sometimes infuriating in that edge-of-pretentious French way but always engaging, the flashback technique and a very Bergmanesque ghost visit haunting.

Who's doing this sort of thing in literature? Back into the picture comes Hilary Mantel. Since I last wrote about my discovery, I've read a few more of her unpredictable novels, including the most vivid, as-if-it-were-yesterday of historical novels, Wolf Hall. No Mantel subject is anything like the one before it, but in terms of emotional range, asking the difficult questions and weaving an elegant polyphony of voices, family chronicles don't come any richer than A Change of Climate. 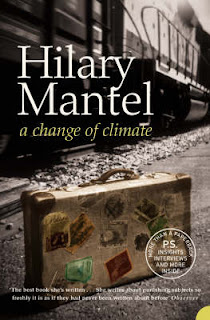 I just finished it this morning, and the last twenty or so pages have to be the most poignant of crisis fallouts in any novel; I'm too close to it to say more about subject or style except that I worship this woman and I won't stop until I've read everything she's written. As A Place of Greater Safety is still on the list, evidently I have great riches in store.
Posted by David at 11:17

I realize that this is something entirely different, but, since you are discussing films, do WWII-Era ones actually about the war interest you at all? I have liked _Thirty_ _Seconds_ _Over_ _Tokyo_ since first hearing it on a PBS channel in the 90's, and now have it on DVD! I subsequently learned, or was reminded, that this film quite-accurately depicts what happened before, during and after the Doolittle Raids (though some of its lighter and sentimental moments were questioned by one, yet I personally _LIKE_ the love scenes, especially the one at the end)), and so, being somewhat interested in the war, wonder if there are any other such accurate films, particularly about the war in Europe and Africa since this one covers something in the Pacific, though other Pacific accounts would be welcome as well, and, though not actually from the era, would be at least curious to hear _HBO's_ _The_ _Pacific_ once it is issued on DVD since I have neither cable nor DSL television. Obviously I hope that those for which VW provided music fall in to that basic category! And we should not overlook Walton either!

I'm sure that films like the one you mention are of huge historical interest (and maybe aesthetic). I'm interested in the critical ones, like Life and Death of Colonel Blimp. The most shocking war film ever is surely Elem Klimov's Come and See, about a young boy who joins the Byelorussian partisans. So visceral and upsetting.

I have now read some reviews of that film on Amazon, and, on the strength of those, would probably rent it at least, were it not for the facts that I know virtually no Russian and only a little German, and could not see what are apparently the all-important visuals. Yet, despite having been produced by Soviets, it is apparently quite accurate. One reviewer, when responding to a criticism that this film was propagandist, responded by telling of a scene near, or at, its end, where someone shoots at Hitler at various stages of his life, but declines to shoot him as a child. Had it been propagandist, this reviewer asserted, the child would have been shot as well, thus making Hitler all bad and the Soviets all good. Yet the child is not shot, thus showing that there is potential for manifestations of both good and evil in all of us.

JV is such a good contributor to these exchanges that I criticise rather sadly but he will NOT get the correct view of the war in the Pacific - or anywhere - by viewing fiction. David Nice has reversed what I believe to be true.....some of these films can be splendid aesthetically but misleading historically. Every accented word, every movement in the body language is likely to be wrong - indeed will be wrong.

In the case of the Doolittle raid this may not matter but if there were a film about - for example -the decision to drop the atom bomb the matter is so important that no film should ever be made. The thoughts of Truman, the Emperor, the Japanese Army chiefs, Stalin etc are crucial to judging this vital event. They can never be reproduced without error and indeed gross error - especially as some actions of great importance may be dramatically weak. The minutes of the various Imperial conferences would not make good theatre - unless dealt with selectively and therefore inaccurately

People laugh when the hear a reference to George III, but what do they know except from the film?

In a radio programme about the 1944attempt on the life of Hitler, the discussants agreed that the plot had to be changed around a bit to make a better film

Hmmm - dramatic truth vs historic truth. At its best, and I'll admit that rarely happens, dramatisation can at least try to get behind the public figures whose speeches are all we have, even if that will only be the creator's imagination at work. Viz Hilary Mantel's Wolf Hall, which is a masterpiece of the imagination but which I rather fear has 'screenplay' written all over it,