Just dreadful, I know, but I could think of no better way to announce an Easter weekend journey from a Sevres egg in the Gilbert collection at the V&A 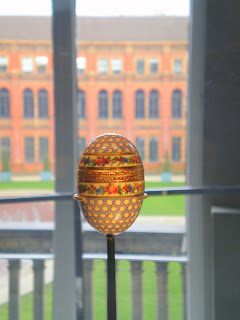 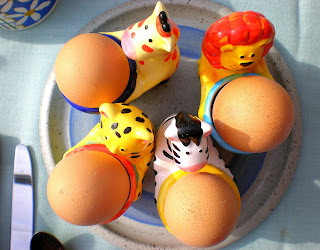 which duly nourished us enough to tramp across ovoid pebbles on the beach near Sheringham. 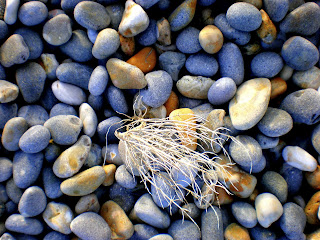 Contrary to prognostication, Saturday and Sunday afternoons were glorious up on the north Norfolk coast, with nothing but sun and sand on Holkham Beach and the tide retreating as we walked along cliff (yes, cliff - our first in this neck of the woods, as we've never gone so far east from King's Lynn before) and shoreline from Weybourne to Sheringham and back. 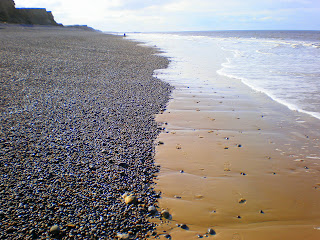 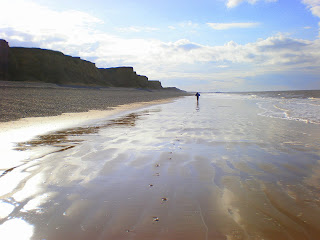 We left behind music, but not music talk, since our hosts, the delightful Susie Self and Michael Christie, are very much so inclined. Susie's a voluptuous mezzo whom J has known since Glyndebourne chorus days, and whom I first saw in solo action as Baba the Turk for Opera Factory (complete with chestwig), but she also composes, paints and teaches holistic singing in peaceful places like Skyros and Esalen, California, as well as North London; Michael's a cellist, composer, teacher and webmaster. Take a look at their Selfmademusic website, and do hear this evocative first track from Susie's latest album, Seachanges, complete with Big Sur cinematography:

More divadom: I was utterly captivated, as who could not be, by the free and easy manner of Roberta Alexander, whom J and Susie knew from the 1990 Glyndebourne Jenufa, and Claron McFadden in their Bernstein concert on Wednesday. I'd found no publicity shot of them either together or with the excellent pianist, Reinild Mees. Instead, I asked the Southbank's indefatigable classical press man, Dennis Chang, to facilitate an amateur photoshoot after the concert so that I could use one to head my Arts Desk piece. 'Fine', said Roberta, 'but on one condition - you give us a good review'. How could it not be good, I replied with no flattery, but just in case, maybe they could scowl in one photo and smile in another to cover all contingencies. Here's one TAD rejected because it was slightly blurrier than the others, but it's perhaps the best of all three ladies.


Stop press: I have a nasty feeling it's not going to be exactly Prima Donnaworthy stuff when I brave the first performance in London of Rufus Wainwright's opera on Monday. Just heard Janis Kelly on Radio 3 singing the last aria, and though she does her stylish best, what came to mind in her 'Feux d'artifice' was Anna Russell's French song spoof, 'La plume de ma tante'. Sean Rafferty effused about how terribly moving it was etc, yet I felt I might get the giggles in the performance. Which is a shame because I do so like many of the songs on Wants One and Two. But let's not prejudge...
Posted by David at 15:33

Tenuous Youtube connections. Eggs lead to chickens so have this one

Cool's the word, Sebastian: a perfect mid-afternoon interlude, thank you. But tell me a few things: 1) who's who, 2) why 'chicken' (why not?), 3) can you tell me if the weird comment 'these guys shit﻿ on today's jazz-rock' is meant to be in the players' favour, or agin 'em?

Wonderful review - thanks! I heard the same concert last year. Claron McFadden was ill, and cancelled at the last moment, so Roberta Alexander had to sing everything on the progam herself! No Glitter and be gay, though. It was right after Obama's inauguration, and she opened with Take Care of This House - I'll never forget that.

Her greatest role on stage for me was Pamina - the year I started to go to opera, in 1980.

Thanks for that, Buster. RA was, as I mentioned in the review, very moving and direct about the connection between 'Take care of this house' and Obama. A few tears were shed, I can tell you.

How lucky you were to see her Pamina - truthfulness incarnate, I'd imagine. So was her Jenufa. And I still treasure the Bernstein songs disc, which was released, can we believe it, in 1986...Now she has even more colours in the voice and still that sweetish top when she doesn't push it too much. I adore both those singers.

The bass player and the composer of The Chicken is Jaco Pastorius, the guitarist is John Scofield, and I'll need help with thedrummer

That's the name of the Pastorius tune

3) can you tell me if the weird comment 'these guys shit﻿ on today's jazz-rock' is meant to be in the players' favour, or agin 'em?

Definitely in Pastorius' favour. Older is deemed better. It's the inverse of C S Lewis's concept of "chronological snobbery."

I hope that helps!

Thanks, Sebastian, and not to worry about the drummer. Yes, I gathered 'Chicken' was the number's title, but wondered why. 'Funky', perhaps? But maybe there doesn't have to be a reason.

Wondered what you thought of Krystie Warren. Saw her on an 'American Songbook' concert last night, BBC4, and was amazed.

Unfortunately, we never heard her Janacek here. For one reason or another she was always rare on the stage of the Netherlands Opera. Our loss, I am afraid, and difficult to understand.
Best,

At least her Glyndebourne Jenufa is preserved for posterity, with the equally wonderful Anja Silja and late, lamented Philip Langridge (whom she was quick to mention backstage on Wednesday). It's probably my number one opera DVD, and certainly the one I'd recommend to theatregoers unused to opera.

She and Langridge were in an Oscar Wilde opera together a long time ago - Langridge as Dorian Gray, and Alexander as Sibyl Vane. Did not see it, unfortunately.

I'll have to look at that entire Jenufa DVD - only saw snippets of it on youtube.

Yes, that Jenufa is sensational. I'm also a huge fan of Alexander's Donna Elvira on the unjustly neglected Harnoncourt DG. Very envious that you got to hang out with her.

So, you're seeing Prima Donna on Monday, huh? Wednesday for me. I've not heard a note of it yet...

I love that Glyndebourne Jenufa, not least for the way the crowd is directed in the third act after the exit of the Kostelnicka.

I was very lucky to have Ms. Alexander as Vitellia in Clemenza di Tito at the MET (with the great Tatiana Troyanos and David Rendall). The role held absolutely no terrors for her; it was a virtually perfect performance.

Interesting, Will: I'd love to have heard RA sing something florid, though I must investigate the Harnoncourt Don G mentioned by Jon - her Donna Elvira would give some idea of this, though that's assuming 'Mi tradi' is included, which it isn't always.

forgettable - for now, yes. I had to look the man up:

David, even if Mi Tradi isn't included (a real possibility given an "authentic" conductor in that recording) Elvira's entrance aria and Fuggi, Traditor should give a good idea of what Alexander can do.

The late great Mr Pastorius was a big fan of r'n'b and The Chicken was one his favourite live showstoppers, but it was written by saxophonist Pee Wee Ellis in 1969 when he was in "godfather of funk" James Brown's band.

The drummer was unknown to me although I found him on google easily. The Funky Chicken was a hit by Rufus Thomas (of Walkin' the Dog fame) also from 1969. So which came first, the Chicken or the Funky Chicken - will we ever care? Guitarist Sco is on this week's Jazz File with Alyn Shipton, well worth a listen I'd say.

Ironically, and volcanically, Claire was in Pompeii with a school party last week, but got home over land and sea barely more than a day late !