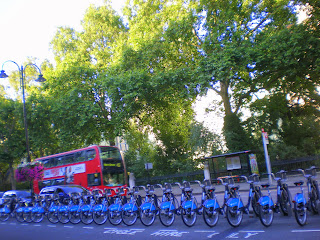 They're here in town, whether standing in their serried ranks of Barclay's blue or wobbling under the weight of a novice. I saw my first one (novice, that is) in Kensington Gardens yesterday - uncertain but very jolly as I passed and welcomed her to the joys of London biking. And I spied the first stable on Saturday as I cycled on my own bike to the Sondheim Prom, so I snapped them.

Who knows, I might even use the scheme myself if there are occasions when I want to cycle to a venue and not back again. It's not exactly cheap. But fundamentally it's something we salute curate's-egg Mayor of London Boris Johnson for introducing. 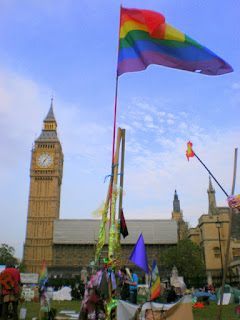 Much more ambivalent about his abolition of the peace camp which showed its rainbow colours outside the seat of power for several months and even grew a thing or two in Parliament Square. 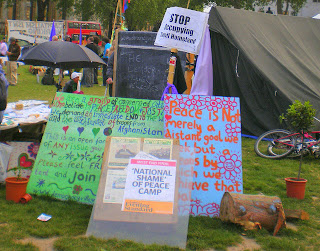 It was an uneasy realpolitik coalition of anti-war protesters, rightfully (in my view) wrathful objectors to treatment of immigrants, and a few disaffected anti-everythingers who got very drunk and abusive and spoilt it for everybody else. 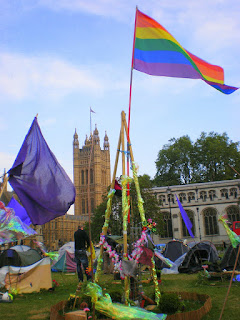 As I ambled around a few weeks back, I didn't exactly feel comfortable (and my snapping wasn't what they objected to, as no-one noticed). But believe me, one protest I will be joining is the one when the Pope comes here in September. And I salute our American friends on the overturning of California's Proposition 8 opposed to gay marriage, something to celebrate and the first item on the BBC World Service news this morning. 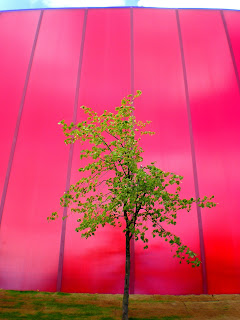 Finally, another bright idea which I like but don't quite love as I did the first of the Serpentine Pavilions by Toyo Ito, nor believe quite works as daring architecture as did Frank Gehry's departure from the norm two years ago. This is Jean Nouvel's red devil. 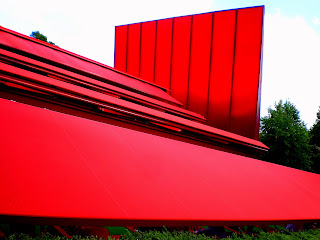 I liked the table-tennis tables outside, and the different seating zones, though the cafe staff were in chaos when I visited, and J said that there was a fundraiser chugging* visitors for money, which he thought was a bit of a swiz when you're already paying inflated prices by patronising the cafe. And if you're going to offer something no(u)vel and beautiful to the public, do it with a good grace. 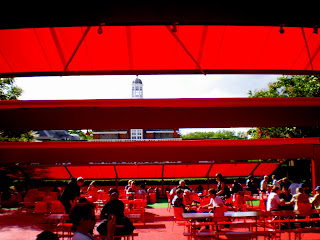 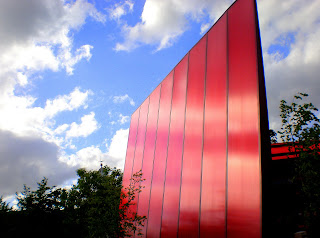 *charity mugging
Posted by David at 14:45

More info on what's really happening in London than a forest of broadsheets - thank you, David!
We've had les Vélos blues in Nice since Jan '09; looks like we've got the same/similar model to Boris's bikes (oops; could be misconstrued, that ;-)). They're very popular. And cheaper; but subscription method is - you guessed ...
Yes, seems the loonies spoilt things on the Green. Although after being peace campaigner myself ('01-'06), I discovered so many have strange bedfellows (of the violently anti-democratic, misogynistic & homophobic variety).
With you on papal protest: aux armes!
The new building: all that RED - shouty?
Can one go anywhere without being mugged by charities? As they're nearly all government-funded bodies, shouldn't we be told where the money's going? Safe bet v little of it goes to object(s) of the exercise, given level of marketing spend alone.
As a former London cycling commuter, I salute you - 2 wheels, good; 4 wheels, bad - bon weekend!

It was even a bit of a misnomer, 'chugging': I can't see why this was a charity, other than providing a service to the public which they weren't expecting to pay for.

Shouty, yes - good one. The idea was to catch that colour when the sun dazzles you. But it's a bit intense for a whole summer's afternoon unwinding...

Interesting what you say about the peaceniks' bedfellows. Here the soldiery or the soldiers' families are of course involved, so that would involve a bit of homophobia.

Thank you for the clarifications, D - yes, that chugging (great word!) struck me as a form of exploitation (so nothing to do with charity then!).
Ah, wasn't thinking of armed forces (who have my sympathy & admiration; although I wish they didn't have to exist). No, had in mind the like of Lauren Booth and her Press TV chums.