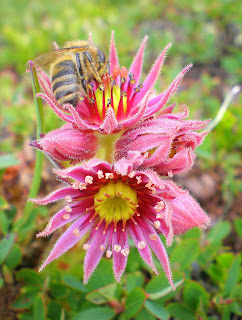 Somehow even when I'd rambled on about Verbier for The Arts Desk, I found there were peaks of the experience I'd still missed out. Who knows if Sarah Chang, Nicolas Angelich and company in Pfitzner and Saint-Saens might not have been another such? I can't regret not having experienced it when my time on that last morning was spent up in the heights gaping at rocky perspectives and looking down at Alpine flowers like the above which I wish I was able to identify (a study, or at least a little book on the subject, beckons).

Anyway, in anatomising what went wrong with the performance of Strauss's Don Quixote on Sunday night, for all its sturdy guidance by Dutoit, I quite forgot to wax passionate about one of the greatest living violinists, Leonidas Kavakos, in the Bartok Second Violin Concerto of the first half. 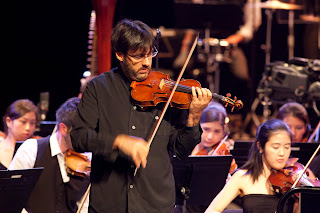 Such a collegial chap (pictured above for the festival by Nicolas Brodard, who also took the shot of Gringolts and Suzuki below), bending in to his fellow musicians: just the kind of soloist a youth orchestra needs. But quite apart from that, what a sound. I heard him play the concerto last year at the Proms with even more idiomatic partners, Ivan Fischer and the Budapest Festival Orchestra. Yet oddly this time I didn't fidget so much at Bartok's late cut-and-paste technique, perhaps because I was virtually under this compelling player's nose. And there's a special magic about a solo encore given possibly even more for the benefit of the orchestra than for the audience. The most moving thing of all was to watch the young musicians so immobile and intent, hanging on every note. Of whatever it was. Ysaye, perhaps? I confess my ignorance.

Later: aren't YouTube and medici.tv a wonderful thing? Here it ia already. And, yes, Ysaye was a good guess, as it transpires. You'll probably need to click on the screen to get the original YouTube full format.

And then Leonskaja to follow in one of the most ineffable of all Schubert sonatas, D959 with its time-suspending, and timequaked, slow movement (Aline Paley snapped the pianists for Verbier). A high note from which to take my leave of the Verbier music. 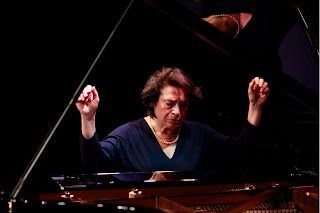 It was her fault, and Pires's at the Wednesday late night Prom, and Kit Armstrong's, if I hadn't been able to settle to the stiffer presence of Yevgeny Kissin. His Chopin Nocturnes, by comparison, went for nothing, though he finds more in the spring of the Mazurkas. But still it wasn't relaxed in any way. I fled at the interval, probably rather foolishly missing what was by all accounts much more engaging Schumann. 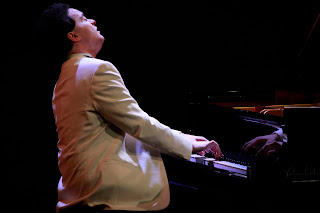 Not much to say about Ilya Gringolts and Masaaki Suzuki in Bach sonatas, unhelpfully swathed in the darkness and disco lights of the horrible church interior. But again, perfect, sprightly and unfussy music-making for a morning in the mountains. 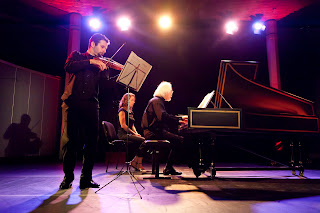 Sounds from Jessica Duchen's blog like I should have plumped for the last weekend and the Gergiev/Voigt Strauss Salome, of which I'd been wary (sure enough, the wayward maestro didn't show up in town until rather late in the day, but according to Jessica that didn't inhibit the thunderstruck results). But then I wouldn't have heard so much Leonskaja, the essence of the experience, and in any case we can all see the concert opera for ourselves on medici.tv's Verbier selection for free. One last fond look down, then, on Verbier from another point of Alpine superiority. 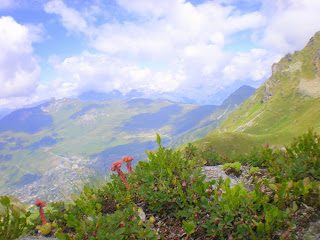 How delightful to hear even more from Verbier (and many thanks for the link, David - definitely one to be followed).
First heard/of Kavakos about 3 years ago, & he even managed to thrill these cloth-ears! Lucky you. Am rather a fan of Dutoit & his sensitive handling of soloists. Must go and investigate further with all of this - thanks again, for further enriching musical treats.

Yes, Dutoit knows what to do, though I didn't feel he or anyone really told the story or treated the characters operatically.

Rather proud of that bee-and-flower photo. Typically I hadn't even noted our apine friend when I took it.

Kavakos plays that Ysaye stunningly. No wonder the youngsters were riveted.

Love the flower and bee photo too.

PS Thank you for illuminating review on TAD of Tues. 3 Aug. Prom, D: my listening enriched as a result.

Oh good. Hope you were moved by my Favourite Slow Movement of All Time (Adagio of Elgar 1).

Just come back from late nighter - Stravinsky's Threni, absolutely fascinating, austere but unforgettable. My first time live. Taking a bit of time out from TAD, so not obliged to write it up, but lots to say.

Saving my live Mahler 3 of the year for Jurowski at the start of the new season, but sure Runnicles did a good job on that too.

pity you missed voice classes with Brendel and Tim Carrol and the stunning performance of La Bohème. Mine was a different Verbier with heaps of chamber music like Ebène Quartet, Joshua Bell, Henning Kraggerud,F.Helmerson, N. Angelich.
Only one disappointment: Kremerata Baltica playing only transcriptions
like Beethoven op. 131,unforgivable
See you next year ? Irene

Hope so, Irene. We all have different Verbiers depending on when we went and what we could see, and Jessica Duchen has filled me in about the Boheme (and written about it on her Standpoint blog).Makes me envious, but you can't do everything.