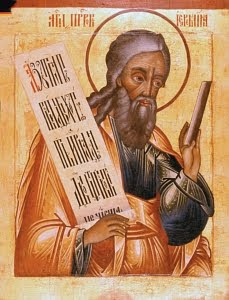 In between the Proms' Mahler marathons - both of which I gave a miss, as you can only really hear the Third, Fourth and Fifth Symphonies live once a year, and I like to think I'm choosing carefully - came a late night special of great significance. One of Stravinsky's most ambitious endgames, the serial Threni setting some of the lamentations of the prophet Jeremiah (in Latin) had never been performed at the Proms before, and neither I nor my illustrious one-time unofficial animateur Dr Roger Savage had ever heard the word made flesh, as it were.

It was time to do them justice, too. Stravinsky biographer Stephen Walsh gives a lively if not topographically entirely correct account of the 1958 premiere in Venice's fabulous Scuola Grande di San Rocco, the Tintoretto masterwork which I first had almost to myself on a bracing cold January day some years ago. The 76-year-old Stravinsky conducted the first performance, by all accounts not very well, beneath the moving-to-tears Crucifixion in the upper Sala dell'Albergo.

Writes Walsh: 'An audience of five or six hundred - mainly press, the international set, local grandees, and a handful of first-nighters able and willing to pay twenty dollars for a seat - crammed into the long rectagular salon, deadening the acoustics, and exposing still more the spareness and severity of Stravinsky's Jeremiad'.

Well, the acoustics of the Albert Hall certainly aren't deadening, and my stylish colleague Igor Toronyi-Lalic probably has a point in his Arts Desk review when he writes that 'one should feel as if one is choking on the relentless suffering. In the Royal Albert Hall such feelings couldn't reach us...The many close-knit serial canons needed to feel like boa constrictors winding themselves around your chest inexorably, squeezing the life out of your lungs.' 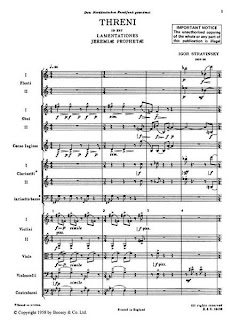 Superb prose, that, but Igor may have been sitting further back than I was. From my coign of vantage, it wasn't suffocating but it did have a spellbinding impact. And when John Tomlinson opened his mouth, you heard serial lines as great lyrical phrase-making. Years of playing Musorgsky's Boris had not been wasted, as Roger pointed out, though it does amaze me that the leading Wotan of the late 1980s and early 1990s is ready to humble himself and join the line. What a great patriarch artist he still is. Chris Christodoulou wasn't snapping at the late night prom, but here's a recent shot by Robert Workman. Just a little in common with the Kizhi ikon of Jeremiah up top? 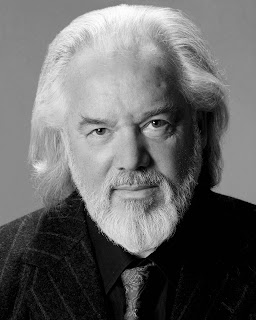 Threni proceeds to give just a glimmer of grace. As Igor puts it, the 'low persistent industrial plant-like rumble of the four male voices' - admirable baritone-turned tenor Alan Oke on top - yields to 'light at the end of the Threni tunnel...of a distinctly weak, bled sort'. So moving, the bare unison woodwind and the discreet choral contribution. David Atherton, conducting 'his' London Sinfonietta and BBC Singers, couldn't have made a better case for this, nor for the airy games of Stravinsky's choral(e) variations on Bach's 'Von himmel hoch'. They sounded dangerously like the frilly Lully arrangement of Strauss's Bourgeois Gentilhomme courante, composed over 40 years earlier, though I doubt if Strauss would have given just the odd puzzling note or line to his players. I warmed to it more than to Daniel Hyde's delivery of the original Canonic Variations on the Albert Hall organ, which didn't quite flow and seemed to embrace the longest rallentando I've ever heard in the fourth variation.

Still, these late-night proms, as I've said before, really do have a special atmosphere, whether the hall is full (Pires in Chopin Nocturnes) or half-empty (the Scottish Chamber Orchestra's wind serenades). If you go to the previous concert, as I remember doing with Andris Nelsons and the CBSO's Firebird before JEG's Bach Motets, you really do feel as if you're at the best music festival in the world.
Posted by David at 11:07

Thank you for this excellent post. Arrived here straight from Igor's review, complete with masterly phrasework ('the asphyxiation of despair': superlative! Might pinch it ... ;-)!), so delighted to find more + background enlightenment.
Can't tell you how this is helping my musical education (mind you, the bar's set rather low = on a par with Molesworth & the Skool piano).
JT would make a terrific icon tout court: what a face!
Bon weekend.

Oh good. I'm curious to know how it would have worked listened to 'cold' on the radio - it's very tough and austere, though I wouldn't say dry.

I've had problems for years with Stravinsky's late serial or semiserial pieces, only got to love some of them - Abraham and Isaac, Three Stravinsky Songs - when I was writing my little book on IS. Threni wasn't among them then, but I hadn't heard a really good performance like this.

Perhaps we can now dub John Tom 'the wizard of Ostwaldwhistle', which is where he comes from, no kidding. It's been a great year for him: his General in Prokofiev's Gambler was just superlative. You always hear every word. And then I think there was something else, can't remember what. And to think last year we wickedly thought he was a bit clapped out.

It IS tough and austere (just the right words); but it has a kind of tragic dignity, which somehow softens (not the right word!) it. Had never heard of 'Threni'; sometimes made me think of the much earlier 'Symphony of Psalms' (which I haven't heard for ages; used to love it).
JT as Wizard of Oswaldwhistle ... love it! Had a vile colleague once who came from there; so v glad to hear the place has produced much more laudable human beings: makes all the difference! It is so gratifying, also, to be proved wrong in such a way: 'form' is so unpredictable.