Sisters of the Villa Wesendonck 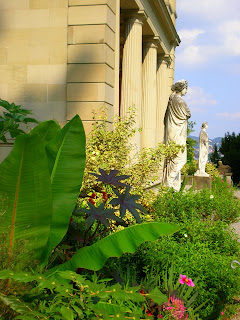 It's not so much the building, constructed in 1857 by Leonhard Zeugheer along the exact lines of the Villa Albani in Rome for Otto and Mathilde Wesendonck, as the so-called Rietpark of the Villa Wesendonck in Zurich's Enge district which I love so much. The Wagner connection, of course, is inescapable - he worked on Tristan in a now-defunct building on the other side of the cobbled street which leads up and over the hill, down to the Zurichsee on one side and the residential district where Lottie and our goddaughters now reside on the other.

But I've written about that before, and all I need to reiterate here is that the park has proved the perfect summer retreat over two years for reading, writing, napping or just enjoying the excellent produce of the Rietberg Ethnographical Museum's cafe at various tables dotted around under the old trees. 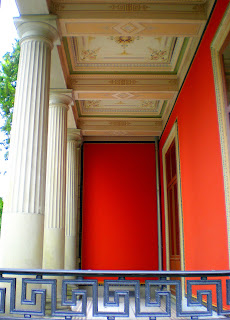 The neoclassical fancies and Pompeiian reds have been freshened up a bit in the latest stage of restoration. But I'm still not sure what to make of the building. It's one of many luxury villas dotted around Enge, and their greenery can accompany you all the way down the hill to the lake if you walk through the Rietpark 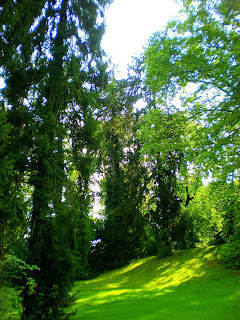 and across the road to the grounds of the Villa Belvedere. Then you can manage it so that you reach the Sukkulentenhaus by the lake, another of my favourite Zurich sites with its phenomenal collection of cacti and its Madagasque centrepiece. 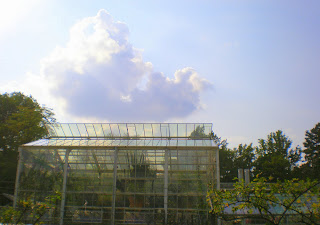 At the Belvedere, it's not so much the main building as the double-villas flanking the main entrance which prove of interest. Seestrasse 127/9 was constructed in 1895 by Hermann Stadler and Emil Usteri in the new-baroque style 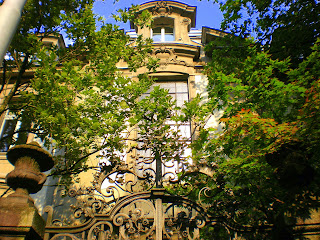 and is remarkable chiefly for its ironwork. 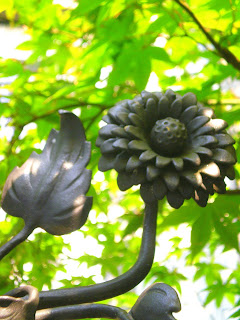 Quite different is the huge block down the other side of the Rietberg, Zum Wolfsberg, built by Jakob Habler and Carl Schindler in 1910 as a living-space with workshops for the owner, lithographer Johann Edwin Wolfensberger. In 1911 he opened an art gallery here which was to display for the first time many works by Dix and Beckmann. The Jugendstil ornamentations to the rather severe facade are by Wilhelm Schwerzmann. 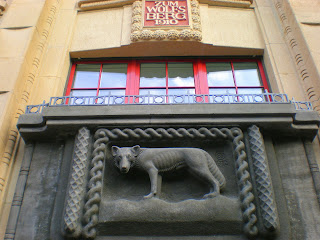 Clearly the wolves are a play on the proprietor's name, but what to make of the vulpine-headed nudes which adorn the main doorway? 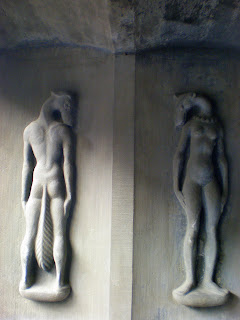 Round the corner, the wolf-theme vanishes and the designs between windows vary from bees 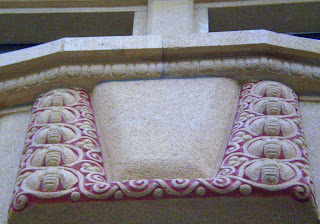 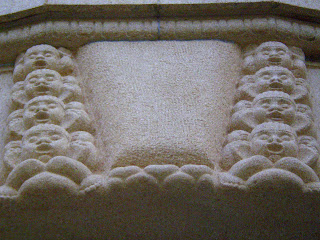 So much for uniformity in Zurich. It doesn't yield up all its secrets on a first visit, but the artistic hotchpotch continues to fascinate.
Posted by David at 08:10

'Artistic hotchpotch' it certainly is - and what a fascinating glimpse: thank you. I'd never have imagined Zurich to be so very interesting.
Bit Eric Gill, the wolf & wolfheads - esp the latter. Although there's something in the Teutonic psyche about wolves ... connected with forests, mountains ...? Anselm Kiefer illustrates the notion so well (albeit without fauna); Mahler has the sinister, febrile aspects covered in his song-cycles - and I bet you could tell us much more.
Those are definitely putti to mine eye, decidedly cheeky and a tad Jacobean.
Now I want to go there, see it all for myself and revel in that lush greenery! Gorgeous.