Made a spontaneous decision to go and see Shadwell Opera's production of Britten's A Midsummer Night's Dream at Rosslyn Chapel on our first night in Scotland. Not quite what I expected, but still the students put their hearts into it: review over on The Arts Desk. Was upbraided for not choosing the mainstream festival option of The Sixteen and distinguished soloists in Purcell at the Usher Hall; yet I thought the humbler enterprise merited our support, especially as nice Elly Brindle from the Cambridge group had written and they seemed so well organised. I didn't regret it.

Above all we had a chance to see this singular and mysterious creation without having to share it with hordes of Dan Brown admirers (apparently the grail trail of The Da Vinci Code leads here, though the author never came and readers might be disappointed not to find the odd detail in situ). The place is shrouded in mystery and legend; yet its origins are quite concrete: no saint's sanctuary but the only executed part - a choir and retro (Lady) chapel - of a Catholic family church built by William Sinclair, First Earl of Caithness, from 1456 (Rome granted the charter ten years earlier). 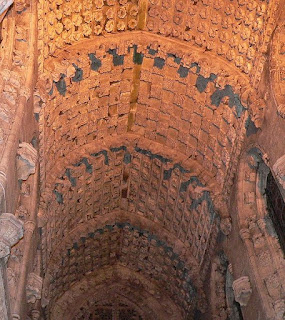 The detailed carving, which supposedly took over 40 years to complete, is breathtaking and outlandish. I have one big question, though: do we know how much was added in the major Victorian restoration? Would that account for maize appearing on an arch some decades before Columbus reached America? Not to mention the proto-Masonic symbols such as the roped fallen angel (all photographs here courtesy of Wikimedia, as you're not allowed to snap inside, and though I could easily have done so after the show, I honoured that injunction). 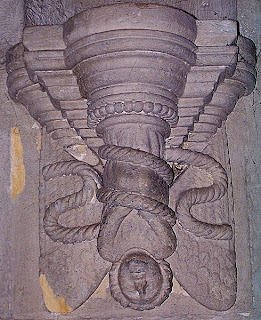 At any rate much of the carving is like nothing I've seen from that period, and of course what looked from where we were sitting like an ambulatory, where the orchestra was placed behind the small stage platform, provided the stone forest necessary for the Dream. There are 100 green men, carved in various stages of their life-development including this rather alarming wee chappie: 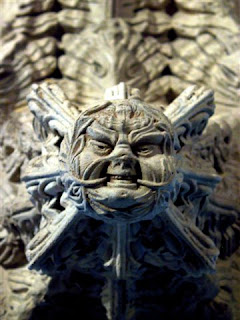 and a bizarre sequence of 213 patterned cubes projecting from arches in the retro-chapel (you can see some of them at the top of the Apprentice Arch in the picture reproduced below). Their geometric designs have recently - if inconclusively - been interpreted as a musical score. Wiki tells me that they 'resemble geometric patterns seen in the study of cymatics. The patterns are formed by placing powder upon a flat surface and vibrating the surface at different frequencies. By matching these Chladni patterns with musical notes corresponding to the same frequencies, the father-and-son team of Thomas and Stuart Mitchell produced a tune which Stuart calls the Rosslyn Motet.' Must hear that - there's a download available, though at a cost.

The jewel, though, is the so-called Apprentice Column, which 18th century legend has it was created by said apprentice in master's absence, whereupon on his return master struck apprentice dead in horror at his superior work. Si non e vero... 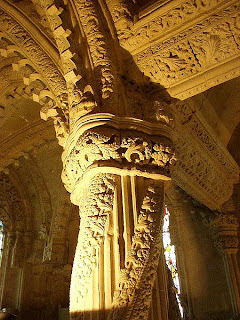 All the grail and secrecy stuff seems to have been a later accumulation, though I'm fascinated by the idea of a sealed vault which is supposed to be as high-ceilinged as the chapel itself. Waiting for our lift to Broughton after the show, J spoke to the night watchman, who comes on the bus every evening from Hawick. He'd heard strange whisperings in his ear, and a stone was thrown one night. Wanted to make our flesh creep or quite sincere? Well, I didn't find it spooky. But it was wondrous strange.
Posted by David at 09:09

Yes, I read your review in TAD, David; also think you made the right choice. HC's singers are glorious; but an all-Purcell programme sounds, er, too much of a good thing!
Thank you so much for these fascinating views of and on the Chapel. I'd read about it, via Baigent/Lincoln/Greene, and note that Andrew Sinclair has also jumped on the ... erm, lent academic weight to the history: www.andrewsinclairtemplar.com.
But the carving's all a bit too florid for me, Gothic art becoming decadent as it moves towards its end (not counting the revival, which was really, truly ... horrible, and is no doubt responsible as you suggest for some of the worst excesses here).

I love to encounter eccentric architecture. In Lyon, the mid-19th century Notre Dame basilica high on the bluff overlooking the Rhone is covered in highly stylized sculptures, largely made up of geometric shapes, that look like the birth of Deco decades before the actual event.

When you speculated on some possible invention during the 19th century renovation, I thought of a marvelously contemptuous comment made by a specialist in antique silver on an episide of Antiques Roadshow. Shown an extensive set of stirling flatware, he said, "what you have here began as a pure and graceful early Georgian design that was TARTED UP by the Victorians."

Ever after, I've deployed "tarted up" where appropriate and have delighted everyone with it because Americans don't know this expression.

Personally, Will, I'm not inclined to be as severe as Minnie about the Gothic revival - surely the Houses of Parliament are just glorious? I simply surmised that some of the wackier inventions might have dated from then, but have found no evidence to back this up.

Felt a bit the same at Kilpeck Church, tucked away deep in rural Herefordshire. I found it hard to believe that the sandstone corbel table would have stood the test of time, and again speculate that the restoration might have added at least a few delightful animal specimens.

I do agree, though, Minnie, about the mid-15th century decadence. I find it fascinating, but not as enigmatic as earlier Gothic detail.

The Houses of Parliament are indeed glorius - outside. Inside, the architecture shows all that heaviness, that tedious invention, that lack of proportion, which demonstrates the decay of taste which corrupted culture as the nineteenth century evolved. Thanks goodness for Picasso and the others who blew the whistle on that sort of thing

Here we go again! Kilpeck Church is one of my favourite buildings - and a place of regular pilgrimage when I lived in the region. Tending to speculate furiously about Olivier de Merlimond & what he discovered following of El Camino. Yes, feel restoration probably was fairly thorough - altho' nothing like as ruinous as at St Alban's.
Have tried to love Victorian Gothic, honest; but failed miserably, oh woe! In mitigation, quite like earlier GRevival (although that probably doesn't 'count'!).