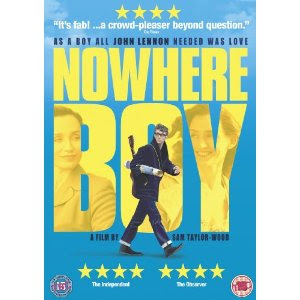 Somewhere high in the top ten of recent, possibly even-all time British films is where I'd admiringly place Sam Taylor-Wood's directorial debut. Nowhere Boy is about so much more than just the man born to be a Beatle. John Lennon's growing-up story is an extraordinary one: raised by his Aunt Mimi, reclaimed all too belatedly by the vivacious - manic-depressive? - mother who gave him up when he was five years old, only to lose her again. The film suggests how his creativity might have been both fostered and blighted by this emotional roller-coaster.

The cinematography is ravishing, as you'd expect from STW's art: no dreary 50s Liverpool and Blackpool this, but a colourful world full of possibilities. In that respect it has much in common with Richard Jones's vivacious view of northern rep in his brilliant ENO Pagliacci. What truly stunned me, though, was the capturing of three great performances that give the film its beating heart.

However good the scenes of pre-Beatledom music-making, it's the love triangle between the two sisters and their joint son that rises to the heights in a visceral confrontation. I challenge you to sit through that dry-eyed. Highest praise for Anne-Marie Duff as the very loveable Julia Lennon is that she's not eclipsed by the nuanced delivery of the ever-surprising Kristin Scott Thomas as the controlled but by no means cold Mimi. And Aaron Johnson - how uncannily he veers between cocky, sexy teenager and a lost boy who needs a good cry. And, yes, he's beautiful.

Still odd to find a sharp intake of breath about the fact that STW set up life and parenthood with Johnson in the wake of the film. Ingmar Bergman did it all the time with women at about the same age distance, and no-one bats an eyelid. And what Bergman wrote about the erotic charge of film or theatre is obviously true. It's partly what gives this film its special quality, and I don't think I'm saying that with hindsight. Goldfrapp score sometimes sentimentally apart, it just doesn't put a foot wrong. Oh, and it has something of the energy you find in Anthony Minghella's The Talented Mr Ripley. Which Taylor-Wood would certainly take as a compliment, since Minghella encouraged her to make her first full-length film. How proud he would have been.

Thanks, too, for introducing me to so much music. Love Duff's ukulele playing, a very touching scene, and the way she discreetly bounces to Screamin' Jay Hawkins's 'I put a spell on you'. Found an outrageous film on YouTube of Hawkins parodying his already parodistic self, so let's stick to the 1956 single.

And hear how mighty Nina appropriated it to her own very different ends.

Lovely post, as ever - makes me long to see the film. It sounds wonderful, and I do so hope it doesn't become a succès de scandale due to the director's relationship with the leading man (beautiful? God, yes!).
Fascinated by the addition of colour to the '50s, so often viewed in/as black-and-white; good to see a bit more balance injected to do 'em more justice.
Interesting point about the erotic charge of film/theatre: definitely present (often very discreetly).
Kristin Scott Thomas is enormously talented, with a tremendous range. Always given an ice-maiden tag by Britjournos, I saw her interviewed on French telly and she presented as relaxed, funny and very warm; above all, extremely articulate - eloquent even. What a difference a change of country/language can make ...!

I adore her and, much as the subject matter seems run of the mill, can't wait to see her latest French effort.

Mind you, I know she does have quite an entourage when she travels. Miss Scott Thomas's stylist is very much part of the package. But then she is a big star. I reckon AMD should be too, so touching.

Entourage, eh? Aha! She's just gone right down in my estimation. Jane Birkin does just fine without, after all. Still, as you say, a star - so I suppose it must be allowed.
Gosh, yes - AMD is extremely versatile. MUST see this film, D! Many thanks for the introduction and inviting overview.