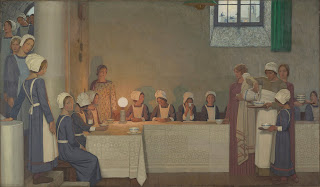 They were never really in danger, and following the demolition of the Middlesex Hospital in 2008 the four paintings known collectively as Acts of Mercy that had hung in two different entrance halls, starting in 1915-20, were acquired by the Wellcome Library. Now they're being splendidly exhibited in the National Gallery's Sunley Room until October.

Never heard of the artist, Frederick Cayley Robinson? Neither had I, and I thought I'd be in and out of the room in a flash. But I was caught immediately by the geometrical, frieze-like compositions and the magic realism of the streets and windows. Cayley Robinson studied in Tuscany between 1898 and 1900, so he probably knew the tradition of paintings for charitable institutions from Domenico di Bartolo's fresco of orphans received into Siena's Hospital of Santa Maria della Scala. He would certainly have been familiar with the kind of storytelling perspectives offered in this rather marvellous painting by Sandro Botticelli of scenes from the life of Saint Zenobius. It hangs in the National Gallery, though I'd never noticed it there, and is reproduced by courtesy of that institution.

Cayley Robinson's series derives from the seven Corporal Acts of Mercy, six of which are very poetically described in Matthew's Gospel. The first two paintings depict the Middlesex Hospital's tradition of raising orphans. There are mysteries in 'Orphans' I (depicted at the top). Why the girl in the patterned dress illuminated by lamplight? And the birds flying from the campanile outside the high window - could they have something to do with Cayley Robinson's designs for Maeterlinck's The Blue Bird (which I'd love to see)? All four Middlesex Hospital/Wellcome Library paintings reproduced by courtesy and with the copyright of the Trustees of the Wellcome Trust Ltd.

In the painting which always hung to the right, and does so now, the girls - in orphans' uniform, though they could almost be nurses in training - continue to process. The almost mystical gap below the window with the bust suggests a kind of imprisonment - is Cayley Robinson criticising the straitjacketing of these young women? 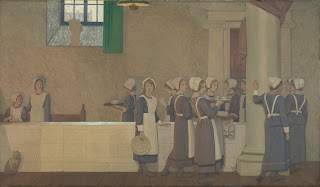 The sombre fallout of the Great War enters the picture with the last pair, collectively known as 'The Doctor'. In the first, actually painted last in 1920, there are nurses, physically and mentally wounded soldiers, enigmatic onlookers and weirdly lit streets with factory chimneys behind. 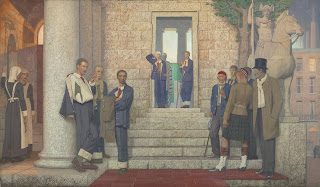 The last is almost post-PreRaphaelitey, too much so for me, with the costumed mix of periods, but I like the tree breaking up the ashlar, the birds and the semi-lit houses. 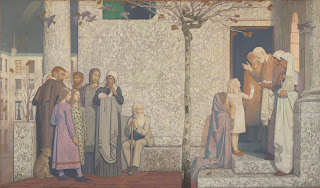 Not only is this a fascinating little exhibition, also featuring's Piero della Francesca's hauntingly cool Baptism of Christ and a few more Cayley Robinsons, one alongside a Puvis de Chavannes; it's also the one place in the height of summer where you can escape the gaping parties in the main galleries - usually so empty at certain times of day. By the way, it looks as if reintroducing entrance fees for museums and galleries is NOT on the cards of the new government. But maybe one good solution for swelling the coffers would be to incorporate a £10 culture charge in tourists' air tickets.

Anyway, it's marvellous as a Londoner to be able to drop in on any treasure for half an hour or so. And this encourages me to visit the Wellcome collections and the Foundling Hospital (which I think does charge for admission, but I'm happy to pay) some time soon.
Posted by David at 11:14

Oh, I am so glad that the FCR paintings were saved and re-housed! Although I last saw them in the '80s, I remember them well (family connections with the Middlesex Hospital).
I suspect the new context will mean they're looked at with a more critical eye - no bad thing, and I see what you mean about the effects of too slavish an adherence to PRB aesthetics (another family connection was a member of that particular band of bros; as a rubbish artist, he wisely settled for curatorship & became first director of the V&A!).

Lovely post David. Let me support your case with :

Ah, Piero sublimo, as Lucia might say, so thanks, Sebastian. Of course the size of that reproduction does it something closer to justice than my tiny images of what are, of course, very impressive canvases in the flesh. But all the more reason for readers to go and see for themselves.

And my PRB carp is a very small one, Minnie, in relation to my admiration. Trust you to know these already.

The Foundling Museum does charge.but it's not excessive. If you come on a Wednesday,look out for a friendly room steward...

Thank you for writing about the Cayley Robinson paintings. After getting my dose of Titian and Bellini, it took a while for my eyes and sensibility to tune into the soft, delicate pallet used in these paintings. The thing that struck me about them was his narrative structure. Using long rectangular canvaes gave him the chance to put a matron or some sort of managerial figure at one corner, acting as a narrative bookend, resulting in a fascinating viewing experience.

In spite of years of trying, with books having been bought and trips to see his paintings made, Piero della Francesca just doesn't do it for me - although that's not to say that his formal structure isn't magnificent. These Cayley Robinson's drew my eye much more than the Baptism of Christ.

A splendid exhibition, and thank you for writing about it.

One of the joys of blogging is finding others who uncover previously ignored/forgotten/hidden delights - so thank you again. Must check out the pictures in larger format thanks to TLJS.
Ah, wouldn't dream of dissing the PRB - only my rellies ...!

Well, Piero does it for me, in a Stravinskyan restrained-emotion kind of way, Colin. And I haven't seen the Resurrection in Sansepolcro in the flesh, so to speak, though Arezzo is worth a visit.

Minnie - you get the processionals much bigger simply by clicking on the images. I'D diss the PRB, but not the early Millais. It's a long way from Christ in the House of His Parents to the Scapegoat...

PS FCR's draughtsmanship does it for me: lovely, crisp, confident lines w wash of colour (+ a canteen cat). More picture-book illustration than PRB, IMHO. OK will shut up now!

Well... your site is as surprising and educational as ever! I had dimly heard of FCR (poss. through the Antiques Roadshow?) but these look great -- must try to get to the exhibition.

I adore Piero -- got to him via Martinu, of course! Very lucky to have seen the Frescoes in Arezzo neither restricted nor being restored (some years ago now). And I have indeed seen the Resurrection in Borgo San Sepolcro. Can't pin down what it is about his work, but it has a very special atmosphere about it -- like Martinu in fact...

I would suggest Raphaelite not PreRaphaelite

PS Did you know that in the painting of The Scapegoat several goats died?