It's up on YouTube, and the BBC put it there: the comic highlight of last week's Sondheim Prom. To get the gag, and the headline, you'll have to hang around for the last of the four or so minutes, when the most famous living Welshman other than Tom Jones sashays along with the rest and even does a little skip (especially nice choreography there). The others are Simon Russell Beale, Daniel Evans and the delicious Julian Ovenden. Best go full-width by clicking on the screen once you've set it going and flipping over to the site.

I put this and the following at the bottom of the Arts Desk review, but since I only discovered them yesterday, and many Proms have passed under the bridge since the piece went up, they might have gone unnoticed, so here's an extra shrine for them.

Seeing Dame Judi in close-up highlights what an unflashy star she is, already preparing to launch straight into heartbreak from the minute she steps on to the platform to receive the roars of the crowd (for some reason the entry seems to have been shorn since I last looked). And I repeat what I think we discussed earlier: not having much of a singing voice doesn't matter if you have the right sense of musical timing. Have you ever heard 'the one that I wanted' done with greater yearning? Takes me back to her treasured Sally Bowles in Cabaret - a performance I'm too young to have seen on stage, but delighted to have it captured for posterity on the original London cast recording. Here she is back in 1968. 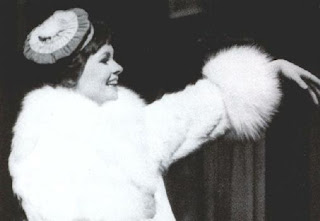 It's certainly a bit irritating to be told that she and our Stately Homos Fry and Beale are National Treasures, and to hear how the home counties roar at anything they do, but there's a good reason for it.
Posted by David at 09:29

Gorgeous Bryn and Judi (what a great actress she is)! My parents saw her Sally Bowles & raved about it.
Terfel fawr in a telly docu.; facing his dressing room mirror The Great Man opined: "Look at that face - duw! A dead ringer for Meatloaf, isn't it?"!
I think you're right: in certain contexts, phrasing and delivery can make up for lack of singing voice (but I would say that: have voice like a corncrake).
As for national treasure status, see what you mean about irritating; on other hand it's very heartening to see popular national taste being properly discriminating. See: they can do it ...!

Send in the Clowns was written for Glynis Johns who had musical training but was hardly a great voice and was 50 when she sang it in the original production. Sondheim wrote it especially for what she could do at that time in her career and, in the process, gave a great gift to many actresses whose intelligence and musicality are miles ahead of their vocal cords.

I am always interested in your remarks about music and various recordings, as well as your indefatigable travelling, but why will you be protesting against the visit of Pope Benedict to England and Scotland next month? Have you actually read any of his articles and encyclicals, or are you going on the, usually distorted, accounts in newspapers such as the Guardian, which is completely hostile to the Catholic Church anyway. I think you will find that if you actually read any of the Pope's documents you will find his views much more nuanced and qualified than you may suppose. This is equally true of the previous Pope, who wrote some excellent books during his long tenure. I think his best was THE THEOLOGY OF THE BODY, which is a complex but most rewarding text, and very subtley argued. Give the Holy See some fair treatment, MrNice!

Philip, I'm going on three episodes which have cast the Pope in a very poor light indeed, regardless of his learning and his arguments which have very little to do with the question of humanity in my opinion.

The first horror was when Cardinal Bertone equated homosexuality with pedophilia. and nobody rushed to refute this or apologise.

The second was the Pope's singular lack of wisdom in rejecting firmly enough - and quickly enough - those elements around Europe who had caused such a scandal in the child abuse unveilings. The Catholic Church in the UK has done exactly what the Vatican should have done - expressed its regret in no uncertain terms. The Pope's expression came later, but too late.

The third was the bizarre equation of the ordaining of women priests with the 'gravest sins', including pedophilia.

Sorry, but whatever the subtleties of his arguments - which I freely confess I have neither the time nor the inclination to read - we can't live side by side in a world which moves and turns. As far as I'm concerned, lack of compassion and understanding for human beings who are trying to lead good lives as best they can encourage persecution, one of the biggest evils in our troubled world.

There is a fundamental fault - almost of logic - in the implementation of the great religions founded at a time so long ago. The marvellous natures of the revelations was, and still are, confused with the social norms which existed at that distant time. Thus the immutability of the theological revelations is transfered to an immutability of the social norms - "All were the same to Calvin" as Professor Elton recorded in a similar context.

As a result changes in social viewpoints cannot be accomodated, notable examples being the position of women, and gay relationships. In primitive societies it was necessary to be anti-contraception and anti-gay since the tribe needed to build up its population against the threats from enemy tribes. Now too many people is itself a threat to the world.

This incorporation of the social norms of the past has caused and still causes tremendous misery. In addition it weakens the fundamental messages of the revalations themselves, which are clouded and often obscured by the parallel imposition of these outdated norms . And this is a loss since, as Jung pointed out, the [Christian] religion, even if it may not be true, remains psycologically valid

Kurt said ---
- absolutely agree with you about Judy D . I heard her sing it at the National Theatre and it broke my heart then- and ,as you know I am old enough to have seen her in Cabaret at the Palace Theatre -- in the dark ages .
[The song which was written as a'filler' was wasted on Glynis Johns as I remember]

Well, Kurt - no Glynis, no "Send in the clowns", as Will suggests. It was added at the last minute and composed, what, in day or two? I think SS declares that Dame Judi "owns" the song because her delivery is uncannily like GJ's, though no imitation, Though I admit I prefer Dench. There's a performance by Julie Andrews on YouTube which is wonderful, too. Before these three I couldn't bear the song. Now, like you, I find it breaks my heart.

Blasphemy I know, but I've never much cared for Dench in Send in the Clowns. She's tragic, not wry, which is all wrong; the woman's been knocked back, she hasn't had a terminal diagnosis.

The prom was wonderful, though. I was in the RAH and was in tears pretty much throughout. Am up in Edinburgh now doing a show with Emma Odell, who sang so beautifully in 'Our Time'

Well, Jon, maybe the ideal would be one eye wet, the other dry, a la Marschallin, but I've seen Schwanewilms do tragic in Act One of Rosenkavalier and for once I was convinced - yes, Octavian and Egermann aren't worth slitting wrists over, but maybe they symbolise some bigger failure? Just possibly. And Glynis was tragic.

What show are you in? I could come and see it...though that Sondheim song makes my toes curl, so I'm afraid I didn't notice your co-star...

Uncurl your toes at once, Mr Nice. 'Our Time' is DEVASTATING in context. All that starry-eyed youthful monomania and optimism coming after (and before...) we've seen what cynical bloated creatures the protagonists have become. It is, I think, one of Sondheim's greatest moments of dramatic irony.

But that's the point about the Prom, Jon - there WAS no context. Ditto for 'Agony', which fell flat even for those of us who knew its place in the piece - seeing it at Regent's Park restored faith.

Well, you didn't let me know what your show was - and now I'm heading back south. Very happy to have seen a real winner - Ovid's Metamorphoses from Pants on Fire, one of the best slices of Total Theatre I've ever come across.

Oh no! I was so busy defending 'Our Time' that I forgot to plug... Anyway, I'm not sure you'd have loved the show I'm doing. The music is - *thinks* - unsophisticated.