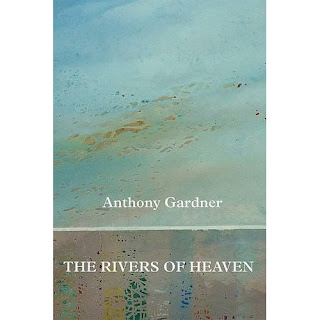 Past the solstice, that 'hinge of the year' according to the divine Angela Carter 'when things do not fit together as well as they should', we hover in the twilight zone on the threshold of the New Year. It's a time for spinning fantasies and ghost stories, and by strange paths of picking up whatever book took my fancy - a luxury of this time - I've arrived at Rilke via Joseph Brodsky and Marina Tsvetayeva's 'Novogodnee', her New Year's Eve address to the then recently-deceased Rainer Maria. The enigmatic narratives of Chopin's mazurkas and nocturnes have been haunting me, too, now that I've heard them for the first time as complete sequences, courtesy of Ronald Smith and Garrick Ohlsson.

I've also finally taken the plunge, with some trepidation, into our good friend Anthony Gardner's first published novel, The Rivers of Heaven (jacket appropriately adorned with one of Luke Elwes's paintings), and emerged with magical pictures in my head. With the proviso that I don't have to write about anything here if I have doubts best left unexpressed, I can say wholeheartedly that it's an amazing piece of work. Dangerous and difficult indeed to try and define the journey of a newborn soul, not quite detached from the heavenly rivers; but Gardner pulls it off. There's a passage of poetic prose where the rivers are defined; and the interwoven stories of human interaction, deceit, false hopes and wrong paths taken work well, too. It's always amazing to find traits of a person one simply didn't know, and I blush to say that I recognise very little of the daylight Anthony we normally get to see in this. Awed respect to Mr. Gardner.

I keep coming back to the stories of Carter's Bloody Chamber, gleaning even greater pleasure from reading them aloud to J. I thought the 25th was germane to 'The Company of Wolves': 'Midnight; and the clock strikes. It is Christmas Day, the werewolves' birthday, the door of the solstice stands wide open; let them all sink through'. 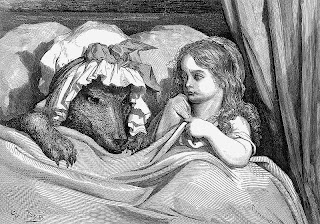 Carter's Red Riding Hood, unlike Perrault's and Dore's, shows little fear of her vulpine adversary. I say no more; read it for yourselves. After the elegant vampire and werewolf stories, we're now back at 'The Courtship of Mr Lyon', and I have to say Carter makes a more concentrated job of Belle et la Bete than the fitfully poetic Cocteau film, which we watched between various Birdcages and - crying with laughter and tense with embarrassment - Bruno.

Finally, Entartete Musik brought my favourite film of all time, Fanny and Alexander, back into the foreground of memory. It's too soon to watch the whole thing again, but I was moved and delighted to find Uncle Isak's parable of the desert road on YouTube - a haunting liminal tale narrated by the wondrous Erland Josephson.

From the sublime to the self-indulgent: this is also the time for making lists. I've so far resisted any here, but the Arts Desk asked for our musical highs and lows of the 21st century's first decade. Having had no trouble providing two sets of top 10s, I started the lows and then thought, with a little prompting from the resident good angel, hell, no, why trash a sphere which has a hard enough time winning its place in the sun? And I'm not as funny as Igor in lambasting the bad. So I stuck to the positive and simply lamented several medias' attitude to 'classical music'.
Posted by David at 10:59

Vladimir Jurowski has had great success at the Metropolitan Opera and is highly respected by audience and critics alike. Now that Valery Gergiev plays a more limited role at the Metropolitan than under the Volpe regime, I'm hoping that Jurowski will be able champion the Slavic repertory which is now fading after a decade of Gergiev's advocacy.

The fundamental difference between VG and VJ for me has been that Gergiev can be inspired, but often doesn't have time to prepare properly; Jurowski works incredibly hard at everything he does - you want to hear the way he textures Berg especially - and has both the phrasing and the discipline. He doesn't always manage the Gergiev alchemy, but when he does, it's also wonderful.

This is well off topic, and possibly would have been better served in your Christmas thread, but hope you and your readers can join me, as I did personally earlier this morning, in wishing the very best to another David, Sir David Willcocks, on the occasion of his 90th birthday! I first heard his work in the late 60's, and began acquiring some of his King's recordings, notably those of Handel, in the 70's. He seemed well-atuned to Handelian performance practice as we understood it then, and I trust at least most of us know how well he had that famous choir sounding! I first met him in, I think, 1975, when he visited the University of Maryland to conduct Handel's _My_ _Heart_ _Is_ _Inditing_ and the Faure _Requiem_, my first extensive exposure to the latter, and it was not too long before his recording of it found its way into my collection! My interest in later English music did not begin to develop in earnest until 1978, but, during my first visit to England in 1977, I sat in on a rehearsal of the Bach Choir during which they were preparing _Gerontius_ and _War Requiem_. I only knew a little about the former then, but remembered some of the things I had heard during that rehearsal when I began to know that work better about two years later. I now wish I could hear Sir David conduct it, but suppose the closest I will now get to that is the rather-famous Britten recording for which he prepared the choirs, played the organ, and which I have heard from time to time. He has been _MOST_ kkind to me since our first meeting, and I have enjoyed sitting in on several other rehearsals since those early ones in the 70's! Have you heard his fairly-recent recording, on the RVW Society's Albion Label, of that composer's _Folksongs_ _Of_ _The_ _Four_ _Seasons_ and a women's-chorus arrangement of _In_ _Windsor_ _Forest_, the latter drawn from his opera _Sir_ _John_ _In_ _Love_? The final movement of the latter is the chorus in the opera during which Fenton and Anne are borne in on a bed of flowers after having been secretly married, and it is music I have loved for years since first getting to know the Davies recording of the complete opera around 30 years ago. Yet this new performance has me thinking that I am hearing, and falling in love with, this music all over again, and, while _MAYBE_ I might have wished for just a little less vibrato from the Claire College women, I think this is some of the _MOST_-exquisite choral singing I _EVER_ expect to hear! I understand that Sir David is to return to King's some time early in the New Year to make a recording with its Choir of today, and I look forward to that with _MUCH_ eagerness! I hope he is somehow up to giving us more after that, and wish him _MANY_ more birthdays with us!

Briefly on another tack, I share your apparent liking for the Von Otter recording of Brahms' _Op._ _91_. And indeed the viola melody in its second song is an old carol, called "Josef Lieber, Josef Mine" in German.

Wishing you and your readers the best for 2010,

Well, I salute DW too, for all the carols he arranged in our seasonal bible (CfC 1, 2 and 3) during my church choir days. Not, I fear, for conducting a deadly performance of A Child of Our Time I once sat through - though that could partly have been the fault of the piece which, apart from the spirituals, doesn't improve with listening for me. Let's just call it a personal blind spot.

I would be at least curious to find out which 70 carols from those three books were selected for inclusion in the final volume, _100_ _CFC_. I particularly look forward to noon on Christmas Day each year, when, weather permitting, I open at least some of my windows and, not dependent on that, my flat door to play "Once In Royal David's City" and "O Come, All Ye Faithful," with the volume turned up a bit to share the festivity with any who can hear! Those festivities, including more carols, many of them arranged by our birthday man, two Bach cantatas and dinner, conclude, after a salute to our Armed Forces and a brief nod to the secular side of things, with his arrangement of "Hark! The Herald," another arrangement of his which I particularly like and play being "God Rest You Merry." I now have all of this music, the cantatas excluded, on a CD I especially put together for the occasion, thus no longer making it necessary to shuttle back and forth between CD's during the proceedings! I further have such compilations for New Year's and Easter.

On yet another tack, and though I have yet to collect it from our desk, my copy of _Annie_ has arrived!

p.s. I have also yet to warm to the non-spirituals portions of _A_ _Child_ _Of_ _Our_ _Time_, which I hope to play this coming Saturday for Tippett's birthday, though do not think myself averse to them either.