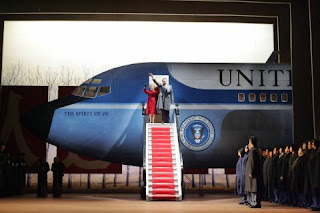 Referring not to the presidential plane which lands in Beijing near the start of Peter Sellars' durable staging of John Adams's resplendent Nixon in China - ENO production photo by Alistair Muir - but to nine-teen seventysix. Sing it, Louise, in the manner of the catchy refrains in Sondheim's Merrily We Roll Along.

In the booklet accompanying the 1976 release of DG's Kurt Weill box set, much-missed 'Phil' Langridge and the thankfully still very much with us 'Ben' Luxon sported flowery shirts and very of-the-time hairdos. 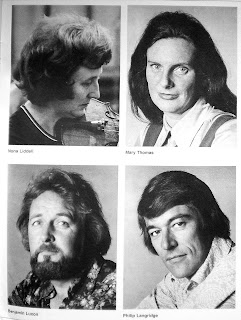 I was always amused by the fashions, shared above with Nona Lidell and Mary King, even at less of a remove in time, ever since I bought the treasurable set of Weill miscellanea (some of which has, alas, never made it to CD).

January 1976 was the month in which a Harburg/Arlen number from a 1939 Marx Brothers movie was remade, to achieve immortality in Episode 102 of The Muppet Show. We've been watching this over and over, and mindlessly humming the refrains, since I stumbled across this on YouTube. Pig Lydia made only one more outing, but apparently she was one of Jim Henson's favourites. Enjoy: we need a bit of lightening up after all these deaths and this endlessly prolonged winter. Do hang around for Miss Piggy's reaction.

thank you for that, I do not remember this number from the Muppets, so funny.

Is Mr. Luxon still singing after all these years? I look forward to hearing him again tomorrow in the EMI recording of RVW's _Riders_ _To_ _The_ _Sea_, for St. Patrick's Day of course. He has a unique sound.

As for last night, a spot-checking of the Melodiya once I got home suggests that Col. Colburn, as one would expect, had things well in hand, though the drum beats prior to the Funeral March are quicker on Rozhdestvensky. Yet the relatively-new trumpet concerto, based on the shofar calls for the Jewish New Year, had me thinking again about the discrepancy in interval between what I understand to be the usual fifth and the sixth employed by Elgar in _The_ _Apostles_. Yet the soloist, and one other trumpet player with whom I also spoke moments ago, indicated that different shofars may have had different intervals, so could Elgar have heard one somewhere playing at a sixth, or did someone, possibly Jaeger, tell him that, that is if we know? I wish they had opted for a newer transcription of the _Forza_ Overture, with the harp part included, but Col. Colburn wanted an old-school transcription similar to the sort heard in Sousa's time. I hope it is seen fit to eventually make at least some of this concert available for online listening/downloading!

I don't know about Luxon. Last time I saw him he was having trouble with tinnitus, which also afflicts another theatre great, Julia Mackenzie. But despite a few pitch problems he did a splendid job as a Falstaff to the manner born.

There's a terrific Shofar piece by Golijov, the only piece of his I can say I really liked so far.