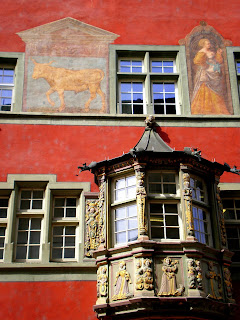 Erkerstadt or 'town of oriel windows' has long been the well-deserved nickname of Schaffhausen, thanks to the 170-odd adornments the good burghers had built to show their wealth in Renaissance times. Lottie and I hadn't intended to spend so much time there on her day off from duties at the Zurich Opera and the last of my visit: a short wander, perhaps, lunch and then on to the celebrated river falls downstream at Stein-am-Rhein.

In fact we were captivated. A good lunch certainly helped: we chose a winner down near the Schwabentor by virtue of a table in the hazy March sun: the SchuetzenStube, a restaurant popular with the locals which has a small theatre inside. It's run by two delightful ladies, Annegreth Eggenberg and Anita Schwegler, who've been together for twenty years. 'As business partners?' asked Lot. 'Business - and family' one replied, affectionately pinching the other's cheek. You see, we may abhor Switzerland for its minaret-banning and suchlike insularity, but in other ways it can be surprisingly tolerant (horrid word) and bordertown Schaffhausen is a good example of integration, host to a large Sri Lankan community. Just how well integrated, though, I couldn't say.

Anyway, it was after this that we began to examine the oriel windows more closely. Two of the finest houses are on Vorstadt: the Grossen Kafig at No. 43, with a mural of Tamerlane's triumphal procession 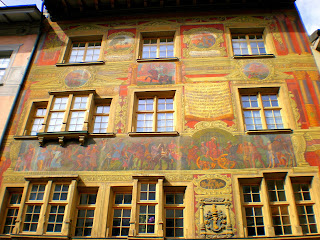 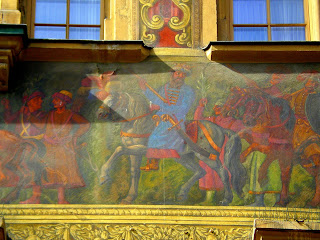 and the 1608 decoration of Zum Ochsen at No. 17. The ladies on the oriel window depict the five senses with mirror, glove, flower, musical instrument and cake. 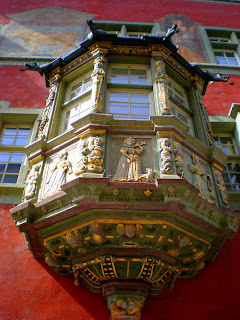 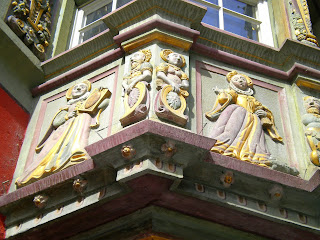 Rococo elaboration adorns Zum Steinbock round the corner at Oberstadt 16. 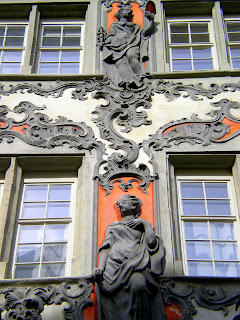 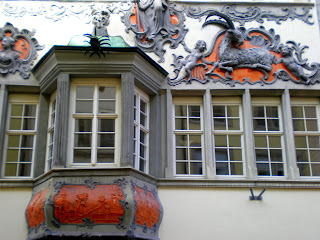 The most famous Renaissance fresco north of the Alps, we're told, is that of Zum Ritter, with knightly virtues on display including Odysseus's constancy in the Land of the Lotus Eaters. 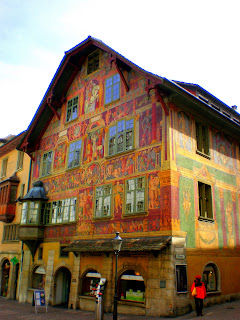 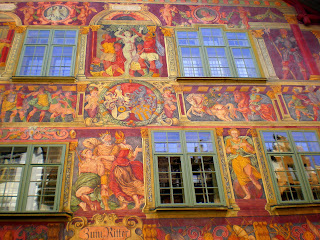 Alas, though, this isn't the 1570 original, which is in the local museum, but a 1930s copy. Our route then took us round the corner to the Munster, with more handsome oriel-windowed houses up the slope opposite. 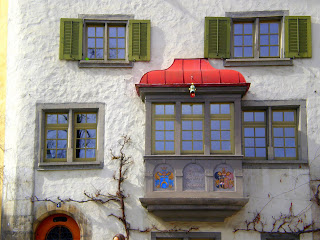 Even some of the less elaborate oriels have the charm of a dragon waterspout or two aloft: was there a citizen-craftsman who specialised in these, I wonder? 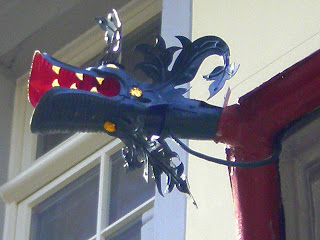 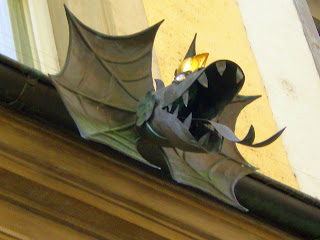 The Munster precincts include a neat herb-garden, favoured by a couple of resting citizens basking in the afternoon sun, and a grand Romanesque-Gothic cloister with spring flowers emerging in its pretty garden. 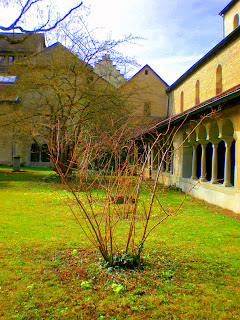 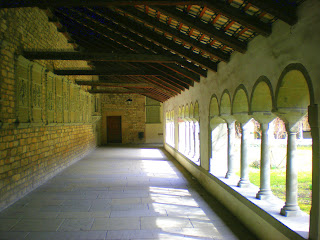 I'd like to have lingered longer, but there was a flight to catch later in the afternoon, so we hastened on to the Rhine falls and then back to Zurich. And I've finally done my willing duty by the Lucerne Easter Festival and written up some of the best concerts ever in my Arts Desk letter from Lucerne. So let's end by coming back up to date with Jean Nouvel's KKL Luzern. 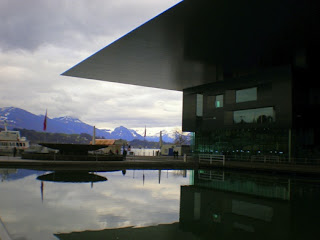 A great line from Sondheim's A Little Night Music:

As I have often stated
It is intolerable being tolerated.

Thank you, thank you for the sumptuous architectural and fresco tour.

If I may risk being labelled a pedant, the difficulty with the word "tolerate" is that it has two meanings which slide into each other. Sense One : the Sondheim quotation where the word includes a degree of patronising acceptance ( which is unwelcome).Sense Two : " happy to accomodate, despite the differences" - that is the sense used by Mr Nice, whose comment "horrid word" shows that the overtones of Sense One rather grate.

I'll be even more pedantic and insist on the Latin root, where the verb means nothing other than 'to bear' - and no-one just wants to be 'borne' (toleo, tollere, ferre, latum, or some such).

And insist on spelling 'accomModation' correctly, Sir David. Back to school with you.

Thus the latin root gives rise to Sense One, which I agree is the more dominant of the two. Maybe we need another word for "happy to accommodate despite the differences"

Shakespeare couldn't even spell his own name in a consistant manner.

How about just using 'accept' rather than 'tolerate'?