Spring in the City 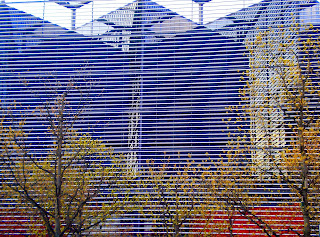 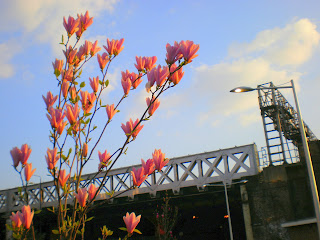 It's here at last, in bud, leaf and blossom. The skies are blue, wherever the volcanic ash cloud be lingering. Fotherington-Thomas was out and about on his bike last Wednesday, whizzing up to Maida Vale for a BBC Symphony Orchestra afternoon concert - a huge triumph for ten-year-old Lucien, if a little less so for his younger sister Jessica - then to London Bridge for a weekly engagement before wandering around to see what Southwark's been doing with the greening and on to Bengt Forsberg's brilliant, idiosyncratic recital at the Wigmore Hall.

Bengt led me on to a wave of Grainger enthusiasm, of which more in maybe the next entry, but for now I just want to expend a few pics on English city gardens. In the reclaimed zone around City Hall called Potters Fields, once a cemetery, there's been some adventurous planting, and even raised vegetable beds which seem to be respected in the public space. 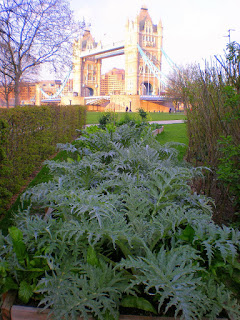 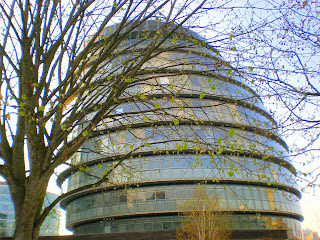 and beyond the herbaceous beds designed, the website tells me, by Piet Oudolf. 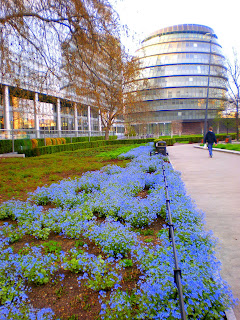 They have some growing up to do, but the peony shoots promise much.

Crossing Tooley Street, I was drawn to a magnolia gleaming in the sun. It's between council blocks on a patch of green before the viaduct. 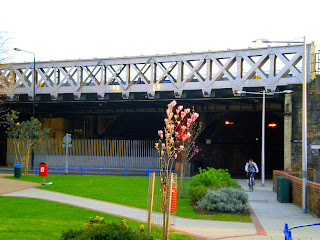 Another pink magnolia in an unlikely place is on an otherwise bald road in Chelsea. 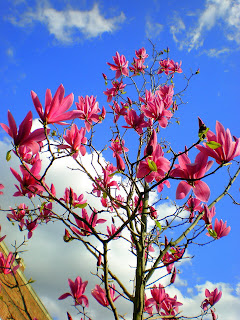 I saw it on my way back from Chelsea Physic Garden, where activity is slow; but the fruit trees begin to blossom 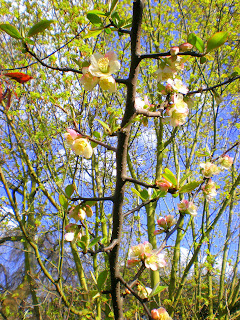 and I'd never seen a pitcher plant in its incipient state - just as creepy as the finished, fly-trapping monster. 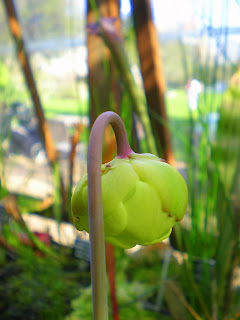 Two final Spring blossoms for good measure: one by a posher Chelsea House on the King's Road 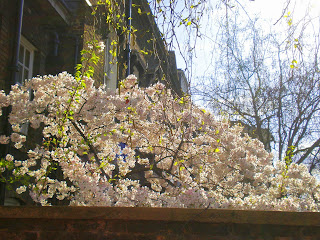 and another by the canal at Little Venice 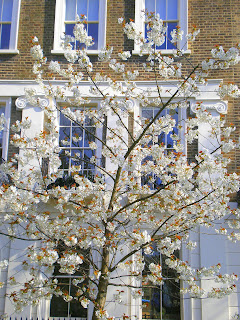 taken on the way back from the Maida Vale concert. Effortless master Jiri Belohlavek continues his run of great concerts - this was certainly one - with the penultimate instalment in his Martinu symphonies series at the Barbican tonight. I'm talking on the Third, as well as a bit about Stravinsky's Symphony in Three Movements and Prokofiev's Second Piano Concerto, at 6pm in the big hall, so do come along and say hello.
Posted by David at 10:07

Inspiring talk, and concert wonderful beyond words. Are you going to write about it?

Thanks, Thomas, and, yep, review up and running on The Arts Desk:

Not been so shaken up by a performance of a symphony since Rostropovich last conducted Shostakovich 8.

My wife and I bumped into you just after your talk at the Barbican yesterday and told you then just how greatly we had enjoyed it. It was really fascinating in its breadth and depth of cross-referencing, and your great enthusiasm for the Martinu Third was inspirational.

Like you, I had been refreshing my memory of the piece from CD, never having heard it live, but I had not expected such an overwhelming experience, perhaps the most outstanding performance so far of an already superb series.

You are right. As you indicate in your very comprehensive review, the work really is a towering masterpiece. How many modern pieces offer such beatific resolution as those pages for strings of wondrously hovering translucence towards the end of the last movement? Sublime.

I have a question. Am I correct in recalling that you indicated in your talk that the BBCSO and Belohlavek have made separate studio recordings of all the symphonies? Will these be for commercial release, and under which label? Surprising, as a new cycle has gradually been appearing on Supraphon, but a cause for great celebration if we are to get an 'integrale' from these concerts.

Well, you certainly didn't look like a hedgehog when I met you. And if you're prickly, it can only be skin deep, for truly spiky folk aren't so generous with their praise...

Yesterday in the talk I asked Peter Jones, the BBC Assistant Producer, if the BBCSO Belohlavek cycle was being recorded separately in the studio and if I understood aright his answer was that the symphonies were live (with, I guess, a little patching - which would be good to have for a few string entries yesterday, though marvellous that the power of a live performance would be caught like that).

To be honest, I was swept up by the emotion of listening through to Jarvi's recording yesterday morning - I hadn't heard the Third for some time, and it just caught me by surprise. If I was helpless at the end of the recording, how much more so by the end of the evening.

Hope to see you again for talk and performance of the Fantaisies Symphoniques, which should be on a par.

Sorry - I didn't answer the question about the label, and the fact is I don't know, or have forgotten - DG, maybe, since they took the Janacek Broucek?

And it now occurs to me you might be Patrick L rather than the first gentleman + wife that I met, but I'm honoured whichever.

I and my wife were actually 'the first gentleman + wife’ to meet you as you came out of the Green Room area. I am indeed highly flattered if you were mistaking me for Patrick L! Funnily enough, I had just been discussing your talk with Patrick and his good lady, and he described that ravishing string passage to which I was referring as ‘levitation’, which I thought was wonderfully apposite to both the musical and emotional effect. However, I didn’t feel it was proper to use his word, although I was sorely tempted!

Anyway, sincere thanks for providing the information. It’s a marvellous prospect to have the impact of these live performances on disc. Can’t wait. If you get any information about publication dates, please do let us know. And we will be there for your talk on the Sixth.