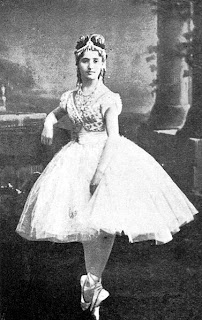 It's done and dusted, a little closer to the broadcast owing to the late scheduling: I've put Coppelia to bed for Building a Library on Radio 3's CD Review, and I certainly haven't tired of her. Delibes's score is full of the art that conceals art: clear and often ravishing orchestration; classically proportioned numbers and narratives that never go on too long; a perfect blend between the Hoffmanesque creepiness of the story on which the ballet is ever so loosly based and what Tchaikovsky called 'the pretty, le joli' in French music.

Totally out of the question at the moment to discuss my choice until the programme's aired on Saturday morning*, but I thought it might be helpful for those of you who don't find this score too twee - and, believe me, it's a tough cookie underneath - to see clips from the three DVDs I bring into the picture. Pure tradition first: an utterly enchanting two-act version from the Ecole de Danse of the Paris Opera Ballet. Giuseppina Bozzachi, who created the role of heroine Swanilda and is pictured above, was only 15 when she danced in 1870, just before she was cruelly felled by fever in the siege of Paris later that year. So Charline Giezendanner is just what we need for this childlike role - such eyes, such nimble footwork. And here we have a good stretch of the score, including the Lohengrin effect in the upper strings at the start. Pierre Lacotte is Coppelius and the decent conductor is David Coleman.

I did wonder, when Maguy Marin's updated free fantasia on the theme for Lyon Opera Ballet began, whether this was going to be another example of what the French call non-danse. But the corps numbers are ingenious and Marin, trained in the classical tradition from 8 to 18 until she discovered Bejart, manages to combine the funny and the sinister once the Marilyn fantasy-figure of Coppelia starts to multiply in a bizarre dream sequence in Act Two. The playing under Kent Nagano truly sparkles and the leg-scratching with the red shoes made me laugh out loud.

Finally, the Royal Ballet version choreographed by Ninette de Valois creaks a bit - all those grinning, nodding onlookers, so village-panto - and it's been supplanted for sheer affectionate humour by the Ashton Fille mal gardee. But unlike the other two versions, it does include most of the Act 3 divertissement, albeit reordered to give brilliant Carlos Acosta as well as wide-eyed Leanne Benjamin more to do. Couldn't find Acosta's leapyleapy on YouTube so instead here's this Act One sequence from the Ballad of the Ear of Corn (lovely violin solo) to the delectable Slavonic variations - based on a Polish theme by Moniuszko, my original piano score tells me.

Enjoy! You're stony hearted or a dedicated ballet-hater if you can't.

*The choice, I can now reveal, was Ansermet, with Mark Ermler and the Royal Opera House Orchestra a clear front runner, and a winner had they not lopped off twenty minutes of the score.
Posted by David at 15:46

Bravo, David! Un grand merci from stonyhearted follower in process of re-education. Poor balletomane Mother must have thought she'd given birth to a whole parcel of serpents' teeth, as I frowned & fidgeted through many a matinée @ The Garden, preferring ponies. So the Ninette de Valois version = v familiar (frown, fidget).
Look forward to the broadcast. You're the best kind of critic: one who illuminates as much as criticises.
And, yes, I did enjoy the comparative show this morning!

Thanks, Minnie, as ever. Doesn't a pony pull a cart on stage in La fille mal gardee? I guess that might have kept you happy for a couple of seconds if your mother took you to see it. But the Lippizaner horses pirouetting in Vienna might have been a better bet.