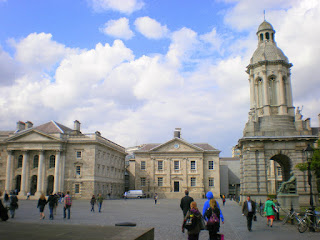 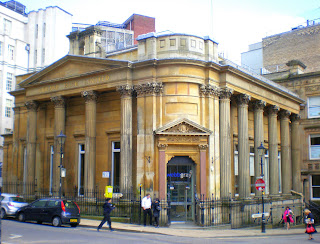 Dublin, of course, is by no means exclusively Georgian - in fact the campanile in Trinity College's forecourt, above top, is mid-19th century - just as Victoriana may not be Birmingham's sole claim to fame (the former Midland Bank on Bennett's Hill is early Victorian, designed by Rickman in 1840). Seeing the two cities a day apart, Dublin for the first time, did incline me to compare incomparables.

Maybe it was because I only had one sunny hour at liberty in Birmingham before rushing off to give another last-minute pre-performance talk for the City of Birmingham Symphony Orchestra that I relished it all the more, and didn't experience any deflating sense of provincialism as we did at the start of two days in Dublin as our raffle-won weekend break. The CBSO concert, by the way, was very fine: Vedernikov of the Bolshoy knows how to pace and maneouvre his way through Prokofiev's Sixth Symphony, though the inner pain didn't always come through, and best of all was the phenomenal and seemingly effortless Steven Osborne, razor-sharp alongside the orchestra in a revelatory Shostakovich Second Piano Concerto: no fatuous showcase, no sentimentality in the slow-movement melody, full of surprisingly scary things and the kind of thunderous orchestral pianism Stephen with a ph, Mr. Hough, simply can't muster. I took this photo from Steven with a v's website, so I hope the link suffices. 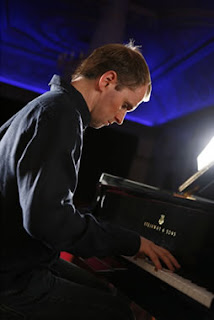 Anyway, Dublin does have Georgian splendours in the south of the city, but so bigged-up are they that we couldn't help feeling disappointed after Edinburgh, Bath or - that major serendipitous discovery last summer - Bristol. The main problem is the lack of uniformity in the jumbled colours of brick and stone. Best, perhaps, are the peaceful squares, though the big city gardens are also Victorian - St Stephen's Green and my favourite just to the south, the Iveagh Gardens laid out by Ninian Niven in 1865, by virtue of its total peace and quiet. Above this monumental pile of rocks a freaky feathered friend sang beyond the loudest, wildest variations of any known blackbird. 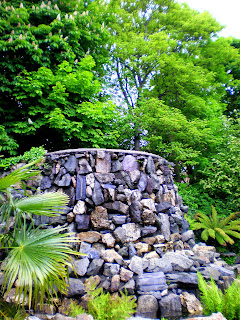 On the way to meet the splendid Puffin Moynihan for a drink at the Shelbourne Hotel - a meeting which led to much the best chunk of our weekend - we also found ourselves enticed into the church founded by Cardinal Newman for the catholic university, Our Lady Seat of Wisdom. An intriguing Italian-style excrescence added shortly after the church's founding in 1856 sits alongside Georgian university houses. 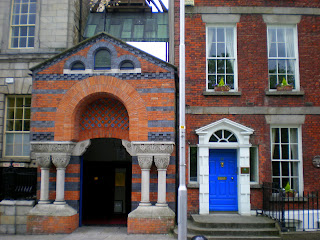 It's no more an anomaly, I suppose, than the Burne-Jones windows which are the real selling point of Birmingham Cathedral, built in 1715 (this west window of the last judgment was added in 1895). 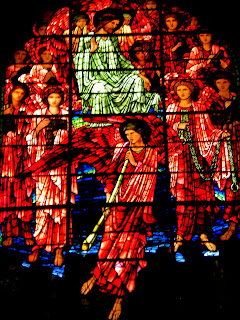 I guess I had a better time in Birmingham's resplendent Old Joint Stock Pub, full of locals late on a Thursday afternoon 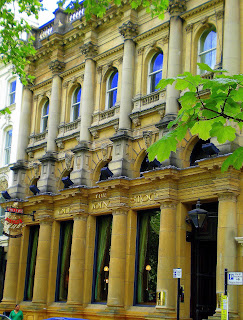 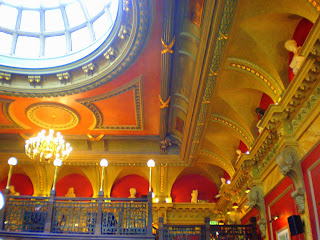 than we did in what should have been a comparable gem in Dublin, Bewley's Tea House (we had to go to honour beloved Dame Beulah and Thomas). The building and its various salons still have their innate charm, but the ladies who owned it sold it to a chain and once-proud Bewley's now serves up lumpy scones with ersatz jam and cream. We had to tell the nice Polish girl who served us - Eastern Europeans stock the service industry here, because the Irish are generally too grand these days to condescend*, but that means the legendary native welcome isn't easy to find - that it was simply horrible, since she asked.

One black mark. One more for the pretentious hotel they'd put us up in, a vast affair ill-advisedly decked out in Lawrence Llewelyn Bowen swags and dusty, purple covered high chairs. And another for the biggest tourist rip-off going, nine euros each to see two pages of the Book of Kells at the end of an OK orientation guide. Beautiful Celtic illumination indeed, but the page I really wanted to see wasn't on display: 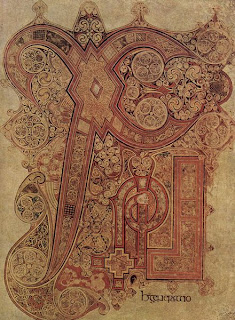 Fourth black mark for a substandard Italian meal, which did at least allow us to sit out on a terrace under braziers, and horrid though the hotel was, we got an undisturbed night's sleep albeit in a stuffy room with the window shut. The next morning, after a noisy hotel breakfast shared with screeching hen party women from Manchester, we headed straight for the National Gallery of Ireland, and found fault with that too. What a huge collection, with some real treasures - three marvellous Guercinos courtesy of Sir Dennis Mahon, a wall of superb Goyas, some fine Dutch interiors with a Vermeer very much as the centrepiece - but how higgledy-piggledy and badly lit. Jack Yeats is an artist I'll be dodging in future, though I loved Orpen's portrait of Count ('Cunta' in Gaelic) John McCormack. 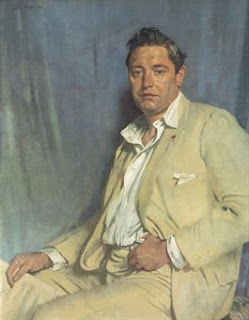 We could easily have passed a museum-packed time had we hung around in Dublin the full weekend, but a much more enticing prospect was in store - a trip to stay with Puffin in the courtyard cottage of Huntington Castle, Clonegal, meeting into the bargain its exotic flora and fauna. Next instalment follows in due course.

*and the young 'uns who do serve can be very impertinent. As I couldn't get an answer at Trinity about the two gigantic trees in Library Square, I asked in the Tourist Information Office. The two girls giggled and said 'are you having a laugh?' I wasn't, and I've since found the information I wanted online, thank you very much.
Posted by David at 10:43

Blige, Brissle eh?! Chew'm not wrong there, David - the areal's gurt lush, inny lurk?
Dublin - ah, shame ... but the constraints of a two-day trip must have been painful. Bewley's NOT what it once was (& the demolition of most of Georgian Dublin denuded the city of much beauty before Guinness & his chums began concerted conservation). But there are still plenty of pockets of great charm with splendid cafés/restos & specialist shops, esp if you wander a bit further south than you did (30-40 minutes' walk from the centre - I know, I used to do it regularly a few years ago when living there!). The National Museum has fabulous Celtic artefacts, and the Museum of Modern Irish Art is definitely worth a visit - if only for the lovely, 17th century architecture of the venue (former military hospital). A trip up or down the coast on the DART is a must for sunny days (Malahide in the north, and Greystones in the south are recommended). Above all, Dublin's a city on a human scale.
Do hope the rest of your Irish jaunt went/goes well.
Descriptions of CBSO gig met l'eau a la bouche!

Of course, Minnie, you with your endless curiosity would have been the right person to consult on Dublin nooks and crannies. Is there anywhere you haven't lived?

So you do dialects as well as languages. Why am I not surprised?

I think, at any rate, that disappointed though you may be that we didn't explore further, you'll be entertained by our time cheek by jowl with the Fellowship of Isis at the Clonegal pile...

1840 may technically be early Victorian, as she was 21 years old and had come to the throne in 1837. But the horrors of the decay of taste really got going only later.

And to think we are thinking of retiring to Dublin but after reading your comment, I thought you had been to Ottawa for the weekend. Sounds terrible.
I was in Dublin 40 yrs ago it was charming then. Things change.
Maybe we will just move to the Orkney's and drown our sorrows in scotch.

Oh dear, the Irish tourist board will want my blood, Laurent. Do take note of Minnie's wise words - ours was a superficial impression. But a small city can't really take a bursting-at-the-seams tourist trade. Plus there was a big football match, and the hen/stag party horror makes us (the Brits and probably the Irish too) the bane of eastern Europe - they all fly out there on Ryanair cheapies and drive around in Shazzabangs and proles royces (copyright words from us, one of which reached the dictionary).

Surely, Sir David, not all the neo-Gothic late Victorian stuff is monstrous? Matter of taste.

J thinks Minnie's doing a Joyce rather than a dialect. I ought to have recognised it from my one Zurich class on Finnegans Wake. But I was about to confess that I read Ulysses (most of it) so way back when that JJ's Dublin locales no longer resonated with me.

Alas, no - apols to J., but I wasn't doing a JJ. Would I dare do that to the 'Jinglish Janglage'? Besides which, haven't an iota of his genius so if there is a Joycean flavour, it is unconsciously added - I love 'Sunny Jim' (who stayed here & wanted to stay put, but Nora + offspring didn't ...) & took part in annual Bloomsday show on Tour Bellanda last year.
Would love to tell people more about the Fair City: it's rich beyond one's dreams, if one knows where to look.
Ireland a delightful country: strong sense of identity/national pride/respect for culture & history - and,yes, the people really are friendly. And fun!
No bias there, then ...
So glad to hear you & J had more luck away from Dul-bin; looking forward to next instalment.
Haven't lived in Scotland, although have ancestral links there + surviving rellies (which might explain why not ;-)!).

Should perhaps have added that it was only a disappointment after our wondrous time a couple of summers ago on the Beare peninsula, staying at Derreen near Kenmare. There indeed the friendliness of the people was equal to the best of the Italians (mountain folk of the Abruzzo).

Think I'd stick to the west coast, but would be very happy to see more of Dublin (we were indeed going to head up to Malahide had we not been whisked off to Clonegal).

Thank you so much for this interesting post; having working in Birmingham for many years it was great to hear your comments on the Old Joint Stock, and I'm also a fan of Georgian Dublin - well, Georgian buildings in general (I've blogged about Dublin here http://tinyurl.com/yzgbtrz). I'm pretty sure I also went to Bewley's Tea House and found it tourist central. If you can get hold of Peter Pearson's The Heart of Dublin: Resurgence of an Historic City it's an amazing book and helped me to see the city in an entirely new light.

Thanks, 'Peg' (isn't it?), your blog is another valuable byway and I'll be sure to read that book: with well-informed enthusiasts like yourself and my New Best Friend Minnie, I'll be sure to get to know Dublin better in time.

Looking forward hugely to an excursion in a couple of weeks' time to Bradford upon Avon, which I gather from Alec Clifton Taylor is to be celebrated as much for its Georgian townhouses as its Saxon church.

David, thank you for that wonderful picture of John McCormack by Jack Yeats. Casual, yet posed (think of the intentionality that could be extrapolated from pose, the hand in the trouser belt, the way that there's a whiff of deshabille!). A mere step away from Philip de Laszlo... Thank you.

I've made a note to check out Philip de Laszlo, Colin. Yes, the commentary stresses that McCormack was on the cusp of middle age and that's been well caught.