Trieste: not quite nowhere 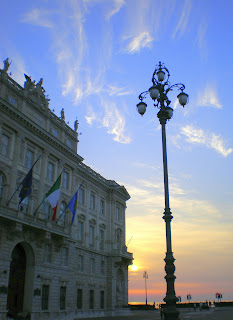 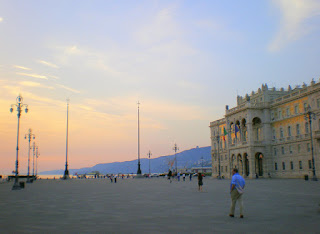 You probably guessed my unadvertised absence as time out of the musical world, and where better to take it than the ideal city of Trieste, excurting north to the Julian Alps for a few days' contrast? I've dreamed of going to this chimerical place since reading Jan Morris's very personal notion of it in Trieste and the Meaning of Nowhere. 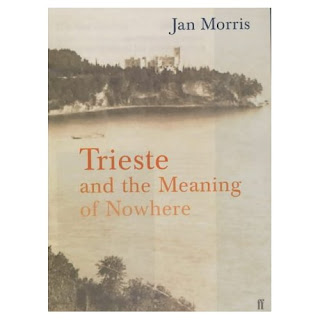 She means 'nowhere' in a positive sense: the real nowhere people, she writes, form a fourth-world diaspora that transcends race, age, nationality and sex:

They share with each other, across all the nations, common values of humour and understanding. When you are among them you know you will not be mocked or resented...They laugh easily. They are easily grateful. They are never mean. They are not inhibited by fashion, public opinion or political correctness. They are exiles in their own communities, because they are always in a minority, but they form a majority nation, if only they knew it. It is the nation of nowhere, and I have come to think of its natural capital as Trieste.

Why? Partly because of the city's geographical position, on a narrow coastal strip in the north-easternmost corner of Italy, 'closely enveloped by Slav territories' (the Slovenian border is five miles away). Its biggest wave of development came when Maria Theresa developed it as the Austrian empire's port, but crucially a free one, not a military station. To the Austrians we owe the layout of the grid plan at the base of the rock on which the old Duomo and castle sit. Trieste isn't rich in art and architecture like nearby Venice or even smaller cities like Padua or Mantua, but it's a wonderful base and sits on a wide, sweeping bay beneath the limestone rockfaces of the intriguing Karst. 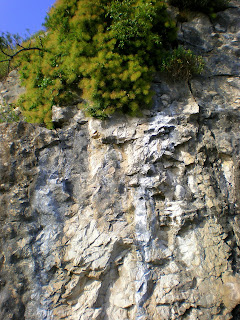 Take the train westwards for half an hour and you hit the flatlands and the lagoons, but here you're enveloped by natural beauty and wildness.

Great art has been made here: Joyce devised much of Ulysses and wrote A Portrait of the Artist as a Young Man as well as the play Dubliners in dark corners of the old town; Rilke penned his groundbreaking Duino Elegies at a castle just along the coast; the Victorian Richard Burton finished his Arabian Nights in a tavern on the hill and would have strolled along the so-called 'Napoleonic way' on the karst to see something like this view (if less developed). 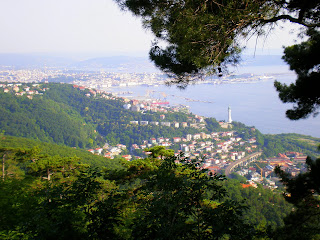 Italo Svevo celebrated Triestinism in a novel I've yet to read, and must find out if it's available in translation. Verdi had I Due Foscari and Stiffelio premiered in the still-handsome opera house (we missed Otello and a concert conducted by the great Nello Santi by a matter of days); Mahler came to conduct and found the people 'terribly nice'.

Alas, so much to store up and write about - I'll do the Joyce Bloomsday report in a while, and I want to cover temples of various sorts, too. Let's start, though, with some photoimpressions from the Molo Audace, which seems to me as perfect an epitome of Trieste multi-culturalness as anywhere. Old ladies walked their dogs and played with their grandchildren; Slovene and Croatian amateur fisherman dangled their rods and their pot belles over the jetty; the odd tourist (there aren't so many here), a group of Spanish students and businessmen on their mobile phones from the nearby conference in the converted fish market came and went. At 7pm, the sun hit the buildings on the harbour and I did a 360 degree fillum, since my camera permits it - starting with the Piazza Grande - since patriotically reclaimed by the Italians as the Piazza dell'Unita d'Italia - with its grand Hapsburgian piles of commercial and civic authority, wheeling along the harbour front to the Greek church where Joyce spent many a happy hour and then out to sea, across to the 1930s lighthouse and back to base. It seems better to do it in stills, though. The Piazza from the Molo with the old town rising behind it: 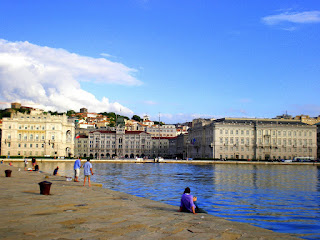 Moving along the shoreline to the Greek church flanked by a couple of palaces: 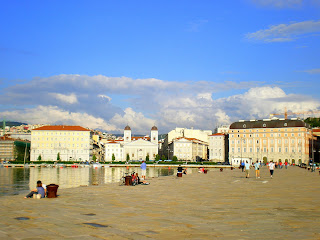 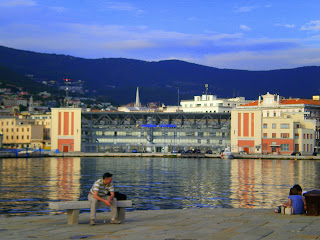 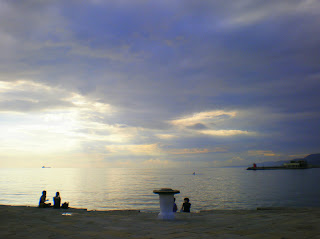 A Triestine dame reflects against the backdrop of the working harbour: 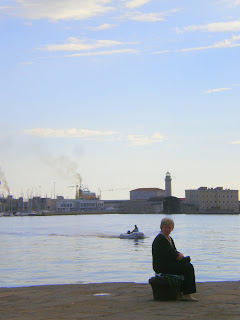 It was a strange sensation, comparing my first reading of Morris's book when her writing conjured up mirages, with a second undertaken at leisure in the place itself and tallied with my own impressions. It was hard to find any melancholy in Trieste as the first heatwave hit Italy and we basked in temperatures of 30 degrees or sought out shady retreats (and there are plenty in this city). All I know is that I'd happily settle here for six months or so, and if I didn't produce a Ulysses, at least I reckon it would be conducive to good creative work. And now, back to the grindstone: got a heavy workload this week, and apologise for absence, but I don't think it pays to advertise awayness to the world.
Posted by David at 09:47

I would have been very tempted to call this post 'Bonjour Trieste', but that is because I am cheap.

Kind of in line with Joyce's 'At Trieste ate I my liver', which is apparently a play on 'triste etait mon livre'.

I am so glad you are enjoying Trieste - it really is a special place. I read Morris, at your recommendation, after my trip there. Wonderful words and pictures as always.

We loved Trieste and the Adriatic so lovely, romantic and elegant, not to forget excellent restaurants also.
I was wondering where you were.

Think we should have taken your advice on the restaurants as well as Le Corderie, which we came to love for its delightful staff and, of course the breakfasts. Evening meal-wise we had two excellent meals and two bad ones (one very much our own fault, not being willing to venture more than twenty minutes from the hotel).

Like you, I've dreamed of visiting Trieste. A well-travelled - and exacting - acquaintance once told me it was his favourite city. Sounds like a highly civilised one - a place that hasn't had to prove itself, but has been left to grow at its own pace, suiting itself; that 'free port' status of later development evidently did much to enhance it - ie open to the world, with the confidence such status brings (& few of the drawbacks).
Ravishing photos; love the pink and blue shades you've caught.
Great to see you back: greetings from another city between sea and mountains!

Exactly right, Minnie - I know (from our very short acquaintance) that it's your kind of place. And, yes, of course its sweep and its 'monte e mare' mix did remind me of Nice.