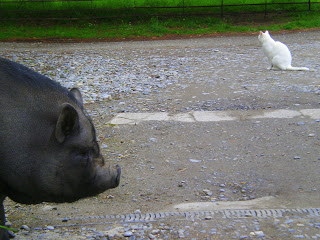 I promised a return visit to Huntington, previously Clonegal, Castle to view the menagerie. What a splendid bunch, all living in happy co-existence (which usually means, with the beasts, more or less ignoring each other but not keeping out of each other's way, either). The big chap above is Boris, one of two pot-bellied pigs which will NOT be ending up as bacon, even if the Tsar's slightly less large, princely companion is Hamlet yclept. Here they are snuffling around in the oak grove 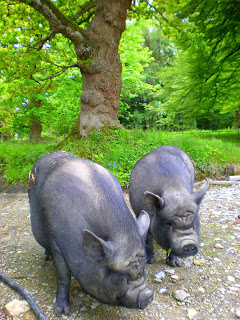 and dozing companionably in their pen. 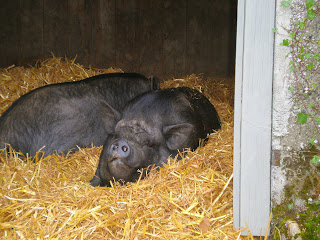 The fearless feline hanging out near Boris in the top photo is Spook, upholding the tradition of a ghostly benign white cat at the castle. No matter where you left him, if you go into a room Spook, spookily, will always be there first. 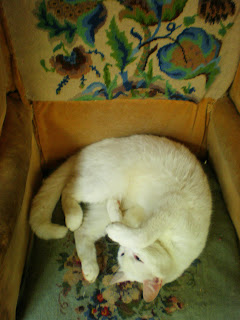 There's also an old cat, Jaffa, which spends some of the time curled up in the kitchen but is usually - again, unlike Macavity - there at the scene of any crime. You could probably draw a dream-bubble around the fish... 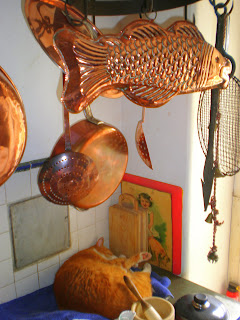 Much the most active of the pack is the handsome Otto, a Bernese mountain dog (aka Sennenhund) with adorable tricks and manners. Like Sally and the Rev Carl's great danes, it's a huge but gentle beast. 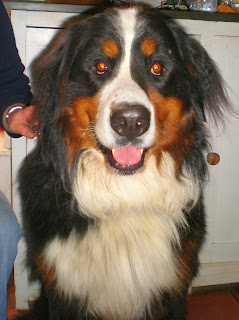 Others guard the house. Above the armadillo in the next picture is a gharial. Olivia's mother shot the brute way back when. We could identify the creature from the ones we'd seen in Trivandrum Zoo. 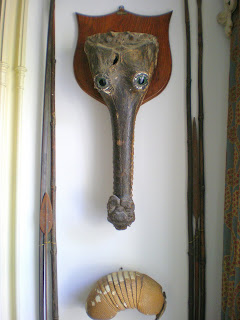 You can take your pick of antlers, gazelle heads and stuffed big cats 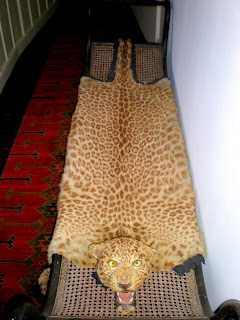 but most arresting perhaps is the case of smaller fry. 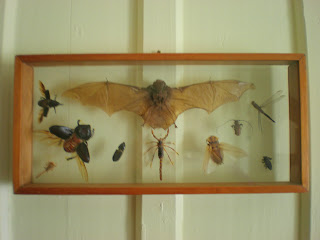 Clonegal/Huntingdon sounds - and looks - even more entrancing than I'd thought thus far.
Love the spectral, haunting feline - Spook: what a marvellous idea! And cat, of course ...
Pleased to see Boris Godunov getting on so well with the Prince of Denmark, and it's good to know bacon being saved there.
As for gha ... now off to look it up!
Delightful post, David, thank you.

So have you joined the Gharial Conservation Alliance as a result of your promised research?

Oh, those pot-bellied pigs! If only I had room to keep a couple, too.

Cats is superior
Dogs is inferior
Pigs is equal

Ugh,no - 'fraid not! Anything remotely reptilian, & I'm off at high speed! Cat-+horse-person here:
'All animals are equal, but some animals are more equal than others ...'
Meant to add that hoorayed at yr ref to Sybille Bedford. Loved her insightful biography of Aldous Huxley + the portrait of the mother in (largely autobiographical) 'Jigsaw' is impossible to forget.

DD - is that Winston?

Yes as I quoted it, it is Winston, but the same sentiment can be found elsewhere so it may not have originated with him

It is noticeable that nearly everyone referred to Winston as Winston. Otherwise it was Lloyd George, Balfour, Baldwin, Attlee, Bevin etc etc

Probably because Minnie mentioned 1984 on another string of comments...interesting, isn't it, even 'Maggie' is mostly 'Thatcher'. But we try not to think of her too much (stirs the Damant pot au feu).

How wonderfully the UK economy bloomed during most of the Blair government, thanks to the adoption of Mrs Thatcher's economic policies, and how sharp was the fall when the principles of the grocer's daughter were missing