Travel in a time of football 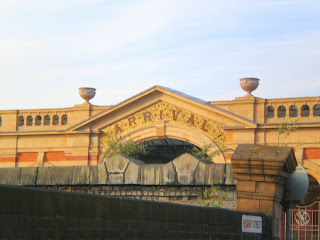 I haven't seen a good match in years, which is not to say that I wouldn't be drawn in if I were at the house of a friend who wanted to watch the World Cup. But I don't think I'll easily forget where I happened to be when key games took place. How many years ago was it when England played the Cameroons in the quarter-final and I was sitting in the since-defunct Lumiere Cinema with six other people watching Eric Rohmer's A Tale of Springtime?

This year I've been on the move or in a theatre while the action was being played out. On Wednesday I had to give a talk in Leicester - station depicted above - before one of Temirkanov's three major Prokofiev/Tchaikovsky concerts with the Philharmonia (I caught the first programme in London and wrote it up for The Arts Desk; and all I'll say about it here is that the man is surely the greatest Tchaikovsky conductor still living). 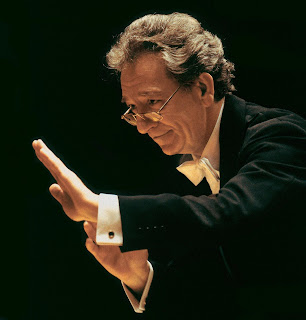 So at about 3pm I strolled up to Barons Court tube - too hot to cycle to St Pancras - and caught diverse roars through open windows and outside The Curtains Up pub (never sure how they mean that to be punctuated). But from Barons Court to Kings Cross on a surprisingly packed underground and from St Pancras to Leicester on a fairly busy train, not one whimper of news about the match's progress. As I strode up the hill towards De Montfort Hall, it was impossible to tell who'd won. A couple of twats in tall England hats lurched around noisily, but gave no hint of victory or defeat. It wasn't until I was in the hall that I found out.

Anyway, Leicester is worth a quick digression, though I still haven't had time to see the Curve (was still in the middle of the Coppelia script on Wednesday, and had to rush back to meet Ruth and friends after her Cork Street opening, more of which anon). The concerts have a loyal if ageing following, and while I spoke they were unveiling a new memorial sculpture in memory of a Philharmonia friend: 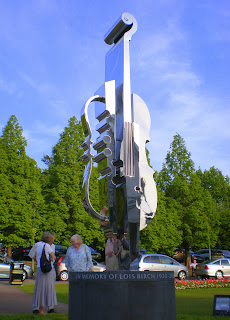 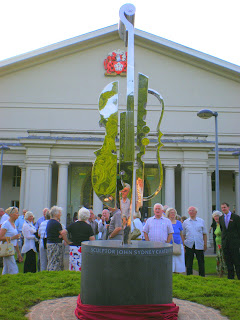 The walk to the hall through the back streets is leafy and pleasant, the odd rolling drunk or drug addict excepted. I love the railings of the bizarrely if aptly named Oval Square. 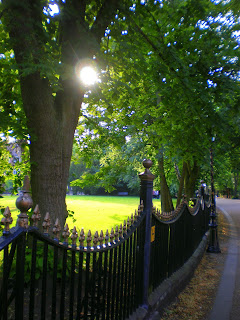 And so back to London that evening in an atmosphere of calm, and a nearly full moon above St James's (the clock time, like the one in the photo further down of Trieste's Caffe San Marco, is of course way out). 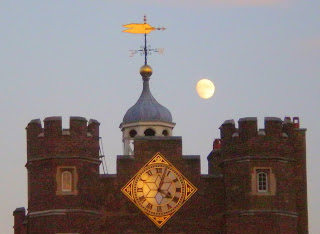 There was, though, a midsummer madness in the air around Piccadilly owing to the Cork Street bacchanalia. Doziness reigned the next morning as I pedalled to the BBC to record the Building a Library programme. A white van man nearly knocked me off my bike as he turned without indication across the cycle lane and into Earl's Court. Sundry specimens of erratic driving compounded the feeling that the Englanders were hung over after celebrating the match.

Finally - thank God, they're out now - there was the question of negotiating London before and after the England v Germany match. Our only chance to catch the ENO Tosca, and it started at the memorable hour of 3pm. Must have been more exciting than England's trashing - in fact I was almost delirious after Act One, mostly with the sheer pelt and skill of Puccini's theatricality as projected by Amanda Echalaz and Julian Gavin - unquestionably the most convincing lovers I've ever seen in this opera - and by Ed Gardner's sensuous-pacy work in the pit (what beauty in the orchestral postlude to the love duet).

Act 2, in ex-diva Catherine Malfitano's period setting, went through most of the usual motions but had a few ideas of its own, and Michaels Moore was almost convincing as an elegant, sex obsessed sadist (the basic dark-baritone timbre hasn't weakened over decades, though the detached low notes don't come out well). Loved the way Echalaz's poor girl broke down after the murder and got frightened by the roll of drums anticipating the execution. The line in her 'vissi d'arte' ('love and music' as ever was in Edmund Tracey's well-wearing translation) was a little disrupted by the vibrato which could quickly become a problem, but she soars thrillingly and she's such an intelligent singer. The final touch, an artistic death, was superb and banished memories of Jane Eaglen looking like Robbie Coltrane in drag lumbering up the ramp to flop off (though that was her heyday, and how superbly she acted with the voice then). Both production photos of the current ENO production here by Robert Workman. 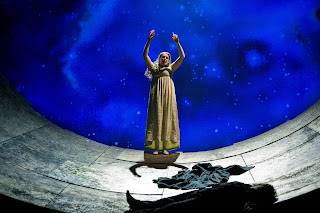 Echalaz's was easily the best Tosca I've witnessed since Nelly Miricioiu's in the early 1980s, and I'd love to see her as Salome. Ma guarda, cara, guarda.

By the opera's half way mark, it was impossible to tell whether Julian Gavin's ringing 'vittoria!' ('victorious' in the translation) was being echoed in the streets. 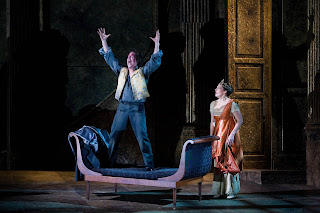 At the second interval it was all a bit quiet to start with. Then police vans started shooting up Charing Cross Road, sirens blaring. The nice man in Pret a Manger told me the bad (good?) news - 4 to Germany, 1 to England. Then we saw a pack of angry youths with feral, scrunched up faces looking for trouble.

Yet I have to say that over in Trafalgar Square after the show, despite the heavy police presence, 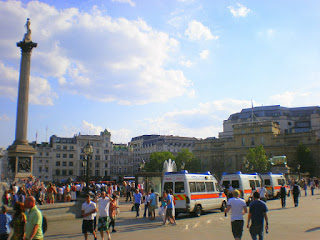 if you hadn't known of England's defeat, you'd have thought the fans were celebrating. 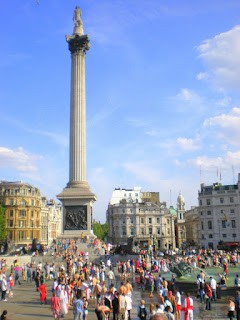 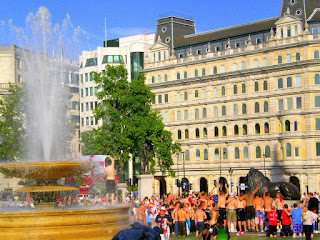 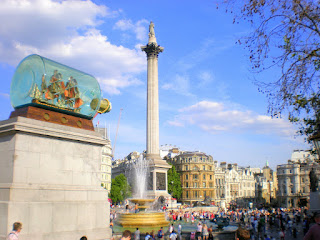 Once through Admiralty Arch, it was the usual summer-in-the-city Sunday scene of brass bands and tourists ambling along the cycle lanes. The hot but glorious weather might just have taken the edge off the disappointment. Well, come on, Ghana.
Posted by David at 09:40

from Philip Warner, LSE
Further to discussions in earlier blogs about Martinu recordings, I have just acquired Mar 5&6 on a Supraphon disc with Belohlavek and the Czech Phil; it sounds just wonderful, aided by Krell amps and Bowers and Wilkins 801s. The CD was on special offer in HMV.
Philip Warner
By the way I connected to the website of your Mali-dwelling Swedish friend Sophy and her blog, which often made Jennifer's Diary seem like the musings of a cloistered Carmelite nun. Where does the grand Sophy get such incredible energy and drive? It is quite amazing what she gets up to; I felt exhausted just reading about such wonderful, cosmopolitan adventures. Would that I had the stamina and derringdo for this level of global larking about.
Phil Warner
London Scool of Economics

Sophie was, as you've probably read, the muse for this blog. Of course no-one I know lives, as the cliche says, the dream quite like she has, with her mud hotel and her Malian life, to which she's so doggedly committed - for all the larking about when she travels.

Yes, the Czech Phil/Belohlavek performances are wonderful. But I still can't wait for the BBCSO recordings to be issued - I thought he'd tapped a great vigour and intensity in the few intervening years.

So hard not to get caught up in at least some of the footie excitement - even if that's restricted to the fearful sight of sub-human supporters on the verge of rioting.
A delight to read your encapsulation of the complexities and clashing worlds of London on a summer evening, which evoke some similar memories; love the eclipsed full Moon over St James's Palace clocktower (the clock's right x 2 a day, anyhow ...).
The passionate production of 'Tosca' sounds a marvel. Unprintable French word denoted (inter alia) 'good luck' for your friend's show in Cork St!
BTW I, too, commented on Sophie's superb blog; but evidently too vapidly for words.

Hey, I'm back...sorry for the long silence and fun to find these messages. But expand, Minnie, on how you must have commented too vapidly on our Sophie's blog? Have you been blocked in your expression or summat? Must be an accident if so.

from Phil Warner, LSE
Would you just let me know when you think the BBCSO's Martinu recordings are likely to be released, and on what label? I am sure you are privy to the sort of inside information not available to others. I very much liked Belohlavek's earlier recordings with the BBCSO, on the now-defunct(-ish)WarnerClassics label, I think.
I am sure NO-ONE else lives as your friend Sophy does, as you mention; who would have the sheer outgoing enthusiasm and drive? All I was asking you was where you thought she got this from - it is a very rare quality, although many like to pretend they have it.

I spent a glorious four months in 2003 touring Sweden and visiting many of the absolutely magnificent(and beautifully preserved)country houses there, both grand and otherwise. They are well worth investigating on your next trip to Scandanavia.
Phil Warner, LSE

Sorry, Phil, I found out and then I forgot, and there's no-one at the BBCSO picking up messages at the moment. What were Jiri's earlier BBCSO recordings? He certainly did quite a lot with the Czech Phil for Chandos as well as Supraphon, but wasn't it Andrew Davis who did all the Warner recordings with the orchestra?

There is, of course, a Broucek concert performance on DG. And I've been pestering the BBC Music Mag to bring out their Mahler Third or Ninth on a cover CD.