A castle in Ireland 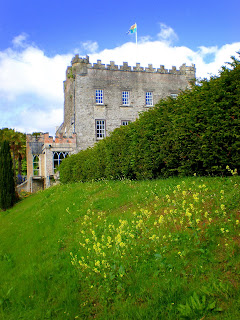 'Elizabeth's home was merely a great stone box,' wrote Virginia Woolf in 1934 of her visit to the Bowen homestead in Ireland 'but full of Italian mantelpieces and decayed eighteenth-century furniture, and carpets all in holes'. The same might almost be said of Huntington Castle in Clonegal, at the foot of the Blackstairs mountains and at the end of the Wicklow trail which heads south from Dublin, except that the mantelpieces, the furnishings and the fabrics are mostly in elaborately restored and well tended good nick. The 1625 'box' is a rarity among mostly Georgian Anglo-Irish residences, and it was fortunate to be spared destruction during the Troubles. We spent but a night there in the courtyard cottage Puffin Moynihan rents from the family, but it felt like a lot longer, in the most positive sense: as Wagner's Gurnemanz says to Parsifal, 'you see here how time becomes space'. 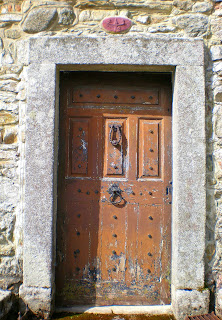 The present incumbents talk quite sensibly of ghosts seen or sensed over decades, not least the Cavalier soldiers who tramp around the early 17th century battlements, but without a sense of making your flesh creep; these are benign spirits. Made benign, perhaps, by the divine works over the decades of Olivia Robertson, priestess of the Fellowship of Isis and daughter of Lawrence Durdin-Robertson, who one day was struck by the revelation that God was a she. Olivia, now 94 and glimpsed occasionally around the house sporting a jaunty crotcheted beret, carries on the sacred rites. 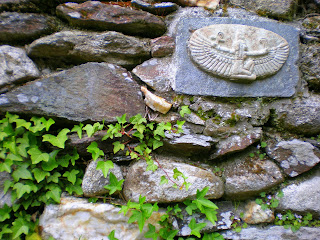 I couldn't make much headway through the literature, in which the rituals are all clearly outlined - you can read more on the website - but it doesn't seem a bad idea, connecting goddesses of all religions through the medium of Isis and holding ceremonies on any one of the twelve (zodiacal?) altars consecrated in the former castle dungeons. 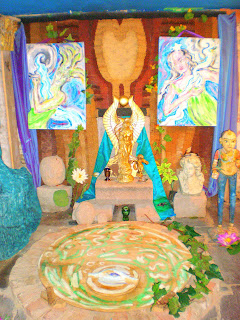 This is one such, with the ancient well in the foreground down which Olivia recently plunged, only to clamber out and appear at table dripping but otherwise unharmed. Her artwork is, shall we say, rooted in the 1960s; there are more serious artists at work in the shape of co-chateleine Moira and her extremely talented son Harry, whom J got to know when he invited them to exhibit in the 12 Star Gallery. I'll introduce their menagerie - pigs, dog and cats - in another entry; but this might be a good place for a quick spin around the grounds. There's an ancient yew walk which may be the oldest in existence, and certainly the most awe-inspiring I've seen 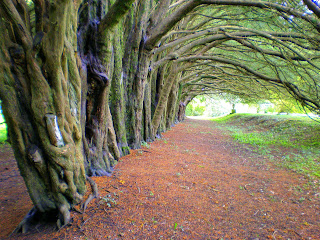 and plenty of old trees flanking the outline of a 17th century garden (work in progress). I loved its overgrown quality, the mossy, lichened bridge 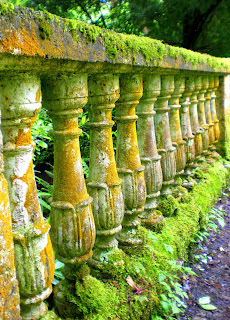 and the half-concealed statues, like this one of Dionysus towards the kitchen garden. 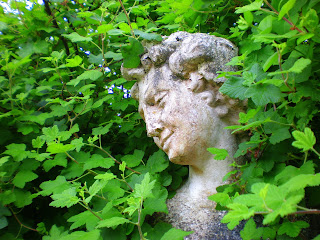 A walk alongside the river Derry before it joins the Slaney 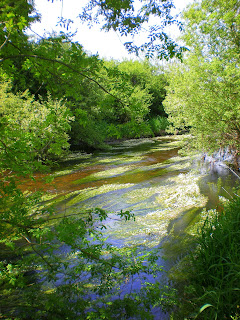 takes you to the visionary Pagoda House where dwells a long-time family friend. Alongside the nearby stream, where gunnera sprouts, stand three thriving tree peonies, at the end of their flowering in late May. 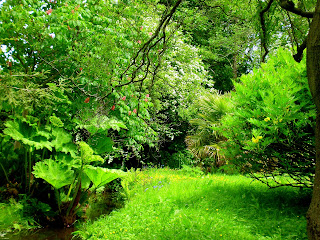 Then the circuit will lead you back to the castle via an oak alley. 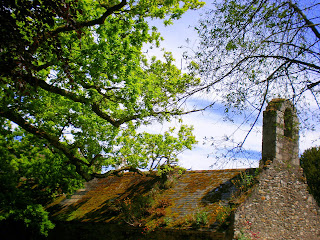 Nature can be as splendid within as without: this is a cutting from the famous vine at Hampton Court. 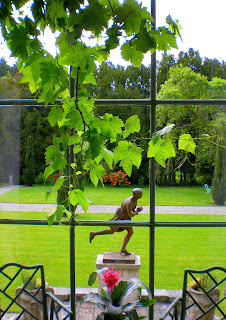 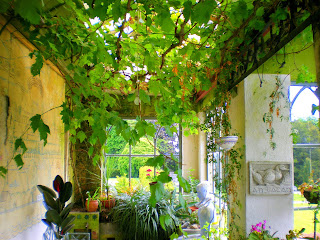 You can see all this for yourselves on selected summer afternoons when family members give tours - details here - so I'm not spilling any secrets. And, yes, you'll be admitted into the underground temple too. More anon. 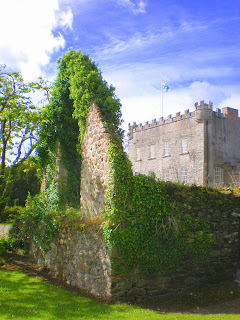 Ah, the Emerald Isle in glory - your illustrated tour shows a small corner of it to great effect. How lovely! I'd love to live in that pagoda. And the Son of the House's work is exquisite.
So glad to hear you and J had such a series of treats of all kinds after the Dublin débâcle - or, rather, disappointment (which amounts to the same thing in this context IMO). Look forward to meeting the menagerie. Bon weekend & bon voyage.
PS re previous kind comments of yours: am utterly rubbish @ languages (lamentable français a woeful case in point!); but adore dialect - plenty of that here.

Oh, the Dublin bit wasn't so bad - it certainly wouldn't put me off going back, armed with your advice and the book Mrs Woffington recommended.

Loved - since, again, I can't leave messages there - your vivid prose about the Africa conference in Nice. A shame you had to mask that chiselled policeman...

Now that is more my speed. Lovely place. Looks so peaceful and relaxing.

Thank you, David; very pleased to hear you liked the post.
Yes! Gorgeous flic - those cheekbones ;-)!

Beautiful photos. Would you please contact us? We would like to inquire about including them on the Clonegal Castle section of our website with full credit and copyright reserved by you of course. Many thanks, and happy holidays!