The peony at Garsington 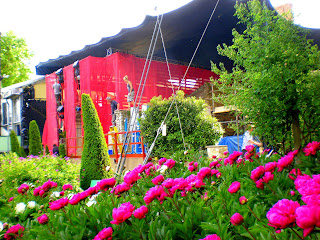 Armida's magic garden, at least in Martin Duncan's Ikeaish production of Rossini's opera which I've reviewed for The Arts Desk, can't compare with the real thing to the side of the Garsington stage. From the makeshift auditorium - coming down at the end of this season for the last time before the company is transplanted to the Wormsley Estate - you can glimpse the peony bed, current pride of Lady Ottoline Morrell's parterre (which is a glory in itself: 24 square beds cornered by Irish yews). I hadn't gone out of my way to see my favourite flower in its brief flourishing, for which Penshurst or Hidcote are perfect, so this was serendipity. Here the peony blooms en masse beneath the north wall. 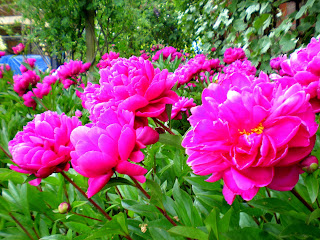 There are two varieties in this bed, both fitting into the herbaceous category (I've asked Clare Adams at Garsington to check with the gardener). 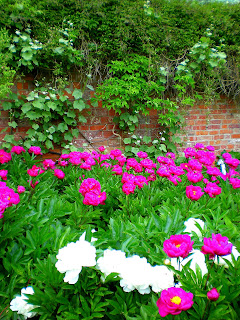 The glorious white, I think, is the Duchesse de Nemours 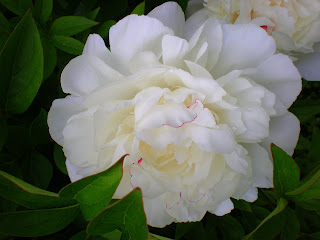 and a couple of beds to the south there are two more subspecies (identity TBC). 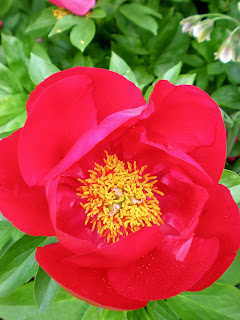 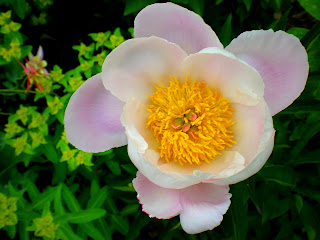 Passing regretfully over the roses trailing round the dovecote, I shouldn't overlook the poppies in another parterre bed. 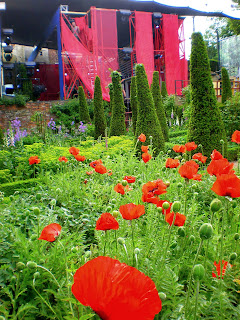 Of course nothing can quite compare with coming across a whole mountain valley of wild peonies, as we did in the Sibillini mountains of Italy some years ago now. But the flower's short life, the beauty of its shoots, leaves and buds, leave me fascinated. I wish I'd caught the yellow tree peony at Glyndebourne in its full glory. Here it was a little past its best.

For one awful moment I thought that the radical gardening scheme there had removed it altogether; it had simply been transplanted. But I'm not alone in deploring the relative nudity that's beset Glyndebourne over the past couple of years. Why remove the roses and the herbaceous profusion?

No such problems exist at Garsington, which just gets better all the time (or maybe it's because this is the first occasion where I've been there in the June high noon of gardens). Good news, Garsington General Director Anthony Whitworth-Jones told me, is that they're taking the head gardener with them to Wormsley, though she'll still be carrying on her stunning work at Garsington.

Will I miss this venue? Well, I've only been for four of the 22 seasons, and it was always a mixed experience. The braying nouveau-riche contingent used to be uncontrollable after their interval champers - the horribly overplayed production of Strauss's Intermezzo was the worst casualty - and still much of the talk which resounds over the lawns is of hedge funds and banks. But Garsington did provide one of the most essential and visually inventive productions I've seen, a real Strauss rarity - Die Liebe der Danae with the glorious Orla Boylan and Peter Coleman-Wright. Shan't forget its ballroom dancing queens or the motorway that led out to the Elizabethan garden. Ariadne was a messy horror, so I wasn't expecting much from the same director's Armida. But musically it had great moments, and I'm in danger of turning into a Rossinimaniac. I knew there was great music in Armida from the recently-reissued Sony recording, with a relatively young Renee Fleming in her prime 17 years ago and superb musical direction from Daniele Gatti. 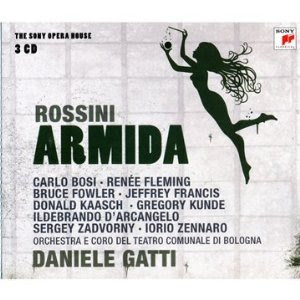 On Saturday, Bristol-born soprano Jessica Pratt wowed us all. But the tenors, good though two of them certainly were, didn't quite come up to the singular mark of the Chelsea Opera Group's find for Guillaume Tell, the achingly musical Mark Milhofer.
Posted by David at 10:09

Combined with your review on The Arts Desk, this post is an education in itself - not least for someone whose knowledge of horticulture is confined to (a) anything edible/potable, and (b)roses (and not much in either case). Yes, I know, I know ...
Never went to Garsington; longed to do so, now feel less peeved about it. But confess can't see the name without thinking of Aldous Huxley's 'Chrome Yellow', which does a brilliant 'Cold Comfort Farm' on the Bloomsburies (with a nod to T L Peacock).

Roses would be quite enough to last a lifetime - never having owned/had the space for any, I have to stick to what I know and can manage, mostly in pots (geraniums - the earthbound sort - scented pelargoniums, cistus and potentilla).

Must read Cold Comfort Farm. I wanted to call them by their proper name, 'Bloomsberries', in the opening para of the Arts Desk review, but thought that needed a bit of explaining.

Want to read Maria Edgworth's Castle Rackrent after coming across her intro in Alasdair Gray's brilliant Book of Prefaces - I imagine as a Peacockian you'll know her too?

Sorry, Minnie, didn't read very carefully. I did have an Aldous craze but I think that if I read Chrome Yellow, it drifted over me. I remember the essays better than the plots of most of the novels. Maybe I'll have another go.

Of course he hung around not far from your neck of the woods, didn't he? I fear Menton must be much changed since then. Love Sybille Bedford's descriptions of it too.

My late father (member of the British Rose Society as well as the RHS) would have agreed with you about roses.
DO read 'CCF': a comic masterpiece of rare invention & insight (+ aiming at targets you'll recognise). AH's novels mostly poor (with exception of 'Brave NW', which has proved prescient IMO; posted on it -vs- '1984' last year). Understand perfectly the '-berries' suffix temptation!
Maria Edgworth recommended too (have read only 'Castle R', tho').

Oh, I like that turn of phrase The braying nouveau-riche contingent used to be uncontrollable.

You do take very nice photos.

MINNIE IS TOO BRILLIANT

Please enlighten me about the nod to Peacock

CCF is a masterpiece, though how far readers today will see the satire I do not know

Garsington was indeed a centre for the Bloomsbury set. Lady Ottoline went to bed with Russell but found him too boney, so during congress she "concentrated on the fine mind". A pity. Not sensuous enough.In my experience when in bed, the boney with technique can be like bathing in honey.

Garsington was later the home of the historian John Wheeler-Bennett. Quite a man. Before the war (II) he dined regularly with Bruning,the Chancellor of Germany. Not something which could happen today. Can one wish that the Upper Classes were still in charge? (OK, OK Mr Nice )

These early houses like Garsington have no convenient rooms. Pokey

Reeling from all the information. You, too, Sir David, are a mine thereof.