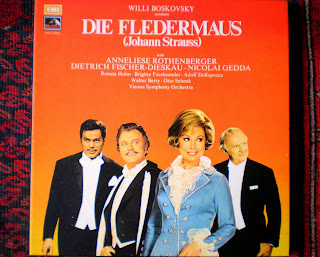 The death of German lyric soprano Anneliese Rothenberger at the age of 83 prompted memories of the first opera set I ever bought with my own pocket money (illustrated above, still in good nick; Rothenberger, of course, is leading lady Rosalinde). Maybe it's the only time I've truly enjoyed Die Fledermaus in any shape or form, and you couldn't get much more idiomatic than Willi Boskovsky conducting - though shame it wasn't the Vienna Phil rather than the second-fiddle Symphony - or a better cast than this one. There, too, are Fischer-Dieskau (with whom Rothenberger's biography in the booklet claims she shares equal fame abroad, ahem), Gedda, Fassbaender as a bull-dyke Orlofsky and the charming Renate Holm as Adele. The dialogue sparkles, the waltzes swoon.

Talking of which, here's Rothenberger playing Sophie to Sena Jurinac's Octavian in Paul Czinner's 1960 film of the later Strauss's Der Rosenkavalier conducted by Karajan. Few Sophies float 'Wie himmlische, nicht irdische' better (though of course the film is dubbed to a very fine soundtrack). One plus of focusing on the Rose Presentation and the excitement leading up to it is that you don't have to put up with Schwarzkopf's ueber-arch Marschallin.

Other than that, I dimly remember Rothenberger's recording with Previn of the Four Last Songs and a clip of her celebrated Lulu on a compilation EMI called The Enjoyment of Opera, but Rosenkav and Fledermaus, plus a mixed bag of operettas, perhaps remain the classic performances. Take a look at the Times obituary.

Been hearing a lot of hoary operatic classics, including a new-look Pearl Fishers at the Coli last night(photograph below of Hanan Alattar's Leila dreaming of Alfie Boe's Nadir by Catherine Ashmore) which I've just written up for The Arts Desk following a hugely pleasurable Chelsea Opera Guillaume Tell, all told more riveting throughout than the Glyndebourne Billy Budd. Vocally the Bizet was remarkable chiefly for the 'discovery' of Hawaiian baritone Quinn Kelsey. 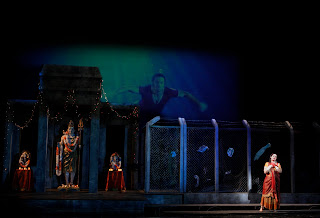 I also had a pleasurable wade through the latest batch of 20 Sony Opera House sets for the BBC Music Magazine. It was nice to have a hunch confirmed. The old Pagliacci has a great cast led by Domingo, Milnes and Caballe, but it was the panache of Nello Santi's conducting which took me by surprise. And there I was, backstage at the CBSO last Thursday, chatting with veteran ex-LPO, LSO and Royal Opera cellist Robert Truman who was guesting in Birmingham and had come to the talk; he confirmed that Santi was tops, equal only in his opinion to Tennstedt. This is a man who played Shostakovich 15 with the composer present at rehearsals and in the first UK performance of the Second Cello Concerto with Rostropovich. Robert also got under the feet of Fonteyn and Nureyev as well as the voices of Sutherland, Callas and Christoff. So he ought to know a thing or two.

Finally, apropos of nothing except a growing sense of horror and helplessness, up-to-the-minute bulletins on the Gaza peace flotilla outrage can be found here (this is a fridge note to myself as much as a notice to any readers). The bombing of the UNRWA warehouse which we saw dramatised only last week repeats itself, with what will surely be longer-term repercussions. And who knows where they'll end this time?
Posted by David at 10:30

You have written good things about the Zinman Mahler recordings, but what do you think of the Ivan Fischer recordings with the Budapest Festival Orchestra? I heard their recording of the Fourth Symphony and was mightily impressed.
Philip Warner, LSE

That was one I didn't get sent to review, Philip, and haven't yet heard. The Budapest strings are on the leanish side in Mahler for me, but I adore most of what IF does. And it really is an 'orchestra with a voice', as Gergiev once said to me of Svetlanov's USSR/Russian State Orchestra.

What I HAVE just been bowled over by, at least in the first movement, is Salonen's Philharmonia Mahler Nine.

Sorry, Philip, quite forget in the recent wave of Mahler discs - I've covered about a dozen - that the absolute top of the pile was Nott and Bambergers in the Resurrection. Rock bottom, the infamous Norrington Ninth. More I'd better not say or I pre-empt publication.

I was on my way to make my latest comment in the _Meistersinger_ thread, and came upon this. This may seem like a small, picky point to you, but, thinking I ought to have a _Fledermaus_, and based on Herr Boskovsky's reputation, I bought his, but was soon put off by reading that, it would appear, the dialogue was rewritten or at least revised. I have yet to listen to it complete, and further wonder if whatever revisions that were made impact upon the story, as some in _Die_ _Lustige_ _Witwe_ can to a degree. Something I have been wishing to do is to hear a complete and _COMPLETELY_-unaltered as per text, performance of both the _Widow_ and Weber's _Der_ _Freischutz_, possibly now adding _Fledermaus_!

As for mahler, I wish that the recent _CD_-_Review_ on him had pitted the Norrington _Nine_ against one of Herr Walter's, preferably the first one from the 30's, particularly as per tempi and approach to string vibrato. The _Ninth_ should probably be my next Mahler, and I would like to keep the Norrington in the running for a while longer, only throwing it aside if it can be shown to run contrary to Mahler's overall wishes, which I am prepared to conceed that it might if necessary. My other two current contenders would be one of the Walters, again probably the earlier, and, due to his reputed thoroughness, Maestro Benjamin Zander's. _Eight_ at the moment is probably between the classic Solti and, given its good reception on that feature, this new Tilson-Thomas.

p.s. It sounded as if Maestro Tilson-Thomas's _Eight_ has first and second violins seated antiphonally, a point in its favour for me, whereas I think the Solti would not have that.

Not great literature, is it; not a very subtle story. I feel differently about Schikaneder's text for Zauberflote, which I was glad to hear at least once in its entirety.

A few minutes' comparison between Norrington and Walter Mark One would convince you that this non-vibrato rule is a nonsense. And by now it's so old hat. Actually I've kept a couple of minutes of the finale to play to anyone who doubts that it can sound so bad.

I have been remiss in not replying here sooner!

Though regretably not word-complete, I think the Telarc _Zauberflote_ gets things as right as possible in a cut version, unless I am missing others which are even-more complete. Hoping I am not repeating, I think a telling passagge is the one in which the ladies are telling Tamino about the capture of Pamina, and add a bit more detail than is usually done in my experience, about it having been done on a day in May, etc. Their _Fidelio_ seems similarly-comprehensive, though admittedly there is an omitted passage between "O Namenlose Freude" and the next scene which covers ground re-covered during said Finale. (Unless it occurs during the dialogue _BEFORE_ that duet, a further description of how Leonore disguised herself as a man, etc.)

I listened to brief clips of Maestro Walter's VPO Mahler _Nine_, and, in what I heard, vibrato was indeed sparing, only showing just a bit at passionate moments. Elgar's string players used it sparingly at most, even the winds, apart from Mr. L. Goossens, who, as I may have written here previously and you probably know, Elgar liked much.

p.s. It occurred to me yesterday that _MAYBE_ the problem with you getting that Order of Service to me was a stupid omission of "U. S. A." from my address. Yet I re-checked, and it is indeed there, and the rest was correct as well (unless I accidentally added a second l to "Belmont," thus making it errantly "Bellmont."