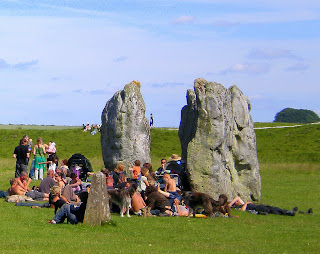 Being driven back in smooth style the day after reeling joyously from the longest celebration of Midsummer in all opera, we were drawn as if magnetically to the standing stones of Avebury. Of course it didn't take us long to realise that the opposing forces of then-genial police and ruddy travellers with their cohorts of dogs and children in tow had gathered to celebrate the solstice. A little further on, beyond Marlborough before joining the mundane motorway, we saw this very midsummery down covered in poppies. 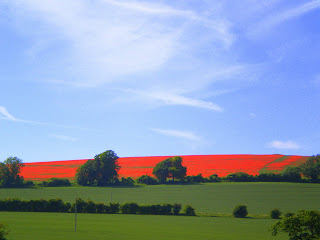 St John's eve and day, the Johannisnacht and -tag which see chaos incorporated into order in Wagner's 16th century Nuremberg, are of course slightly later - 23/4 June rather than the longest day of the year, the 21st - but it comes to much the same thing. I never thought to see a Meistersinger with a Hans Sachs as great as Norman Bailey, possibly the most remarkable performance I've ever seen on a stage, but Bryn, essaying the role in its entirety for the first time with Welsh National Opera in Cardiff, certainly was, in his own very different way. The result of spending ten weeks on this Meisterwerk with my City Lit students rubbed off in a review as long as a dissertation for The Arts Desk. I make no apology.

On the way back we made a return visit to stay over at the dreamlike house of one of our companions in Lacock. I've dealt with it before here, but that wasn't midsummer, so the gardens were at their peak this time. We went back to Lacock Abbey for the benefit of our fourth friend, and Deborah and I wandered in the fairly new botanical zone, not a patch on hers but at least boasting a gorgeous liriodendron or tulip tree in flower. 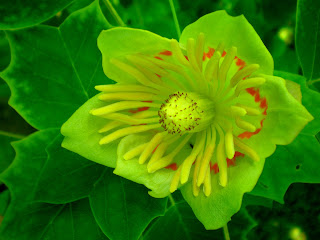 Idyllic lunch followed. The usual strawberries are of course in season 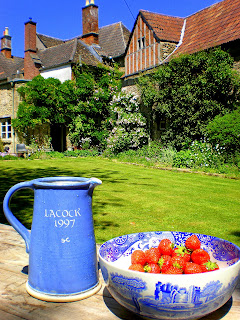 but have you tasted the little white ones? Deborah has a whole carpet of them in her garden, and she duly gathered the latest crop. They're much like the pink wild strawberries, but they do look rather different: 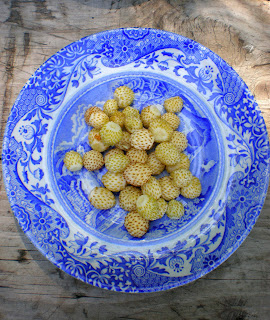 And now it's head down to get the script for my Building a Library on Delibes's effervescent Coppelia ready for Radio 3's CD Review. As I stepped in at the last minute, it's being recorded just before the broadcast on Saturday. I adore the work more than ever, but I've had to sacrifice other pleasures to get on with the task, including tonight's Royal Opera first night for the new Laurent Pelly production of Massenet's Manon. The hedonist with a heart is to be embodied by her glitzy alter ego, Anna Netrebko. Never mind, I've had my vision for the week, month, year with that Meistersinger.
Posted by David at 20:01

My favorite Delibes ballet is Sylvia. There's a striding confidence about it that I find massively appealing.

The Metropolitan dies not have a satisfactory Manon production. It's an ancient Ponnelle affair that is all over the map stylistically.

The finest set in it is the Hotel Transylvanie, a brilliant two level/four room affair in black, white, crystal and silver. Act one is a flat painted 19th century affair with painted cut-out chickens mounted on springs. SO bizarre. Act Two is a garret right out of La Boheme; the Cours La Reine is more or less realistic but has no profile; St. Sulpice is back to the 19th century and the final scene is a realistic garbage dump featuring props from all the previous scenes, onto which des Grieux drops Manon's body after she dies and he goes on to other experiences. I hope the one you're going to is vastly better.

Sylvia was the one I chose, but there aren't enough complete recordings of it. I grew up with the Bonynge and adore it. The Royal Ballet DVD is gripping - not one but two sexy men (Bolle and Soares). How times have changed since it was put on as an excuse for the Jockey Club to ogle the ladies' legs.

Sadly my point was that I'm NOT going to Manon - my colleague Igor on The Arts Desk stepped in at the last minute and should have some fun with it. The production's by Laurent Pelly but an undiplomatic web review of the dress rehearsal claimed there were no sets as such.

Ah, it's the Solstice that really counts! Next main event is Lughnasa, of course (shall expect something Joycean from you then ;-)).
Lovely piece as always. So enjoyed Avebury and Lacock (two of my favourite places), and read with great interest your earlier piece about Brissle (a local journo once described it to me rather well as "a small city with a big attitude") and points east.
Now thoroughly entranced by murals, maquettes and the thought of new prod'n of Manon. But sorry you missed the opera. Anna Netrebko? Hm; but then she does have excellent taste in men ...
Oh, and David: apologies most definitely NOT in order for disquisition on TAD - superb reading, thank you.

I think colleague Igor may have hit the nail on the head re Manon over on The Arts Desk - ie that Pelly demands total truth from all his performers - and got it from Dessay and Florez in Fille du regiment - while Trebs and Grigs (the flamboyant tenor who was charismatic but a bit off kilter in the Zurich Hoffmann I saw) aren't really about that. But I'm glad he loves the music - if Massenet were a symphonist, he'd be much more highly rated than he is as a fabricator of perfumed crowd-pleasers.

Saw broadcast of Pelly prod'n of 'La Fille du Régiment' with Dessay and Florez & see what you mean. Yes, definitely worked: was bowled over.

Agreed. I also think it would be a marvellous first-time opera for kids to see - not quite as witty as Gilbert and Sullivan, but gives a good taste of Italian bel canto with a smile.

When they hit adolescence, knock 'em for six with the Glyndebourne Jenufa.