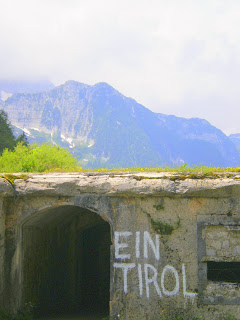 'If it rains, you can always go on a tour of the mine', said our Tarvisian hotelier when we asked about getting to Lake Raibl/Cave del Predil on our three-day excursion into the eastern Julian Alps from Trieste. I'd rather...etc, thought I, but having been to Cave, I'd say it would have been well worth it.

Yet the weather held and allowed us to do a full day's circuit above and around this beautiful Alpine lake. I was going to launch into a paean of the thousandfold flora around it, but as I reviewed the photos of our brief jaunt into Slovenia en route, I realised that both the mining village and the border crossing would need an entry to themselves.

So we took the morning bus from Tarvisio to Cave (as usual, there were only one or two other passengers, who sit at the front and glean or give all the gossip from/to the driver). Cave looked mighty grim, but it's beautifully situated and full of interest with its extraordinary history. 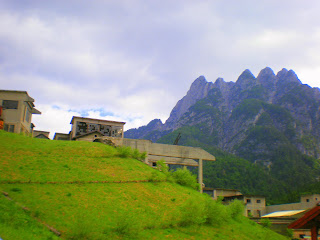 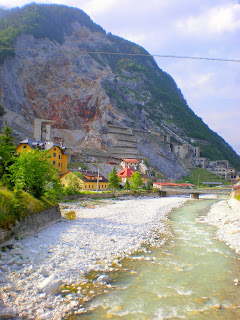 Mining of Monte Re for lead-zinc ore started here, they think, in Roman times but was certainly well established by the 11th century. The village of Raibl, as it was then called, sprang up between 1500 and 1800. At the peak of its operation in 1950 it employed about 1130 men. The notice outside the museum told us that here was a unique instance of Austrians, Italians and Slovenians all working together in complete harmony. It closed only in 1991, so I guess you have a very depressed population. Wouldn't have known it from the cheerful activity in the one of the two bars we liked best, run by one of those vivacious Italian women who presumably still know how to keep their men and seem very proud of it. Clearly the older of the bars, its walls are covered with trout from the lake 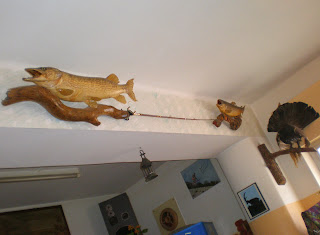 and photos of keen local as well as Udine mountaineers - these people clearly didn't ignore the nature around them. 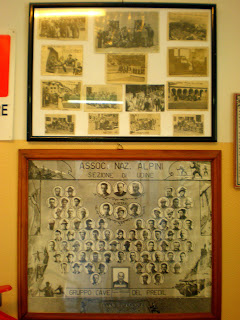 My pamphlet tells me that 'the continuous obsession for the cliffs originated the first organised Alpine Emergency Unit (Soccorso Alpino) in the valley as well as a group of the most skilled climbers in the area and the whole region'.

Our own trek was rather more modest, but took us higher than I'd anticipated. At a key point we looked back on the archetypally Dolomitic Cinque Punte which tower above Cave del Predil 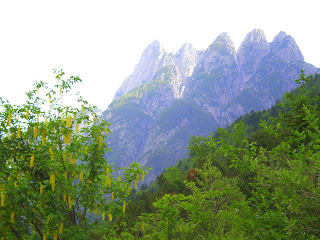 and then forward to the lake itself. 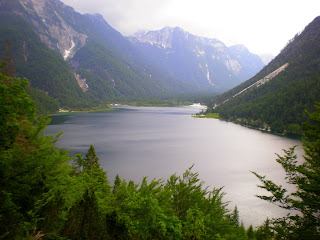 When we joined the upward-snaking road, I realised from the map that we really were as close as the path was going to take us to the Slovenian-Italian border, and that a diversion up the mostly empty highway before rejoining our forest route was well worth it. 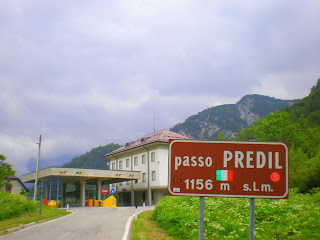 How exciting it was, for me as much as for the diplo-mate who was duly photographed in front of the signs but won't appear here, to walk across a deserted border crossing, and a moment of pride to see the European Union stars twinkling around the names of the two countries. 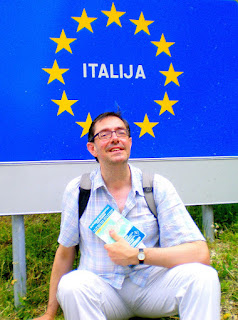 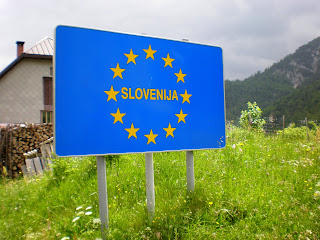 That's 'Italija' with a j from the Slovenian perspective. Across the Italians' own sign are more political stickers. 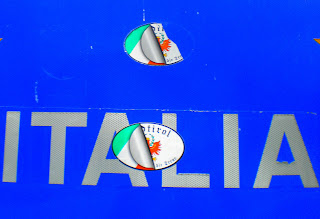 The crossing into the Triglav National Park had a special significance because we'd originally intended to split our holiday between Trieste and Bovec in the Socer vallery, where friends Stephen and Kate had recommended a very singular hotel. But connections between Italian and Slovenian transport seemed more or less non existent, so we'll explore the Triglav zone from Ljubljana in due course. Here, we could just have walked on and got to Bovec by nightfall. 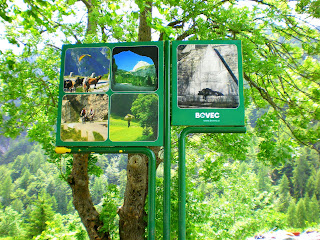 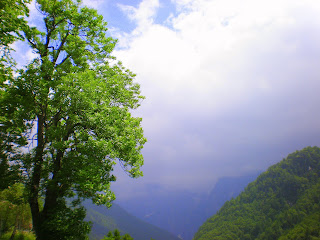 A cafe and a well-kept garden indicated habitation 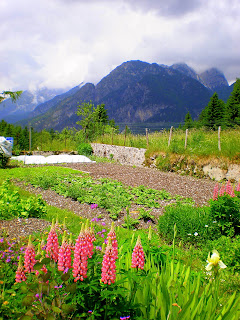 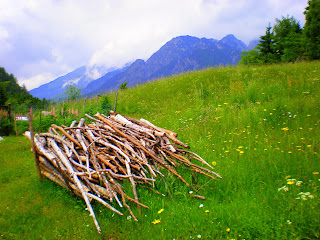 but there was no-one around. Anyway, we had a lake to see and a picnic to eat, and the rest of the walk was pure heaven. More on that in due course. I should, though, return to Cave, as we did at the end of our circular route, visiting the second bar for final refreshments before the bus back to Tarvisio and taking a look at the two churches, old and new. 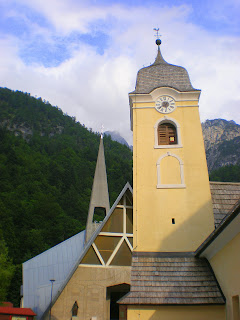 The newer one of solid, rather impressive construction, 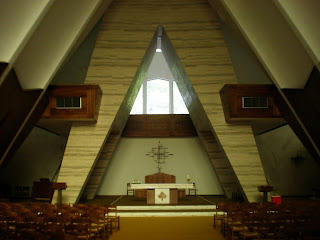 was apparently built because more miners and their families needed to worship than could be contained in the original. That has a pretty painted illusion of an organ 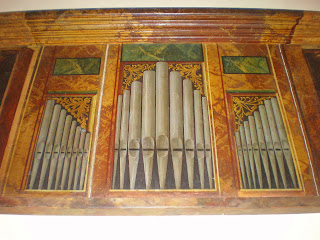 which is rather preferable to the two speaker boxes above left and right of the modern church's altar; and a pulpit with paintings of the evangelists. 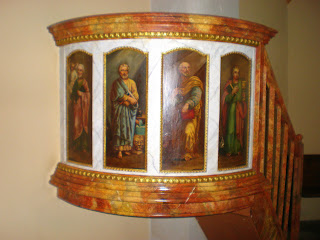 We liked Cave, if only because inevitably it has a more authentic feel than tarted-up but exceptionally pretty and well-situated Valbruna a valley or so to the west. But in the afternoon of that second excursion, the weather break-up finally hit and we spent four character-forming hours trudging down the mountainside in the pouring rain. At least we were rewarded at the end by the sight of these brightly coloured beehives. 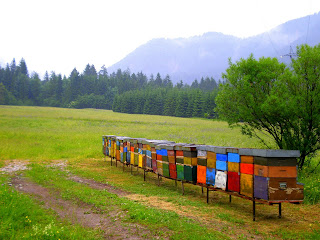 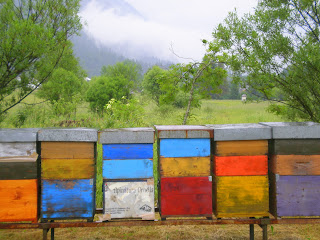 I like the part about trudging down in pouring rain.
Character forming for young people no doubt.

We cossetted oldsters, fresh from the comfort of your excellent recommendation Le Corderie, could also do with remembering what it was like to suffer under nature's slings and arrows. Getting out of soaked to the skin everything, having a hot shower and then enjoying a hearty meal were ample recompense.

What a heavenly place. Love the brightly-coloured beehives!

The trompe l'oeil organ is delightful.

I'm late in doing this, but thank you very much for recommending The Sacrifice, a very impressive piece of work and superbly performed.