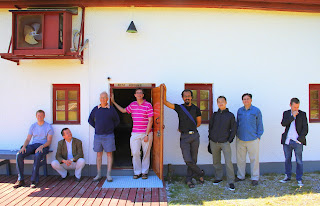 Again, apologies for the unproclaimed absence: I've been in Faro - really should start adopting the accents here, the nearest pronounciation we can get is 'Four-er' - the magic-scary Swedish island of Prospero Ingmar Bergman ever since he landed there in 1960 and decided to film Through a Glass Darkly on the coast near what would become his home.

To Four-er was invited a select 'delegation of international journalists' to observe and participate in the annual Bergman Week. And here we all are, a harmonious bunch of diverse temperaments, outside the Damba barn which served first as the studio for the interiors of Scenes from a Marriage and then became Bergman's private cinema. Can you imagine the awe and emotion of being a dozen or so spectators in the fifteen-seater, sinking into the chairs around the one with the cushion that must always be left empty - that of the Meister?

The assembled company, left to right, consists of Mike Goodridge (Screen International, London, lately the mag's LA man), Jan Brachmann (Berliner Zeitung, the chap to talk music with when film chat became a bit too arcane for me, an amateur in I hope the best sense), Gerald Peary (Boston Globe, genial old-school maker of a well-received documentary about American film critics), some creature in pink minding his head on the threshold of the sacred shrine, Satyen Bordoloi (Indo-Asian News Service, Mumbai, enthusiast and photo-taker extraordinaire), Li Hongyu (Southern Weekly, Beijing, and a tidy roommate in one of the campsite capsules they housed us in for the four days), Peter Rainer (NPR, LA, just assembling thirty years of film criticism into a book and big anecdotalist of time with the greats) and Roman Volobuev (Afisha Magazine, Moscow, brain and memory the size of a planet, chainsmoker, individualist and a former colleague of Anna Politkovskaya, of whom he had some revealing things to say).

Lest you think that the man who made About All These Women would have been sorely disappointed by the all-male clan, we did have feminine company in the shape of the smiley Kajsa Guterstam, International Project Manager of the Swedish Institute, and the fabulously informative Pia Lundberg, Head of the International Department of the Swedish Film Institute, who chose the four new Swedish films we had the privilege of seeing in advance screenings in the private cinema. There were also the very emotional and truthful Liv Ullmann, who hadn't been back to the island since Bergman's death three years ago, and the daughter she had with IB, the novelist Linn Ullmann (I'm looking forward to reading A Blessed Child, which has more than a little of the Faro flavour about it, she told us). Anyway, here Pia and Kajsa join the throng along with Trutz von Ahlefeld, another genial guide around an island he knows well. 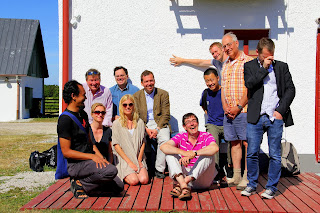 No time to download the bulk of my own pics yet, but I must just stick in two to show the extremes of this island, so mediterranean in parts in high summer but with the potential for the ultimate bleakness, the isle of death as IB once called it. The south and west coasts are mostly like this, with viper's bugloss purple-blueing the landscape: 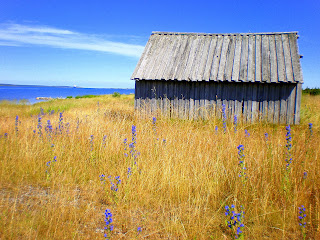 while the north-west coast is lined with rauks - sea stacks - and pebbly beaches with fossilised coral in the stones. They tell us Faro broke away from Africa, hard as that may be to believe, and this is the result. 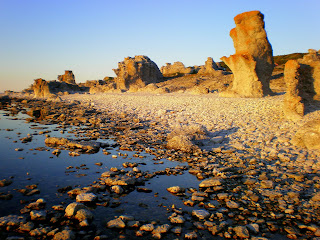 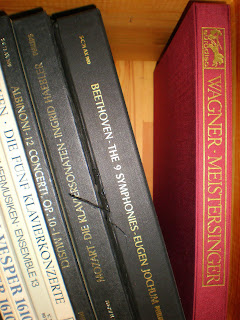 Inevitably an important work for a creator who knew that nothing vital comes about without a touch of Wahn to prompt it.
Posted by David at 08:17

Glad to see you back, David, as must confess to having been unquiet (withdrawal symptoms no doubt!). So here's a cheer: hooray! And another couple for good measure: 'youpi! Youpi!'
What a wonderful excursion - long to hear more. ('Wild Strawberries' and 'The Seventh Seal' are among my favourite films, so wonder if Faro was used as a location in either/both cases.) What amazingly stimulating company you had, too. Great pix, as ever. Looking forward to catching up with you on TAD soon.

And thank you, Minnie, for your prompt welcome back. IB didn't come to Faro until 1960, when he was looking for a setting for Through a Glass Darkly, had wanted Orkney but fell in love when he was shown here. Then came Persona, Shame, Scenes from a Marriage and A Passion (or The Passion of Anna). All bleak if occasionally hopeful landscapes as metaphors of the soul. And now we've seen all the locations!

I gather David was bitten to death by mosquitoes.

David was Faro used as the location for the idyllis My Summer with Monika?

Worse: horseflies - evil big lumps on the ankles dispelled at last by arnica pills. But you have to suffer at least a bit on Bergman island.

The idyllic bit of Summer with Monika was shot on an island closer to Stockholm in that archipelago.