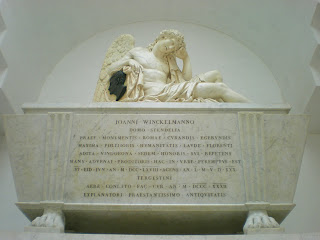 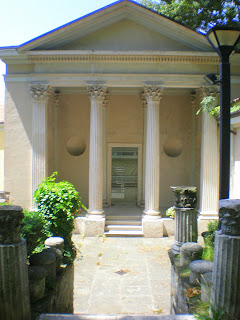 in its Lapidary Garden. 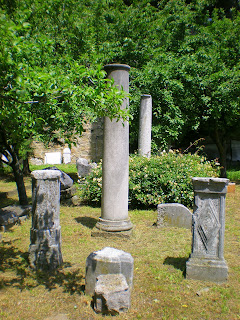 So what does Johann Winckelmann mean to me? Really not much more than a name, somewhat mocked in Richard Jenkyns's The Victorians and Ancient Greece for his dogged insistence that Greek art was all 'noble simplicity and calm grandeur' and his 'peeping Tom' view of the original Athenian gymnasiums with their naked youths as an education in 'the beauty of forms'. Walter Pater pinpointed Winckelmann's partial view when he declared that 'the eye is fixed on the sharp, bright edge of high Hellenic culture, but loses sight of the sombre world against which it strikes.'

Alas for Winckelmann, the 'sombre world' did for him after only eight days in Trieste, when the young Italian he'd taken up with murdered him. Troubled rent-boy or thief pure and simple? We'll never know, though Winckelmann's homoerotic dithyrambs sugges the former. Anyway, according to Jan Morris in my current bible, 'all educated Europe, we are told, was saddened by the news of his death - "universal mourning and lamentation", Goethe wrote'. The cenatoph, Morris adds, was 'erected under the patronage of an emperor, three kings and a grand duke, 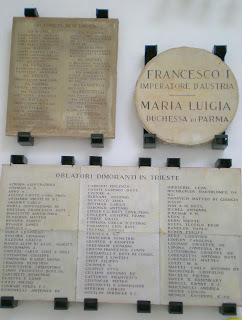 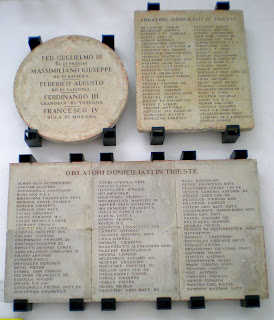 containing a fine marble image of Dr Winckelmann and sundry examples of the busts, torsos, thoughtful muses and fragrant heroes of his enthusiasms'. Eheu, fugaces. 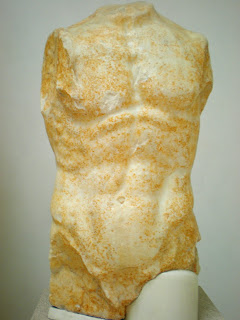 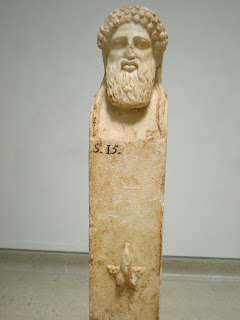 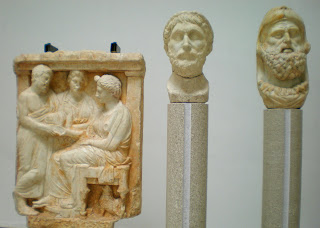 There are some fine sculptural fragments around the Lapidary Garden, too, including this fragment, one of three from the nearby site of Aquileia which we must visit next time. 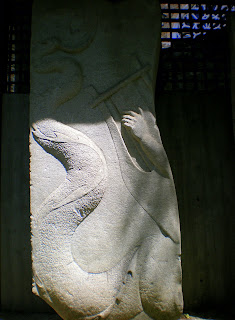 And the Museum proper is charming, obviously benefitting from a recent injection of cash and proud of the Egyptian collection assembled by a couple of distinguished Triestine archaeologists. It's not at odds with the memorial strain here to feature four very handsome canopic jars, those mysterious god-as-animal-headed containers for the intestines: 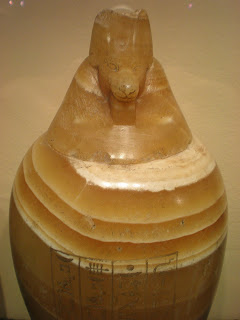 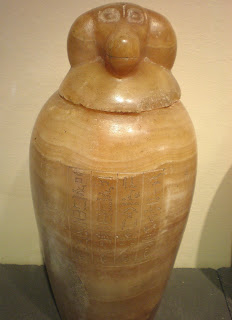 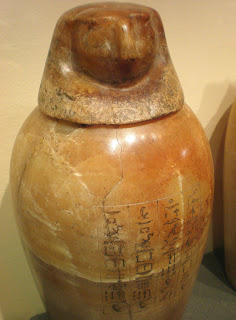 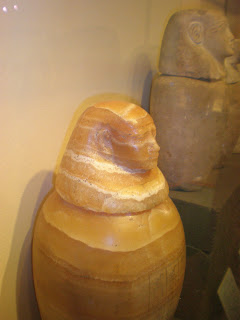 All these pictures: maybe we need Debussy's 'Canope' from the second book of Preludes to absorb them by. I'd choose Zimerman if pressed, but as I have his Preludes on the shelves, let's hear great Gieseking.

By pure serendipity, I've just discovered that 'Canope' is also among the selected preludes on a 1967 Richter recital disc for which I'm just about to write the notes. And apart from the Festival Hall hackers and coughers, it's spellbinding.

Just two more items from an absorbing collection, which we didn't have time enough to see at length before the museum shut at noon. Here's the rim of a funeral jar from one of the prehistoric sites of the local Castellieri civilization up in the karst 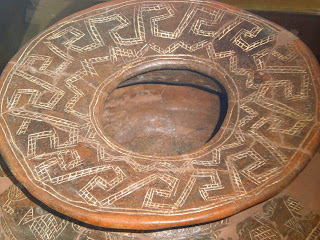 and the museum's real treasure, though not from around here: a fifth century BC rhyton from Tarentum. 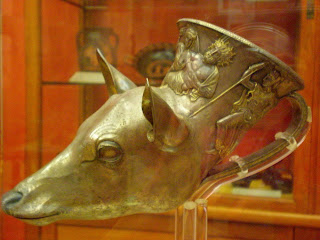 All these aides memoires I needed, by the way, because they didn't have any postcards, and even the guide book was sold out. A shame: it's a wonderful little museum and I'd like to have known more about its collectors.
Posted by David at 12:56

See W in my A to Z of German Jazz for another member of the family!

Absolutely fascinating tour, with appropriately sombre musical accompaniment. Knew a little about Winckelmann thanks to a work on Greek Classical Sculpture on paternal bookshelves, so it has been a rare pleasuer to learn more.
Love those Egyptian urns; oddly, there's something rather warm and inviting about them ...

Off topic, but have you heard that Mr. Anthony Rolfe-Johnson has now also left us? He was another singer I admired, and, of course, collaborated with the late Sir Charles on _Fidelio_ and _The_ _Mikado_ at least. The only Britten in which I have him is _St._ _Nicolas_, though I understand him to have been quite a formidable Britten singer. I only heard him live once, in Prom 1 of 1985, participating in a star-studded performance of the Mozart arrangement of _Messiah_, Miss Horne and Mr. Ramey having been two of the other singers I seem to recall. I thought he was a fine Handelian too, and the one performance I think I treasure most is of "Gentle Airs" in the Hogwood recording of _Athalia_.

I agree about the Egyptian urns -- there is something very personal about them.

Should you ever visit Verona, The Church of Sant'Anastasia has a Fregoso chapel -- burial place of several of my ancestors.

Agreed, both: the material is so warm for a start - I'm wanting to say alabaster, forgive me if I'm wrong - and not at all monumental or even mysterious like the Debussy. Maybe he'd seen bigger ones of different stone. I suppose there must BE some in the British Museum - I should go and hunt them out next time.

Is there something distinguished about the Fregoso Chapel I've missed - apart from it being the tomba degli avi?

That 'both' was to Minnie and Will. Yes, JV, I heard the sad news from Peter Rose. Will do something brief now.

Tomba degli avi miei, indeed. No, it's not one of the great Renaissance chapels by any means, but a dignified plaqce with the family crest set into the floor in marble (I know this from photographs students of mine brought back from a trip they took to Italy).

We had a number of Doges of Genoa, several Boccanegraesque sea captains and a Federigo Cardinal Fregosi (1480-1541) is one of the four conversants in The Book of the Courtier by Castiglione, a good friend and intimate of the Cardinal, many of whose letters and other writings were in Castiglione's library.

I am not certain of how many family members are interred in the chapel. Fregiso was the singular form of the name which is now used in the plural, Fregosi.

Yes, forgot to add you were right in thinking the urns to be of alabaster, David. There are some lovely examples of similar in the BM.

I'd love to use your photos of the four canopic jars in a talk and paper I'm preparing for a student Egyptology research group. It's about a particular Egyptian personal name and how it evolves through time.

The owner of those canopic jars is one of the Late Period women who bore this name (Cia-en-heb is how the Italians render it, Tja-en-heb is closer for English-speakers). She is the subject of a seminar (in Italian) video-recorded at https://www.youtube.com/watch?v=BDXBO7OOpiU , in case you are interested.

I'll credit you fully and assert your rights over the photos. When the project is complete (some months away yet), I'll put a copy of the paper on my page at Academia.edu and send you the link.

I'd be honoured, Lloyd - all part of the interesting directions which posts can take. I'd be very interested to know more in time, and I'll follow up your link. All best wishes for the talk and paper.