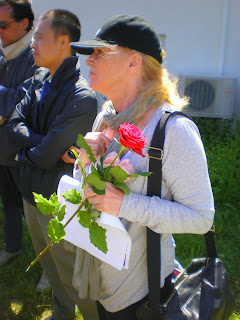 Finally put up my official thoughts about Prospero Bergman's enchanted island as one of the Arts Desk's Sunday 'letters from...'. Still, there's much more to add. Reassuring the Triestophiles among you that I haven't given up on the Winckelmann or James Joyce entries I promised, I'd better stagger the Fårö afterthoughts too. Note that for once I've bothered with the accents: it really is important to see that it might be pronounced 'Four-er'.

Liv Ullmann came across as a warm and spontaneous human being, crying with a kind of bittersweet happiness about the miracle of being back for the first time since the funeral. Here's the gravestone for the burial-place Ingmar shares with his wife (no relation to the great actress who starred alongside Liv in his Autumn Sonata). It's in a quiet corner of Fårö Church, furthest from both the road and the sea, and fronted by a crazy-paving sweep expressly against the greensward surrounding the master requested. 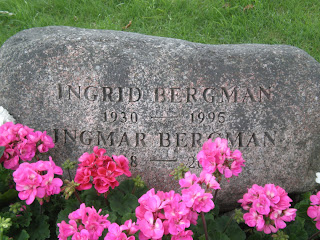 After the question and answer session with Jannike Ahlund, Ullmann came out the back to speak to the Magnificent Eight, as one of my fellow critics dubbed us (there's my roommate Li standing next to her in the top shot. Shame it doesn't catch her bright blue eyes - there's a better head shot by the official photographer in the TAD piece). I did film her talking about how the scene with the broken glass in Persona wasn't premeditated; nor was the iconic shot of hers and Bibi's faces joining together. Both came about by accident. Stupidly, I shot the little speech in portrait format on my camera, and forgot that films, unlike stills, can't be turned round. Still, I have that little piece of history to treasure and hope we can revisit the interview proper (which was professionally filmed).

Should add just a bit more about the private cinema, too, as not all the photos I wanted could be accommodated in the TAD piece. Here's Liv and Ingmar's daughter Linn talking outside it about her childhood, and how they'd all meet at 3pm and sit on the bench by which she's standing: 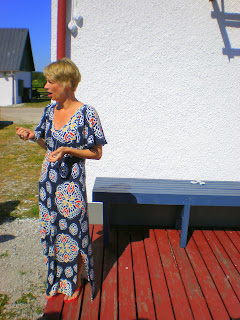 And, since she recalled the premiere screening of The Magic Flute - which was edited in the room above the 15-seater, here's the only adornment in the cinema, which seems so modern (and in fact was opened to a very select public when we were there for the first time). It's a rather marvellous tapestry by Anita Grede, depicting characters from the opera against the background of Fårö scenes. 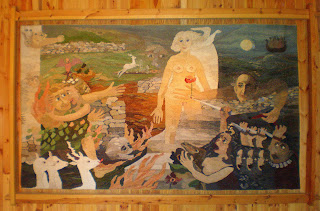 Some of the film's people, especially the Queen of the Night, the Three Ladies and Monostatos, are represented as we see them in the film. But there, of course, is Bergman himself playing Sarastro with the magic flute. 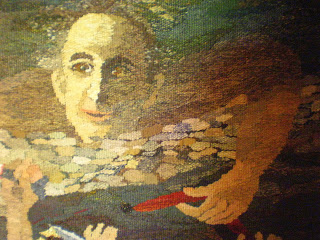 I've just begun Linn's novel A Blessed Child, by the way, partly based on her relationship with her father and the island (dimly veiled as 'Hammarsö' - Hammars is where Bergman's house is situated). It's written with a poetic simplicity that must be well reflected in Sarah Death's translation from the Norwegian. 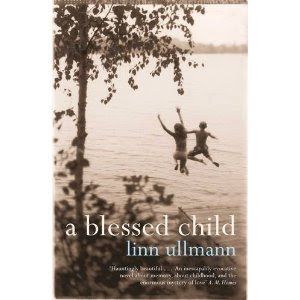 And that will have to do for now. There were so many stills I wanted to use of scenes and rehearsals for the Fårö five - Through a Glass Darkly, Persona, Scenes from a Marriage, Shame and The Passion of Anna - but since Swedish Film International demanded $200 a shot, that just wasn't possible. Next time, we'll have a look at a few places NOT associated with Ingmar on Fårö.
Posted by David at 13:07

Loved your piece on Fårö in TAD, so delighted to hear and see more. Liv Ullmann much as I might have expected - and still luminously lovely. Suspect Bergman would have been more Sarastro than Tamino. Have been meaning to read Linn's novel for ages; now you've provided more urgent incentive.
Magic spot, and it does sound as if you've done it justice.

Yes, Minnie, I thought Sarastro too, but since he's holding the flute he is the enchanter (and the flute, of course, comes from the Queen).

Loved your latest paean of faith in humankind. The patisserie does sound fun and friendly.

Lucky fellow David, thank you for this very nice entry.

In this instance, Laurent, I know I'm lucky; to sit in that cinema behind the empty chair will be one of the best memories of my life.

And I was lucky last year to meet Anderssons Harriet AND Benny. Though the real whammy was back in the early 1990s when Liv, Harriet, Bibi and Gunnel all appeared in the same Barbican gathering (not that I met any of them face to face, but I got a lively sense of them as splendid human beings).

Hello David. Wonderful blog and pictures. I was wondering if I could use your picture of Bergman's headstone for our YouTube series Breaking Down Bergman (http://www.youtube.com/breakingdownfilms).

I recently interviewed the woman who helped establish the Bergman Center and she talked about his grave site briefly and I think it would be great to have a picture, since I didn't have a chance to visit when I was in Sweden. If you can email me at davidjamesfriend at gmail dot com that would be appreciated.