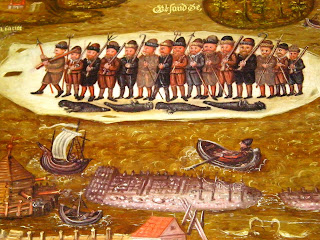 Or nearly. Because of course Bergman husband and wife are buried in Fårö churchyard, and I guess he must have gone there often before he was buried in his state-of-the-art coffin (he wanted one just like Pope John Paul's, apparently; so much for Calvinist austerity). But quite independent of the Ingmar topology is this marvellous kutatavlan or seal hunter painting ('kut' is Fåröese dialect for 'seal'), one of two on the church's north wall.

In the winter of 1603 15 seal hunters found that the ice floe they were standing on was drifting out to sea. Three reached land at Gotska Sandön, while the others took 14 days to turn up somewhere on the Swedish archipelago. As a thanksgiving, they had this picture made, which shows them in their Sunday best with hunting equipment as well as the oldest known image of Visborg Castle in Visby. A poem beneath in rhyming Danish tells the story of their hardship, living off nothing but raw seal meat and battered by snowstorms.

The poem is reproduced in a book on the Gotlandic journey of Carl von Linne, aka Linnaeus. On 29 June 1741 he set out with his team of fellow researchers on a day's excursion around the east of Fårö, noting down marram and other plants and observing local customs like catching seabirds with snares. The heat was so intense that they sought shade beneath the then already very large oak on the farm at Ava. 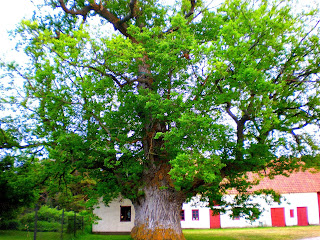 Linnaeus measured the circumference - 4.2 metres at waist height - and noted that on the nearby fence was hanging a net for seal-hunting made of treble twine. Lichen grew on some of the walls. Linnaeus noted its use as yellow dye for cloth. I walked there on my evening off from the screening of Smiles of a Summer Night in Sudersand cinema. The heavenly circuit took me inland through woods 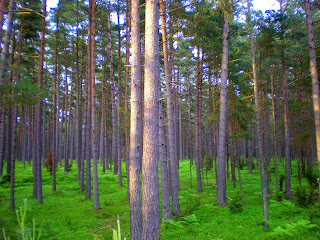 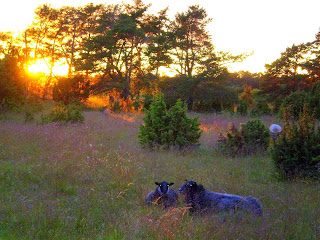 and pines on fire in the sunset 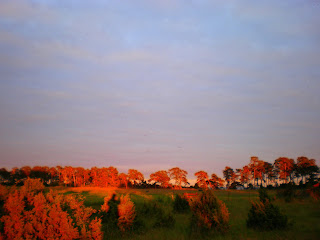 before heading back along the shore against very intense, 11pmish skies (hence those treasurable images reproduced below and over at TAD). Even though I was wearing shoes and socks, and had plastered face and arms with tropical insect repellent, mosquitoes and horseflies got at my ankles in a big way, as I discovered painfully over the next few days. You need to do some penance in paradise, especially if it's Bergman's ambivalent haven. And I know, I know, I should see it in the winter when all colour drains from the scene.

But back to the midday summer sun which brought out Ingmar's demons, and our first lunch at Kutens Bensin. There's a connection, of course, with the film world - the Creperie Tati serves up such specialities as the Marilyn and the Miss Taylor - but this is a world unto itself. 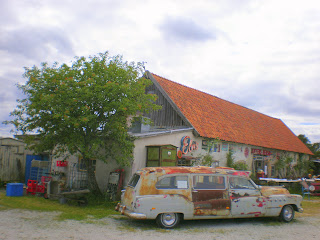 The vigorous owner, whom I can only call Thomas as he prefers to remain anonymous on the place's very idiosyncratic website, came out to tell us all about the stars of the rock and folk world who've played in his barn. 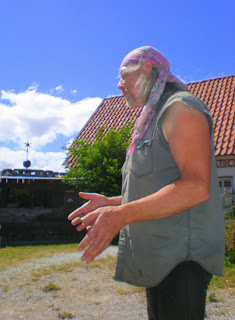 His daughter, who lived in France for many years and studied with a cordon bleu chef, served up lunches with sensational baking during our hours spent in the private cinema. And anyway, even if the food weren't up to much, you'd be happy to sit there for hours admiring the rusty old cars and fridges. 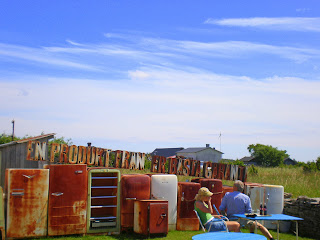 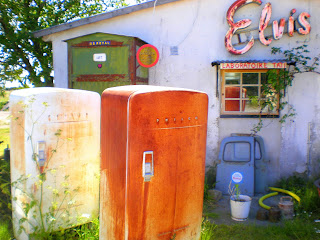 One man I know would love it is our friend Paul Beecham, stage manager of the Quentin Follies and former ENO backstage doyen. So ending with a shot of him at the revels Saturday before last should lead you back to the extravaganza below. 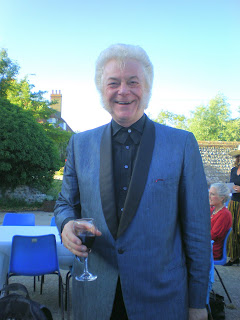 Strictly speaking, that belongs to the 'Bergman on death' entry - all that stuff about never seeing Ingrid again, and meeting her on the other side: I was struck at the time by what a great Orfeo ed Euridice he might have directed.

Of course you are right in logic. And doesn't the original myth ( or one version of it) NOT include the revival of Euridice ? But I could not resist the pun