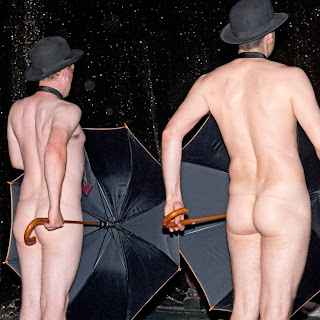 Yes, it's changed since my performing day when the half-amateur, village-institute feel was supposed to be a hangover from the days when Quentin Bell and family put on panto and cabaret. Now burlesque from Brighton and elsewhere has hit Firle even harder than the travellers who caused such an ungenteel stir a few years ago. This year the Quentin Follies in the barn at Charleston was (were?) 90 per cent professional high quality. These boys from Der Wunderlich Revue with their cheeky Bradford and Bingley routine certainly added variety. The three pictures of the acts I've included were taken for Charleston by Axel Hesslenberg.

I've written a bit about it already in the Buzz section of The Arts Desk, without passing critical judgment, and I'll use that only to praise here, too. But first, the circumstances: a blissful July late afternoon and evening, with breezes to chill but not freeze the air and eau de vache to perfume the air from outside the barn (a few supernatural moos punctuated novelist Andrew O'Hagan's recitation of Burns's Tam o'Shanter, too, which was all to the good. 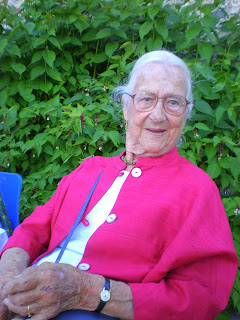 Ever since she rose from her supposed deathbed and proved that rumours of an inoperable brain tumour were not so much exaggerated as completely wrong, I've been more delighted than ever to see Quentin's splendid widow Olivier - possessor of the sensible streak in the Bloomsbury mayhem which she passed on to daughters Cressida and Virginia. Not bad for 94, eh? And here's our dear friend Cressie-poo, as Sophie will annoy her by calling her, sporting natty jewellery as doyenne of the festivities, carrying on her father's fun work in what would have been his 100th birthday year. 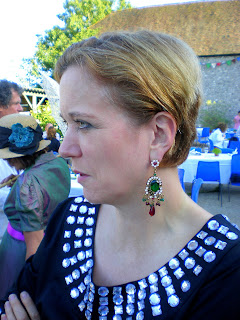 Everything in the Charleston garden is blooming. The noble but spontaneous hollyhock would seem to be the Bloomsbury symbol of current choice: 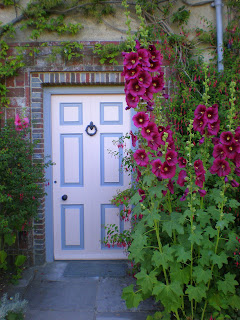 and here are two shots of shots of house, wall and downs. 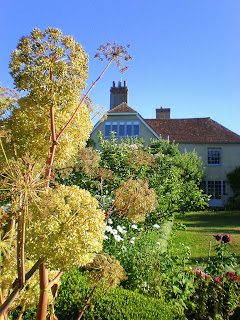 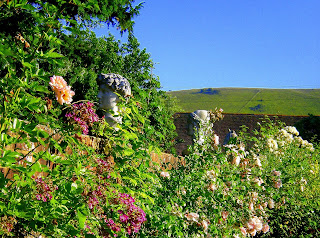 As for the show, I've done a run-through on TAD, and there were certainly highlights towards the end. But nothing could have been better, as far as I was concerned, than the little sequence minutes in. It began with sheer charm - a scene from Susanna Waters's adaptation of Daisy Ashford's infant-phenomenal novel The Young Visiters [sic], in which Susanna and Richard Hahlo dealt with ingenious props and scenery. 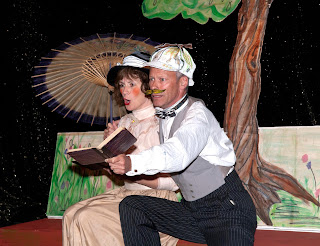 I might have been in a minority delighting in every word of Tam o'Shanter (prefaced by consummate and, yes, even beautiful bagpipes), but I don't care. And, finally for now, a certain drag/falsetto Dido, an image of whom I am permitted to include here if I say no more. Goddaughter Evi's comment: 'what a lovely lady!' 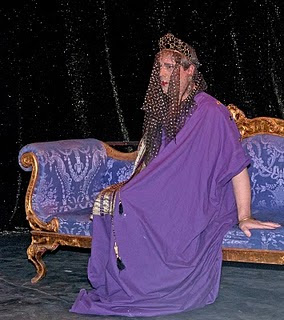 Weimar Republic Kabarett meets (end of the?) Pally Pier: wonderful! Enchanting setting, keen cast and punters (La gente paga, e rider qua - indeed)... all that, and sunshine too: blessings galore. QB of same vintage as my own dear, departed Da, BTW.
That's a splendid Dido - looking decidedly glum, as well she might (thinks, 'all that stuff mother used to warn me about: true, the whole lot ... curse, chizchizchiz.')

Tragic, legs together - that's what we like. Makeup by consummate Cypriot Niki Katsaouni (did nothing for me, I hasten to add - there won't be any lady-roleplay going on around here).