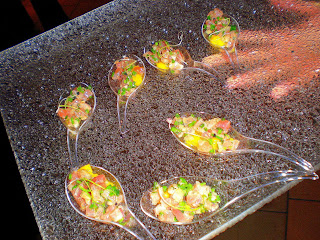 No. it wasn't all lotus eating. For the most part I kept myself to myself, stocked up on delicious local produce and fresh bread in my self-catering flat (the second, after I'd moaned about the dark, viewless first, just perfect) and missed a couple of banquets because of my devotion to late-night Leonskaja after the main concerts of the evening.

Bit of a pity, that, on my second night, because there was a big do out at a restaurant near the golf course. I arrived at 11.40pm, delirious from Leonskaja's Schubert D850, just in time to find the only folk I actually knew on the point of departure. The food was finished, but not all the distinguished guests had gone. As Bashmet, Maisky and other familiar faces flitted past, I saw the divine Anne Sofie von Otter (pictured below for the Verbier Festival by Nicolas Brodard singing the ballad of Faure's Melisande in that evening's concert) and wanted to tell her how much her tribute to Anthony Rolfe Johnson had meant. Yes, she said, so many famous losses already this year, and several others close to her. And we talked a bit about Tony's warm and ever-helpful collegiality. 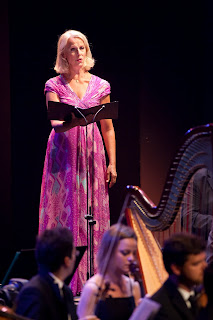 Spoke to that romantic young cellist Andreas Brantelid about the morning's Debussy trio revelation. Also saw Bengt Forsberg, and wanted to press the flesh after that totally individual recital he'd given at the Wigmore. Never met a friendlier artist. He was there with his daughter, and told her delightedly I was the one who'd given him that review, and how I'd understood his intentions. I pressed the Grainger celebrations idea next year on him, and quick as a flash he came up with the relevant Percy dates.

So there was talk if nothing more than a cream eclair to go with it. Earlier, at least, some of us had enjoyed a sumptuous reception at the simple but obviously first-rate Grange Hotel where I chatted with the delightful Laurence from the tourist office about Edinburgh, where she'd au paired in days gone by. Dvora and Michael Lewis and I agreed that the above tuna and mango spoons and all the other bonne bouches were the best we'd ever tasted. Dix points for presentation, too: how's about this for confectionery? 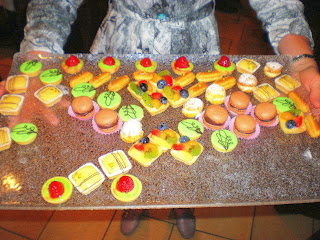 Even so, I was very happy to potter around delis, patisserie and Migros seeing what Valaisian fare was on offer. Bought some choice local meats and was pleased to find seasonal raspberries, apricots and the best cherries ever, many of which I consumed on the balcony of my lodging staring over at the western peaks. 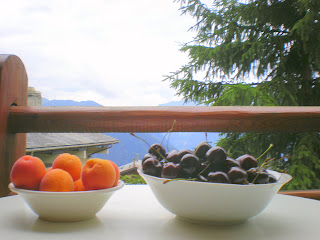 Sorry to hear about the lack of food at the party, but you did get to meet the divine Miss Von.O!
I,ve now listened to Leonskaja (in
D959,and have to agree it doesn't
quite replicate the experience of hearing her live,but it's still a wonderful performance. Roll on the
Wigmore concert in December.

I'd hazard a guess, Paul, that EL's Schubert sonatas were recorded some time ago now, and that she's since entered her majestic prime: if not in sheer accuracy, certainly in human understanding.

Golly, that sounds pompous. But there's no other way of putting it. Anyway, must try and persuade the Wigmore to bring out her recent D850 on their label. And she told me she did all three late sonatas in one programme there - can you imagine?

It does sound as if there were many compensations for your having missed most of the food (and friends), David. Meeting the great Anne Sofie for one ... and Bengt Forsberg - what is this about P Grainger? Tell us more, please!
Have been gorging on summer fruits, as ever - sure you were far more decorous in your enjoyment, but glad to see you had the chance to en profiter quand même.