Christodoulou at the Proms 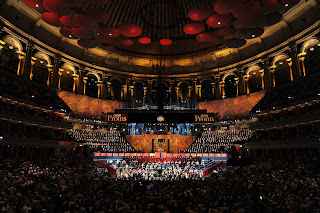 Any reasonably accomplished professional photographer could take a good symmetrical shot like the above, of this year's First Night of the Proms: the Royal Albert Hall and what the BBC sometimes rather garishly does with it at Proms time do the rest of the work. But Chris Christodoulou is no run-of-the-mill man with a camera. He's done some marvellous portraits of conductors in action. Photogenic Dudamel handed it to him on a plate, but last year he also caught, among others, Andris Nelsons looking like I've never seen him before (gurning, to whit).

Actually the problem these days is whether you can get past the artists, and more usually their agents, with a really good, unusual shot. I heard only last week of a certain soprano at the Garden who wouldn't approve any photos of her other than alone - and since she was singing with arguably the greatest, most charismatic singer alive, that was a bit of a problem. Others want airbrushing. But I guess these two images of the great conductors in charge of the first two nights passed untainted. Here's modest, profoundly musicianly Jiri Belohlavek getting reasonably fired up by Mahler's Eighth. 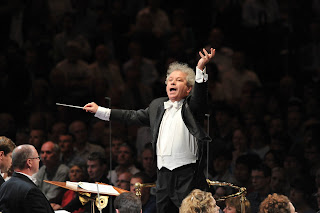 It's always a treat to hear such a piece in such a hall, yet all bar one of the soloists really let it down, as I've regretted on the Arts Desk. No such problems with the Meistersinger line-up the following night. I'd decided to give it a miss so we could hold a birthday lunch for our good friend Niki and go to a birthday drink in a pub in Kentish Town in the evening. Surprise, surprise, when I found the BBC4 relay was delayed until 7pm, I stayed in and had another little weep as Bryn, Mandy and even a much better Raymond Very pulled at the heartstrings. 'Wach' auf' was a tearjerker, too: the WNO Chorus's final tribute to their homegrown superman before the dream team disperses for ever. What a shame, especially since fabulous Lothar Koenigs and the orchestra had just get better, but as Richard Jones said when he came to the class, that's the ephemeral essence of theatre. Chris has captured Koenigs well here. 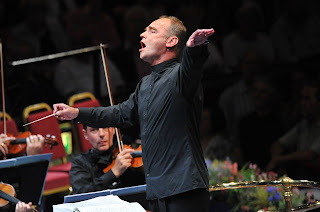 On Sunday, all eyes must have been on Domingo, because Chris's only shot of Pappano is not a flattering one. He may have a good shot of photogenic Vasily Petrenko, too, but that concert last night I missed as I'd been sent to the first night of the Bolshoi summer season at the Garden hot on the heels of putting Wagner's masters to bed in the eleventh and last class of the City Lit term. Spartacus was fabulous, wild, OTT but never to be forgotten. Here's rising star Ivan Vasiliev, a big boy for 21, and all those shields, photo this time by Marc Haegeman for the Bolshoi. 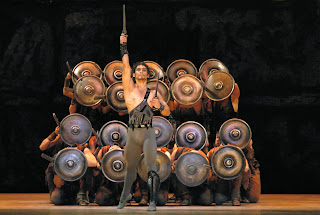 _MAYBE_ it had to do with the sound over the Internet, which actually seemed good to me, but, apart from the David, the Pogner and possibly the Beckmesser, I did not really enjoy what I heard, even from Mr. Terfel. Though his voice did not seem quite as worn as it seemed in Sir Mark's _Gerontius_, it nonetheless did not seem as fresh as it did, say, even five years ago. I have not sampled Act III, though wished to listen to it, having, as previously related, given that act in the Mackerras DVD a pass, so fell back on my now-favourite, an unofficial recording of the 2006 Edinburgh, with Herr Kaufmann as fine a Walther as I expect to hear and Mr. Holl as a Sachs who seemed to grow in stature as the performance went on. Yet I think I should sample this Prom at least as far as the early monologue, or, rather, through it. I can easily do without this Walther and the women. Is not the Magdalene too fruity for the role? I wish Mr. Terfel had made more of "schoene" in his Act-III scene with Eva, as most good sachs' I have heard seem to do. Can you assure me that the Quintet is not a horror zone?

You're in a minority there, JV. Even those who didn't care for Terfel's Wotan - and I wasn't a fan, at least in Walkuere - warmed to this. He did tire by the end but you had to see it as well as hear it - I guess you couldn't over there. Everyone loves Mandy's characterisation of Eva. I personally like a fruity Magdalene, especially one as spirited and lovely as Anna Burford. Sorry for you.

Anyway, five years ago it wouldn't quite have been appropriate for Bryn to sing Sachs. Now most agree he's the right man for the job, even if some like more weight.

The quintet is just glorious.

So you had to go to the Spartacus and endure looking at Vasiliev!!! I do feel sorry for you. Is it just me or are we talking "give our boy Bolle a run for his money?"

Probably not just you but, honestly, I enjoyed the muscularity and the incredible dancing but, no, it's not a Bolle kind of experience for me.

Feel very, very privileged to have been there on a real wow of a first night in London, though. The whole company feeling ran very high and the orchestral playing was like nothing I've heard.

Very well, I must try to give this another go, Act III at least. I wish I had the capability of using the player controls so that, if I wished, I could
jump from the monologue to, say, "O Sachs, Mein Freund," if things were not going well, thus an easier road to the Quintet. I was able to move forward
in the old Radio Player, but not in this one since it and my reading software are not compatible. If I am not repeating myself, did you hear that _GLORIOUS_
Edinburgh performance?

p.s. I liked Mr. Terfel's Proms Wotan. And, as we previously agreed, he would not have been right for Sachs then, at least in appearance, though wish his voice was in the same shape now as it was then.