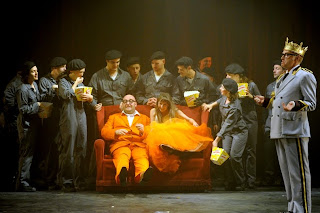 Anticipated my second visit to Grange Park Opera near Winchester very keenly as I wanted to show the diplo-mate the extraordinary, enclosed grounds including wild lake penetrable only by dusty dirt tracks 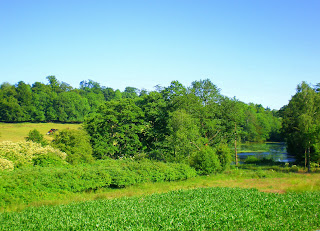 the ruined neoclassical house in the middle of this nowhere 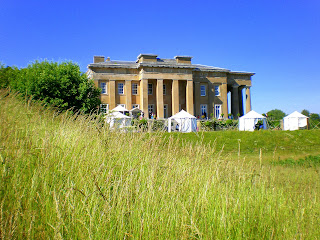 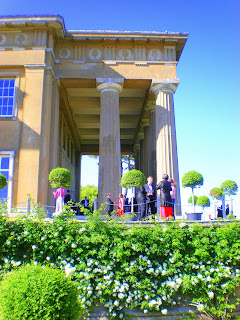 and the spectacular conversion of the Orangery into a pleasant little theatre, complete with kitsch fluffy Swarowski chandeliers that rise before the show begins and the toy train running under glass in the balcony. The first occasion had been to talk on and see a first-rate production of The Gambler two years ago; this time it was more well-squeezed Prokofiev in the shape of The Love for Three Oranges. The three production photos here are by Alastair Muir.

You can now expect shows at Grange Park more or less on the level of Glyndebourne, a notch perhaps above Garsington. Delighted to see that finest of singing-actor tenors, Jeffrey Lloyd-Roberts as the hypochondriacal prince; little did I expect to hear another Welsh tenor of equal quality, and maybe lovelier sounds, Wynne Evans, as Truffaldino. The production was again the inventive David Fielding's: a bit of this, a bit of that, good basic idea of the Eccentrics who put on the show as stagehands, less well followed through. The magic looked good, with Fata Morgana and Tchelio (Vuyani Mlinde - good voice, sometimes shaky musicianship) as rival latterday magicians, she leggy in stockings and Cabaret/Chicago like attire (though less than voluptuously sung by Rebecca Cooper). 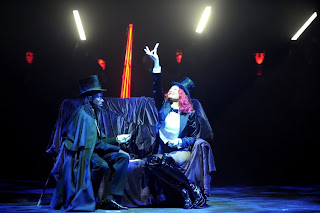 Superb drag cook - Francisco Javier Borda, one of three strong basses in the show - with a giant fridge full of corpses and rotting oranges in the bottom. The ever-waxing oranges are of course cartons out of which pretty French filles pop and flop. 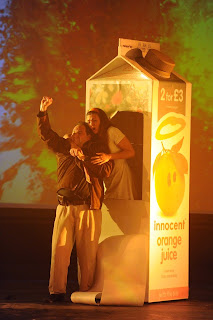 Leo Hussain whipped up a storm from the English Chamber Orchestra in the pit; I've heard it more springily done but never more diabolically.

And, let's face it, culinary opera like this is always going to mesh with the pleasures of the place. We had a superlatively good birthday meal in the restaurant, its crumbling ceiling stylishly netted from harming the punters: 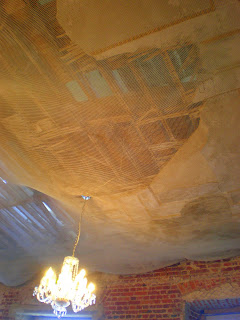 and despite the increasingly noisy, rather unattractive regional crowd - J heard one old man say to his wife in the interval 'you go potty? Me go potty' - it was fun to take tea and macaroons on arrival from the local ladies: still a village-institute feel. But presiding spirit Wasfi Kani continues to do an amazing job, fundraising in hard times to keep the artistic quality, and as I'm a sucker for doggies on stage, I was touched to witness ageing black labrador Ellie following the owner, Lord Ashburton, on to the stage, blinking somewhat incredulously at the audience noise before sitting and lying down patiently during her master's opening speech. Tristan next year, they intend, and why not?
Posted by David at 10:13

Haven't seen 'Love for Three Oranges' since ENO production (end of '80s/early '90s; husband came too, so that dates it vaguely!). This brought back some memories and aroused curiosity. Loved the descriptions of what must be a gloriously shambolic venue. Another delightfully evocative and informative post: thank you.
But see what you mean about the audience, if that quote's an example (isn't it strange how awfulness of that type persists in the mind long after initial shudders?).

Oh dear, they won't like it if I conveyed an impression of the shambolic - it's actually well organised, the art that conceals art.

You saw THE definitive Oranges, Richard Jones's with designs by the Brothers Quay. It can never be surpassed for wit, invention or... scratch and sniff (the thing everyone remembers).

Oops! Constant reader to blame, here. Was thinking more along lines of glorious ruined buildings ... and should have made myself more clear (slapping wrist as I type; don't try it).
Yes, that was a marvellous production, with all the hallmarks of a landmark event; even anti-operatic spouse impressed. Although, in fact, I'd forgotten the scratch and sniff.

I read a significant article about Miss Kani some years ago, and that, combined with an interval interview I heard more recently, show her a quite-lively character. It was further interesting to read/hear about her work in prisons, which hopefully is somehow bearing longterm fruit!

I have yet to read a full review from you of the _Meistersinger_, but must check beyond this first page to find if I missed it.

p.s. That probably should have been "shows her."

'Quite lively' is an understatement. And fruit = fruitcake in the most positive way, I guess.

You can't have seen the Arts Desk review, which is long - big debate about that - but much hit upon:

If you look, you'll become the 3200th or so visitor. Not that I have any idea of the stats on this site, beyond the profile hits..

URICA on my own it turned out, but thank you very much just the same! I regret that the Walther was not quite up to it, but it sounds as if Mr. Terfel continues to mature. I must give the Prom a try, and find out where it takes me.

Did I misspell the familiar Greek word for "I found it?"